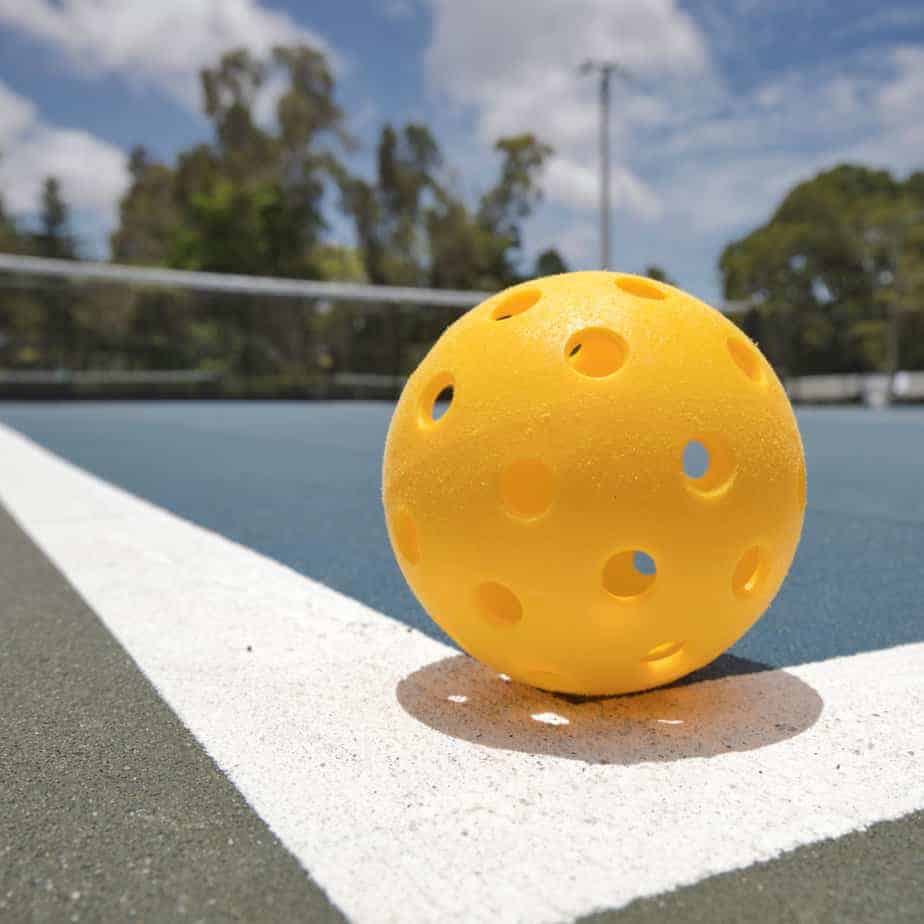 Learning the basic rules to the game of pickleball is essential for any beginner.  But learning them ALL at once can be a little overwhelming.  So that’s why I’ve created this beginner-friendly guide to answer the question “what are the 10 rules of pickleball” so beginners can understand the basics in digestible chunks.

So what are the 10 rules of pickleball?

The 10 rules of pickleball are:
1. Rock, paper, scissors to decide who serves first
2. Serve must land past the non-volley zone
3. In doubles play each teammate is allowed a serve except at the beginning of the game when only one serve is allowed by the 1st serving team
4. The serve must be done underhand and below the waist
5. The serve must be allowed to bounce
6. The return of serve must bounce
7. There are no “let serves” in pickleball
8. Points can only be earned by the serving team
9. Only groundstrokes are allowed in the non-volley zone
10. Games are played to 11; must win by two

I’ve also created a pickleball rules infographic that you can easily print off.  Just click here, and print!

It might sound crazy but the start of a game of pickleball starts with a friendly game of rock, paper, scissors to determine which team serves first. Another way to do it is to flip a coin.

I’ve even played in a group where one side just let the other side serve first because the game is meant to be friendly, and social.

Before you line up and serve, it’s important to know where your serve must land.  If you’re coming from a tennis background, you might be confused about whether or not the serve must land in the no-volley zone or behind it.

But the rule is, that any legal pickleball serve MUST land BEYOND the no-volley zone line.

This is also one of the few instances where “on the line” is out in the game of pickleball.  What do I mean by that?

Well, in most racquet or paddle sports, when the ball hits an out-of-bounds line, it is still considered “in” because it touched the line., This is the case in pickleball except when the ball hits the no-volley zone line during a serve.

In pickleball, the serve must always land beyond the kitchen line.  If it bounces on the no-volley zone line, even just a hair, it’s a fault and the serve is lost.

Fun Fact: The story behind why its called the kitchen is a fascinating one!

Ever wonder why every game of pickleball starts with the score of 0-0-2?  When announcing this score, you’re essential saying, “zero serving to zero – second server.”

It’s a funky rule.  But it helps keep the game balanced and makes the advantage of serving first, a small one.

Rule #4 – The Serve Must Be Underhand And Below The Waist

This is the one rule that anyone with a tennis background will need a minute to adjust to.  A lot of beginners assume they can serve in pickleball like they do in tennis; with an aggressive overhead serve.

This is against the rules.

In pickleball every serve must be done underhand and below the waist or navel area.  Because your serve in pickleball must be below your waistline, this makes overhead serves or even a “side arm” serve impossible…and illegal.

But serving below your waist isn’t the only thing you need to worry about when making contact with the ball during a serve.  The highest part of your paddle while striking the ball must be below your wrist.

This means that topspin forehand serves are limited in the range of motion that they can legally allow.  So, even though many players like to put topspin on their serves, which is legal, the paddle must still be aiming downward and the highest part of the paddle (usually one of the edges) must still be below your wrist.

All of these little nuances to paddle position ensure that a legal underhand serve is done correctly.

Rule #5 – The Serve Must Be Allowed To Bounce

In pickleball, the serve must be allowed to bounce ounce before being returned over the net.  This rule is pretty standard for most racquet or paddle sports.  In fact, anyone coming from a tennis background will feel right at home with this rule.

Remember, the ball must clear the non-volley zone line completely when it bounces but it also must land within the baseline to be “in.”

Typically, most players will aim their serve so that the bounce occurs deep toward their opponent’s baseline.  This strategy essentially pushes your opponent back and keeps them from getting to the net longer.

One more thing, if the serve bounces twice, it is a point for the serving team.  The ball must be allowed to bounce once and only once.

Rule #6 – The Return Of Serve Must Also Bounce

This is a rule unique to the game of pickleball.  And it’s one of these quirky rules that makes pickleball so addictive and fun.

Because it takes away the advantage of serving and actually gives it back to the return team.

By forcing the serving team to have to let the return of serve bounce, you’re effectively allowing the return team to get to the net first.  And, whoever gets to the net or kitchen line first in the game of pickleball usually has the advantage.

This is one of two “equalizer rules” in the game of pickleball.  I’ll cover the other one, in rule #8.

Rule #7 – There Are No “Let Serves” In Pickleball

Another pickleball rule that flies in the face of any tennis lover is the “no let” rule.  More specifically, it’s the no let serve rule.  Meaning when serving in pickleball, there are no “lets” like there are in tennis.

In tennis, if the serve hits the net and lands in or out, the server gets another try.  This is a “let”; as in “let me serve again.”  In pickleball, there is no such rule.

In pickleball, if the serve hits the net and lands out, the serve is lost.  If the serve lands in, play continues.  It’s that simple.

Fun Fact: The no let rule in pickleball wasn’t always a thing.  The rule change didn’t go into effect until 2021.  Meaning until January of 2021, let serves were allowed in pickleball.

Now, with no second serve allowed, it’s even more important to serve it on point and on target.  There are no more do-overs, so make it count!

Rule #8 – Points Are Only Earned By The Serving Team

But if you’re serving and you or your partner hit it out of bounds then no one earns a point.  The serve either goes to your partner (if he or she hasn’t served yet) or the other team earns serving privileges.

This rule is the second “equalizer rule” in my opinion.  This makes it a lot harder to gain points in the game of pickleball so that when you do win a point, you’ve earned it.

Getting to the net is easier for the return team so by default the return team has a slight advantage to win the rally.  But again, if the return team wins that rally, they don’t win an actual point.  They’re just one step closer to earning the serve, which then allows them a chance to win a point.

Simple yet not easy.  That’s what makes pickleball so much fun!

So, what is rally scoring in pickleball?

To keep things simple, in pickleball you’re either earning points as the serving team or you’re earning the serve back as the return team.

This is my favorite rule in all of pickleball!  This is what makes pickleball so unique!  It’s a sport that has one area on the court that requires a specific type of stroke.  A groundstroke.

If you’re going to step into the no-volley zone area or “the kitchen” as it’s sometimes called and hit the ball, it must bounce first. This rule effectively eliminated people from coming up to the net and smashing it.

Because the ball must bounce first when hitting it out of the kitchen, the return shot is not high enough to smash or get aggressive on.  So, it’s usually a soft shot – called a dink.

Now, here’s the crazy part.  The no-volley zone can be entered at any time.  There is no rule saying you can’t stand in this section of the court.  But, the rule is if you’re going to hit the ball from there, it must bounce first.

You cannot make contact with the ball using your paddle or any part of your body or clothing until the ball has bounced first.  Otherwise, it’s a fault and the point is lost.

The final rule here in the 10 rules of pickleball is that games are played to 11 points and you must win by two.

Early on in the birth of pickleball, games were played to 15 or even 21 in some instances but now that the game has become so mainstream and the fastet growing sport in the US for 10 straight years, more traditional scoring methods have been adopted.

Winning by two also extends the game beyond 11 points typically.  So, if it’s 10 to 10, the first team to get to 11 isn’t guaranteed anything.  I’ve seen and played in games that were finally won 16 to 14!

What Are The 10 Rules Of Pickleball – My Final Thoughts

My hope is that after reading this, you’re in a better position to understand the 10 most common rules of pickleball as a beginner just learning the game.

One more time, here they are for easy reference.

The 10 Rules of Pickleball:
1  Rock, paper, scissors to decide who serves first
2. Serve must land beyond the non-volley zone
3. In doubles play each teammate is allowed a serve except at the beginning of the game when only one serve is allowed by the 1st serving team
4. The serve must be done underhand and below the waist
5. The serve must be allowed to bounce
6. The return of serve must bounce
7. There are no “let serves” in pickleball
8. Points can only be earned by the serving team
9. Only groundstrokes are allowed in the non-volley zone
10. Games are played to 11; must win by two