Volleying is a popular move in many paddle or racquet sports, including pickleball. If you’ve watched experienced players, there’s a chance you’ve heard them referring to volleys, and you’ve probably seen a volley in action without knowing it. They’re one of the most popular yet difficult shots to master in the game today, and I’m going to break down the term for you.

This article will also teach you the following details about volleying in pickleball:

When Should You Volley In Pickleball?

The volley is an excellent shot or tool to keep in your pickleball arsenal. If you’re always prepared to volley, you’ll be in position to win more points because more points are won and lost at the net during volley play.

It’s not uncommon for a pickleball match to turn into a fast paced back and forth volley session once the two bounce rule has been applied. For a simple explanation on the two-bounce rule click here.

Make sure your opponent doesn’t go for an overhead smash if you hit it too high, though.

So, when should you try to volley in a pickleball match?

1.  The number one rule on when to volley in pickleball is when you're at the kitchen line and your opponents hits a dink over the net.  If you can hit their dink, or any shot for that matter, without letting the ball bounce - then you should do it.   If you can get to the ball before it bounces for a volley - do it!

2.  If you want to bring your opponent closer to the net, a volley is an excellent option. Most players volley right outside of the non-volley zone (NVZ). It’s hard to volley from the back of the court, so your opponent is much more likely to approach the net if you start volleying repeatedly.

4.  You can also volley to reduce chaotic play styles. If someone’s running and hitting the ball all over the place, short, light volleying allows you to slow the game down to some degree.

A soft volley with backspin can take the pace off the ball and force your opponent to either let it bounce or attempt a volley from right outside of the NVZ.  However, this is a difficult shot, for simple pickleball tips, click here.

5.  When you decide to volley, you'll quickly get a feel for your opponents skill level; particularly at the net.  Banging volleys back and forth requires quick reflexes and plenty of paddle speed.  If you're opponent can't keep up, you've found a weak spot in their game to exploit.

As you can see, there are plenty of times you should consider volleying. While it’s not necessary on every play, volleying is an integral part of pickleball.

Everyone who wants to try the sport should learn the basics of volleying. In the next section, I'm going to cover when you're allowed to volley in pickleball. 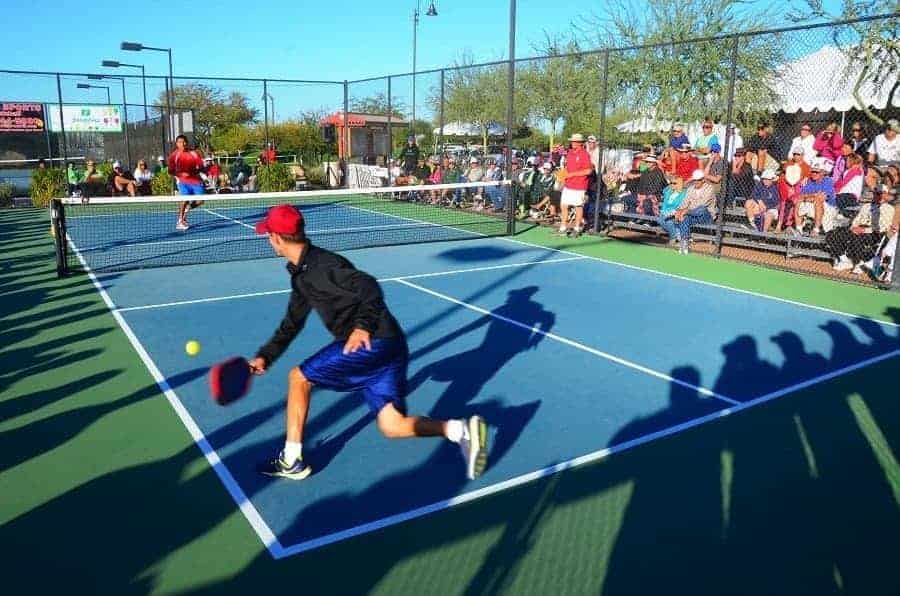 Rules For Volleying In Pickleball

Volleying is a great tactic, but you can’t do it on every shot. A few rules impact when, why, and how you should volley in a pickleball game.

For example, you can’t volley in any direction that would stop the game (i.e., out of bounds).

Can You Volley In The Kitchen?

There’s a seven-foot section on either side of the net.  This section is known as the non-volley zone (or NVZ, as shown earlier in the article). It's also more commonly known as the "kitchen line" fanatics.

If you step into the no-volley zone without letting the ball bounce, it’s a fault. You’re out of luck, so let the ball bounce and choose your next move.

However, if you can reach the ball within the kitchen, without stepping over the line, even thought the ball hasn't bounced yet...that IS legal.  So, if you're tall like me and have long arms to reach over the non-volley zone to get to a ball with moving your feet; then do it!

Quick Tip: All the major 5.0 pickleball experts say if you can get to a ball without moving your feet over the kitchen line, then you should.

Wait For One Bounce Per Side

Before anyone can start volleying, the ball has to bounce once on both sides.

So, the serve must bounce before it is returned.  But, the return of serve must also bounce.  This is particularly difficult for new players who often serve the ball, the rush to the kitchen line and hit the ball off the fly.

You cannot volley the third shot, it must bounce.

For more around the rules of the two bounce rule; click here.

Don’t Volley Out Of The Court

As mentioned above, you can’t volley the ball out of the court, into the net, or anywhere inaccessible. As long as the ball falls on their side of the court, you’re good to go.

Don’t try to volley it too far, or you’ll risk launching the ball out of bounds.

Now that you know what a volley is and when to do it, let's chat about how to perfect it.

How To Perfect Your Volley In Pickleball

There are several types of volleys in pickleball, including reactive, push, dink, roll, and catch volleys. Each move is used on different occasions, so make sure you know which one is right for the moment.

A reactive volley is a simple tap to respond to a quick hit.

Push volleys let you guide and drive the ball to certain spot on the court with force.

Roll volleys rotate the ball to drop with either top spin or backspin.

Catch volleys allow you to momentarily catch the ball on the face of the paddle and take pace off the shot.

With that in mind, let’s discuss how you can improve on all of your volleys.

What Is A Volley In Pickleball - Conclusion

Volleying is an essential part of pickleball. It prevents your opponent from getting too comfortable while keeping the ball off your side of the court. It’s also an excellent way to score quick points.

Here’s a brief rundown of what this post should’ve taught you: