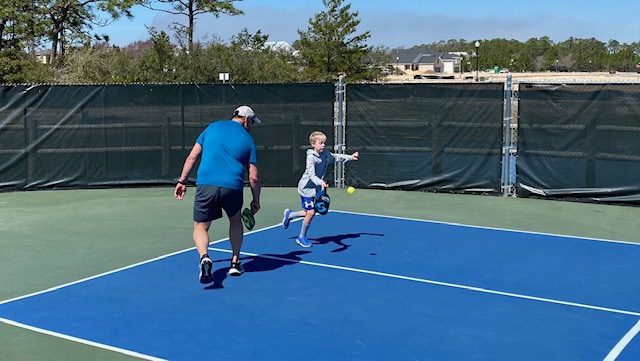 How To Keep Score In Pickleball Doubles vs Singles

Like other racquet or paddle sports, pickleball can become a different game when played with a partner. Not only does the on-court dynamic change when you add a second person, but the way you call the game’s score also does. So, how do you keep score in pickleball when playing doubles versus singles?

Keeping score in doubles pickleball is very similar to singles but with one extra component; an additional number at the end of the game’s score denoting first server or second server.

In the rest of this article, I’ll detail how to keep score in doubles pickleball versus singles. Let’s get started!

How To Keep Score In Pickleball – Doubles

Regardless of singles play or doubles play, in pickleball, only the team serving is eligible to earn a point a fault.

If the rally is won by the return team, then no point is awarded, but serving privileges are given to the return team where they are now eligible to win a point.

This third number in the scoreline denotes which person is currently serving and it would either be 1 or 2.  As in the 1st server or 2nd server.

Additionally, it’s worth noting that the score of the serving team is said first, then the return team’s score, then which server is serving (either 1 or 2).

So if my team is losing 3 to 6 and I’m the second server; the score should be said like this:

Scoring At The Start Of A Doubles Pickleball Game

At the very start of any game of doubles pickleball, the first team to serve begins with their second server. This is done to reduce the advantage of serving first since normally, each team would serve twice.

Because of this, every game of doubles pickleball begins with a score of “0-0-2.” Neither team has scored a point, so the first two numbers are 0 and 0, and the second server is serving, so the last number is 2.

This is a unique way to score and start a game, and only pickleball does it this way.  That’s what makes pickleball, and its rules so unique.

Scoring Throughout A Doubles Game

As the game goes on, teams will rack up points. Once that happens, the same scoring rules seen in singles pickleball apply to doubles pickleball, except with the server number tagged onto the end.

Here’s another example of scoring in doubles pickleball versus singles.

In this same example, if this were singles pickleball, the score would simply be “3-7”

How To Keep Score In Pickleball – Singles

Again, scoring a point in singles pickleball is exactly the same as doubles.  Points are only awarded to the player serving and points are earned when an error or fault has been committed.

When playing singles pickleball and announcing the score, you count the score starting from whoever is currently serving.

An Example of Keeping Score In Pickleball For Beginners

This short example will hopefully help explain exactly how doubles pickleball is scored:

Team A gets to serve first and the second server says, “0-0-2,” before serving. After hitting a few shots back and forth, team B hits the ball out of bounds.

Then, Team A’s second server says, “1-0-2,” before serving. They hit the ball into the net, meaning team B gets to serve next.

Team B’s first server says, “0-1-1,” since they’re losing by one point and their first server is sending the ball over. Team B wins the point.

Then, Team B’s first server says, “1-1-1,” before serving. When they win that point, the score  becomes 2-1-1. If they were to lose their next two serves, Team A’s first server would get their first chance to serve, and the score would be 1-2-1.

Remember, singles Pickleball is scored the same way, but without the third digit.

When Do You Score Points In Doubles And Singles Pickleball?

The serving team scores points in doubles and singles pickleball any time the receiving team faults or fails to return the ball. Return of serve teams cannot earn points. The only special rule that applies to doubles pickleball and not singles is that the two players must take turns returning serves.

Now let’s talk about earning points at various points through a pickleball match.

Winning Points During A Serve

The team receiving the serve doesn’t get points if the serving team makes a mistake. Instead, that team’s turn on serve ends, or they switch to the other player if they haven’t done so already.

However, if the receiving team commits an error, a point is awarded to the serving team. There are a few examples of this on a serve, including:

Volleying off a Serve

In pickleball, the serve must be returned after it bounces once. So, any player returning the serve before it bounces – or “volleying the ball” – has committed a fault, therefore, giving the serving team a point.

In doubles pickleball, players must serve to the opponent on the opposite side of the court diagonal to them. If the other player decided to hit the ball for whatever reason, that’s a point for the serving team. In singles, this rule doesn’t apply.

Points Won During a Rally

If the team receiving the serve fails to hit the ball over the net at any point during a rally, that counts as a point for the serving team.

You can also win points if the receiving team hits the ball outside the boundaries of the court at any point in the rally.

Players Volleying Inside the No-Volley Zone

The No-Volley Zone is one of the most important areas on a pickleball court and one where players can commit a fault or foot fault, leading to points for the serving team.

Extending seven feet out on both sides of the net is the no-volley zone, or “the kitchen.” If any part of a player (in the air above the zone or on the ground) enters the no-volley zone and hits the ball before it bounces, a fault has been committed. Doing this will result in either a point for the serving team or a loss of serve for the serving team.

The way you score pickleball doesn’t change much from doubles to singles. The main factor that leads to confusion is that there are two serves in doubles, whereas there’s only one in the singles game.

When playing doubles, remember to keep track of the score and which serve your team is currently on to avoid confusion. If you do that, everything else will fall into place.