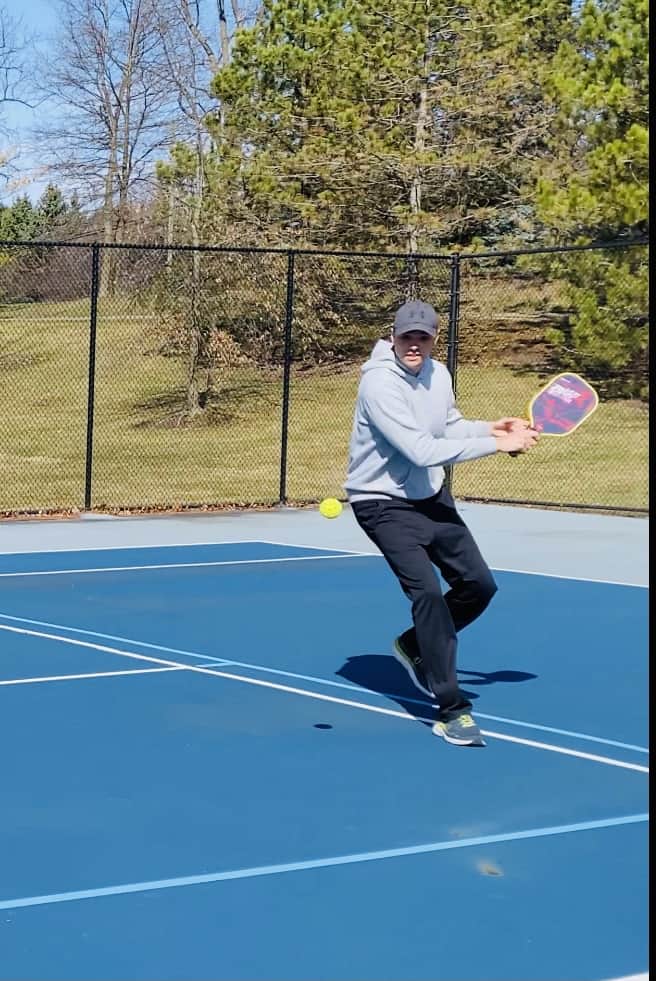 An Illustrated Look Into 23 Simple Pickleball Strategies For Beginners

The five most effective pickleball strategies for any player are:
1.  Always hit deep on the serve and return of serve
2.  Hit at your opponent’s left foot as much as possible
3.  Avoid giving your opponent an attackable ball - minimize low to high shots
4.  When in doubt, hit down the middle and to your opponent’s backhand
5.  Get to the net and just keep it in play

Even if you just follow those five simple pickleball strategies, no matter how inexperienced you may be, you’ll see your team winning more games.

But just because advanced players use them, doesn’t mean they’re complicated.  In fact, the pickleball strategies I’m going to cover in depth today, can be used by virtually any player; regardless of skill level.

To keep things simple, I’m going to break down each pickleball strategy as if we were playing through the point in a doubles game. Let’s get started.

Simple Pickleball Strategies For The Serve 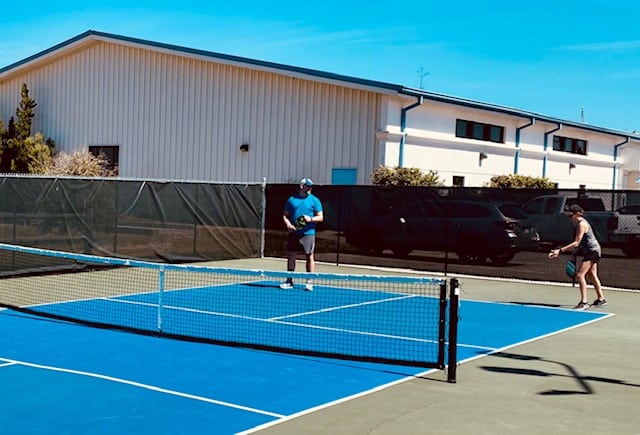 Strategy #1
I hate to be captain obvious here but, never ever commit a service fault.  Any good pickleball coach will tell you to cut down on the number of unforced errors.

The easiest way to do that is to keep your serve simple, consistent and in play. Avoid fancy serves if you’re spraying them all over the court.

Strategy #2
If possible, always serve deep.  One of the fundamental tactics in pickleball is to go get the net, so by serving deep, you can help drive your opponent back as far as possible.

This can help set up a weak return, making it easy for the serving team to hit a drop shot and get to the kitchen line.

Strategy #3
When serving, always aim for your opponents back hand.  It’s a more difficult shot for them to execute.  So, if your opponent is right handed, then aim for their left foot.

Pepper that left foot and force a deep backhand return.  This works regardless of which side of the court you’re serving to. 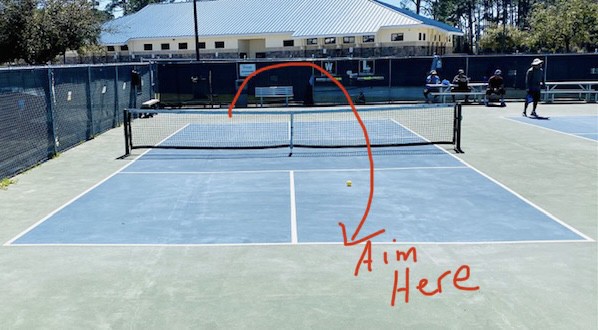 If you're serving from back to front, aim for where the opponent's left foot would be.

Strategy #4
If you’re the server’s partner, be ready!  Play back at the baseline and be ready to hit the ball.  The return team does not have to hit back to the server, they can hit at you.  So give yourself room for the ball to bounce and be ready!

Quick Tip: For more on the double bounce rule and why it was implemented click here.

Simple Strategies For The Return Of Serve 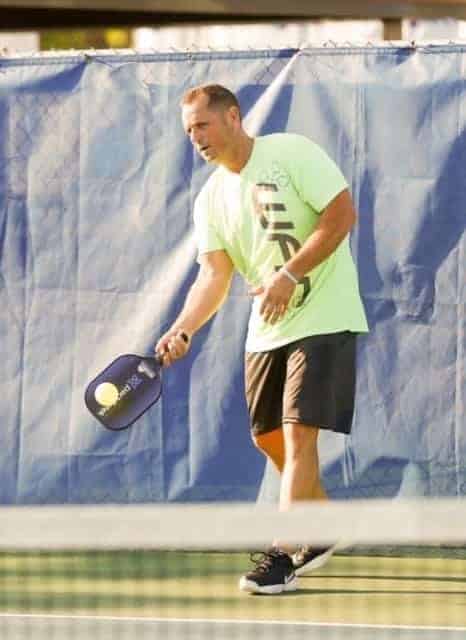 Strategy #1
Keep the return of serve in bounds.  Avoid unforced errors and keep the ball in play at all costs.  Don’t “gift” your opponent easy points that don’t require anything on their part

Strategy #2
If possible, hit the return of serve deep. Aim for the baseline the server hit from. This keeps them away from the net for a long as possible.

Strategy #3
Aim your return shot at your opponent’s left foot, forcing a backhand shot. Again, a deep backhand shot that lands by their left foot makes it harder for the service team to execute a drop shot.  Like I said above, this tactic works regardless of which side the serve comes from. 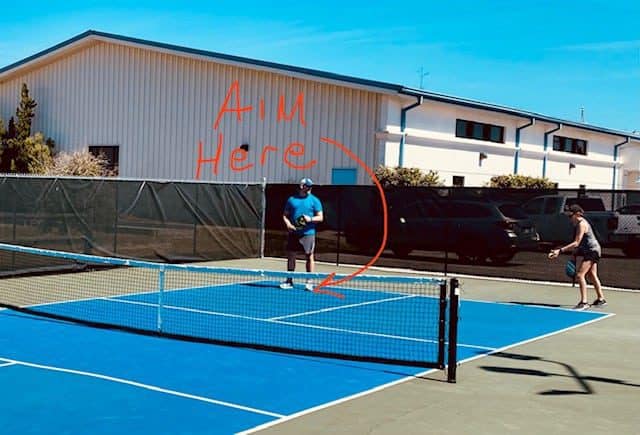 When returning the serve, aim at your opponent's left foot - forcing a backhand shot.

Strategy #4
If you can’t hit at your opponent’s left foot, aim down the middle over the center of the net.  The net is lower at the middle and shots hit down the middle can cause confusion for the service team.

If the ball is hit cleanly, right down the middle of the court, and the serving team doesn’t call out whose ball it is, then you’re most likely going to win the point.

Strategy #5
The third shot drop is the ideal shot for the serving team’s next hit, so make it difficult for them to set up for by using the strategies I just mentioned

Quick Tip:  For more on where to specifically stand, read my helpful guide here. 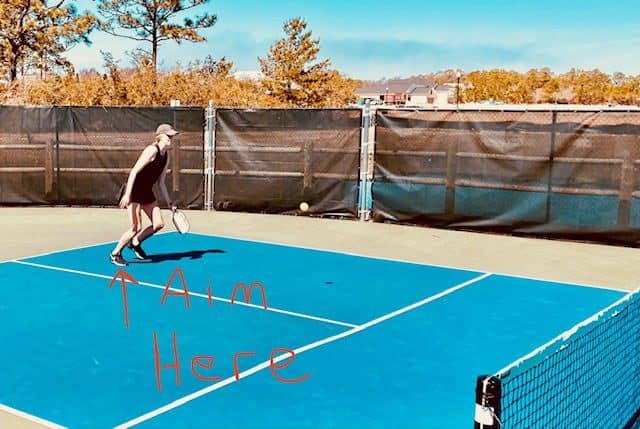 For left handed players, aim at their right foot to force a backhand shot.

Simple Strategies For The Third Shot

Strategy #1
The third shot is so crucial for the serving team, so get it right!  The trick to any third shot is to keep the ball down or low.  The reasons for this is because your opponents will most likely already be at the no-volley zone line.

Strategy #2
If your opponents are at the net, the worst thing you can do is hit what 5.0 player Dave Weinbach calls an “attackable ball.”  Attackable balls are generally hit low too high - effectively teeing up a ball for your opponent to “attack” on.

To Illustrate this, take a look at the series of pictures below.  These are third shot drops hit at me.

The first, is hit way too high, I'm going to blast it back.  This an attackable ball.

The second is a little better, it's lower and forces me down but it's not forcing a true backhand.

The third pic illustrates where the ball should be to force a backhand volley, but again it's relatively high and I'm not out of position.

The fourth picture shows the ideal shot.  It's low, not attackable, and is absolutely forcing me out of position to reach for a backhand ground stroke across my body.

The last pic illustrates a tough shot for a lot of players to get back over the net.  This is the strategy you want! 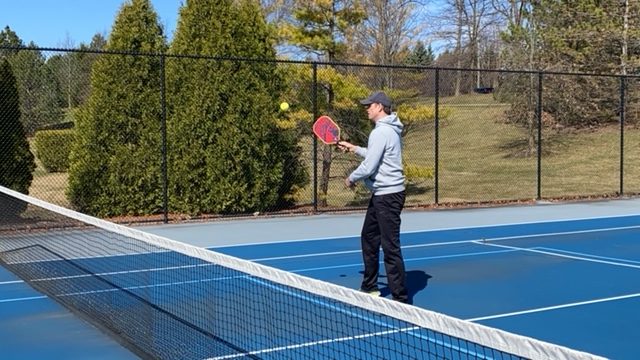 This is too high because I can. attack it. 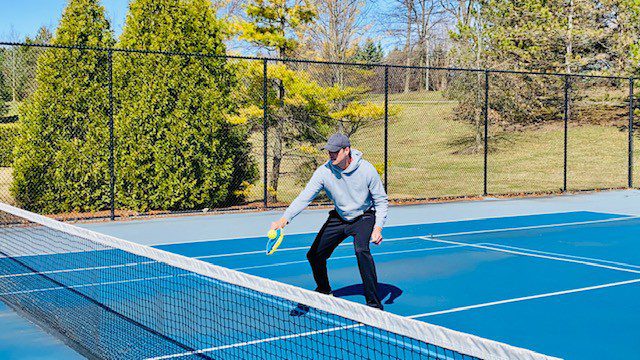 This is slightly better because its low, but its not hit at my feet. 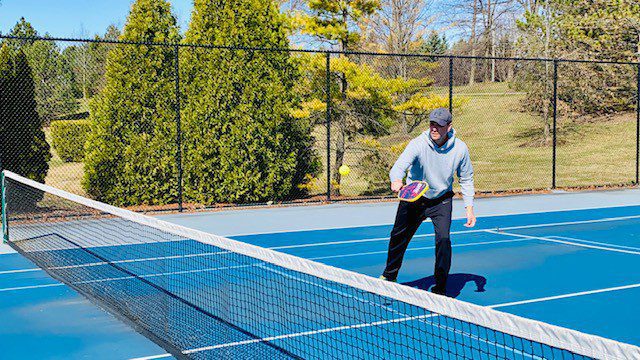 This is better because its forcing a backhand shot but it needs to be down at my feet. 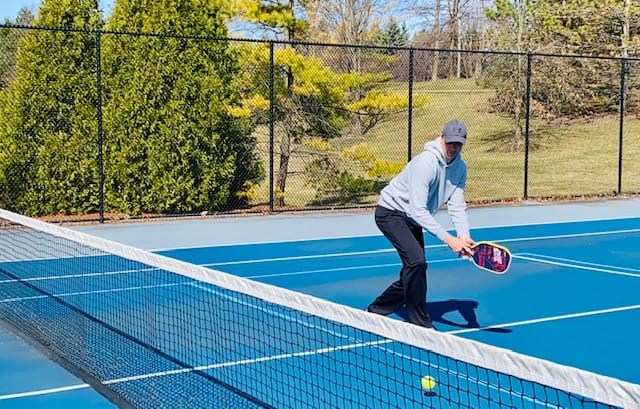 This is where you want to hit the ball!  Its low, hit at my feet and a difficult backhand!

Strategy #3
The best third shot is the drop shot.  This is a shot that has its highest arc point on your side of the net and drops lightly into the no-volley zone.  This can be a challenging shot, especially if the serving team is still back at the baseline and your opponents are at the net.

Be patient, this shot requires a lot of practice.  For a thorough walk-through of the process, my friend Barrett created this helpful guide. 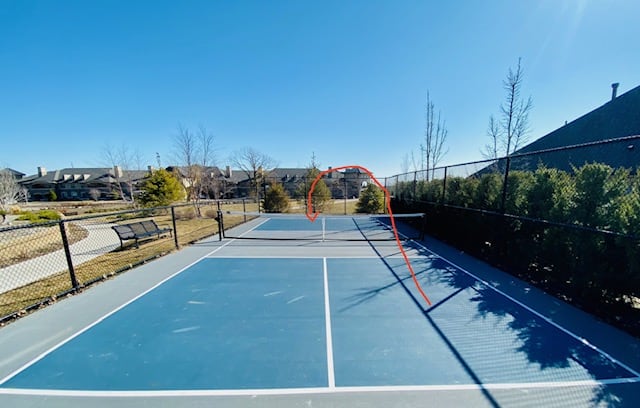 When hitting the third shot to the far end of the court, aim right where the arrow is pointing in between your opponents with the ball just slightly on the inside left of your opponent's court.

Strategy #4
If your opponents are at the net, and an effective third shot drop is not in your arsenal of shots yet, then the next best shot is to hit what is known as a “drive shot” at your weakest opponent’s left foot.

This is where you drive the ball low over the net with a fair amount of speed, forcing the weakest opponent to hit a backhand.

Strategy #5
Another drive shot option is to hit the same type of shot but down the middle. When hitting down the middle, aim for your opponent’s left foot if they’re on your left side or the right foot of the opponent lined up on your right side.

This forces your opponents to decide whose ball it is (confusion is a good thing) and it also forces only one player to get a forehand on your ball (the player on your right if he or she is right handed).

Strategy #6
If a drive shot or a drop shot are not available to you, the safest strategy here is to just hit down the middle as softly as possible.

Strategy #7
The final scenario to cover here is, if your opponents are not at the kitchen line, aim for the feet of the opponent who is furthest back.

Strategies For Dinking At The Net

Strategy #1
My number one dinking strategy when at the net, is always keep the ball as low as possible.  Keeping the ball low, keeps your opponent from attacking. 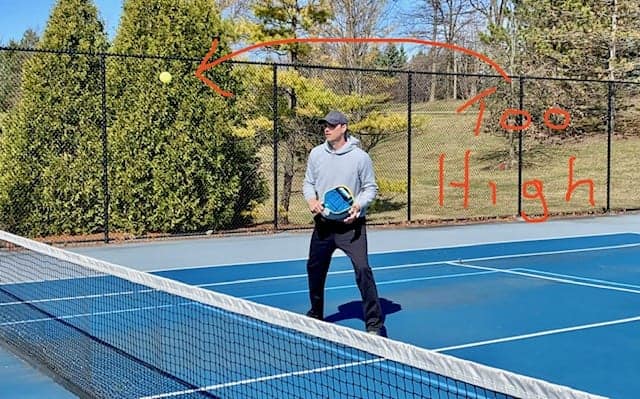 Strategy #2
My number two dinking strategy is to dink safely.  Don’t over complicate it.  Play it safe and hit high percentage shots that keep the ball in play.

Strategy #3
Hitting high to low is ideal when at the net.  This allows you to play more aggressively and put points away.  Hitting low to high is not ideal.  This tees up an "attackable ball" for your opponent. 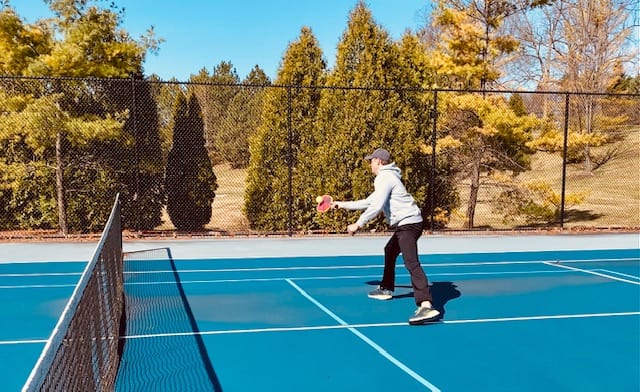 This ball is still just high enough for me to attack on it with my forehand. 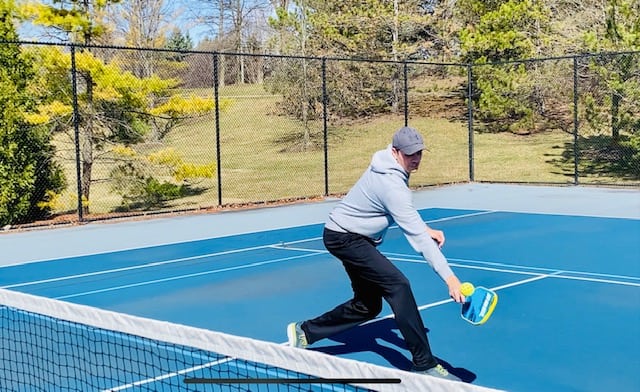 This ball is forcing me to hit low to high and with a backhand.  If you're at the net, force your opponent into this kind of dink.

Strategy #4
Hit as many low, conservative dinks as it takes for your opponent to then have to hit low to high - teeing up an attackable ball for you.

Strategy #5
If you’re the one being forced to hit low to high, keep the ball as low as possible.  The highest point of the ball should be on your side of the net or over the net itself.  This is not an easy shot so be patient and practice.

Strategy #6
Like a lot of the strategies we’ve discussed, hitting at your weakest opponent’s backhand is always a good idea, even when dinking at the net.  It sounds mean but it happens all the time.

Even 5.0 Pro Simone Jardim, an outstanding female player, admits that even in pro level tournament play, the weakest player gets targeted way more.

The picture below illustrates where to aim at a right handed player's left foot when dinking at the no-volley zone. 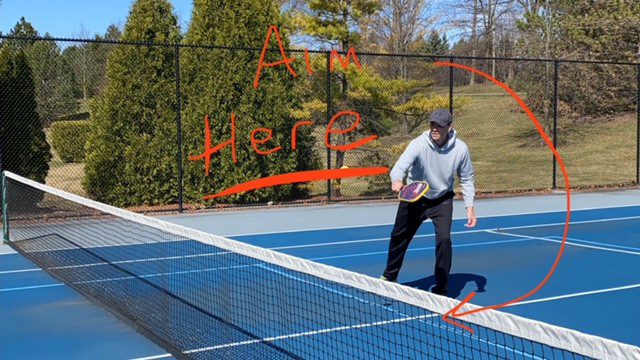 When you back up, you're purposefully taking yourself out of position. If you can reach the ball before it bounces, do it! 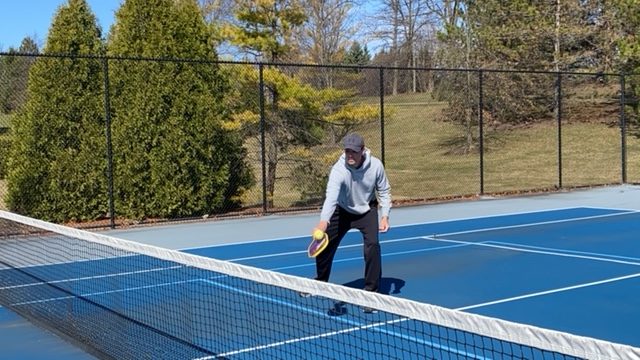 I could have backed up a step and let the ball bounce because it was hit near my feet, but I stayed planted and reached out to a hit a soft volley dink without getting out of position.  This is idea.

I hope you found this info helpful.  As you can see, some of these pickleball strategies are simple in nature - making them easy for any player of any skill level to implement.

However, executing on these strategies takes practice.  It takes practice to hit at your opponent’s feet.  The concept is simple, but the execution takes intentional effort.  The more you do it, the easier it’ll become.

Probably the hardest strategy to implement of all the ones I’ve outlined is the third shot drop.  It’s the game’s most difficult shot.  So don’t get discouraged.  Take your time, practice it and in the meantime try implementing the other strategies I’ve mentioned.

I feel that over time, you’ll begin to see a difference and win more points.

The fun part is that these pickleball strategies are ones all the pros use!  However, there is nothing overly complex here that makes them virtually impossible for beginners or developing 3.5 level players to attempt.

So, just have fun with it!  Give them a try, teach them to other people and grow this wonderful game.  Happy pickleballing!