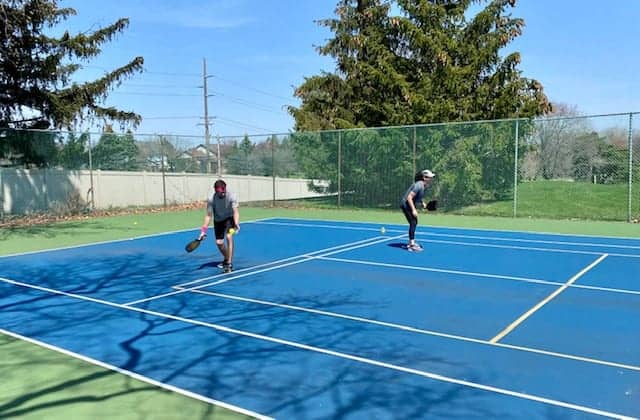 One of the first sets of rules explained in pickleball to any beginner is the rules around serving. While the serving rules in doubles pickleball are similar to singles pickleball, the subtle differences can be a little confusing.  So, if you’re just learning the game and want to know all about pickleball doubles serving rules and how they’re different from singles play, then you’re in the right place.

Doubles pickleball serving rules are nearly identical to singles play except for one difference.  In doubles pickleball, both teammates get a chance to serve, before serving privileges go to the other team.  However, at the start of the game, only one player on the original serving team gets to serve.

If you’re still a little confused, don’t worry.  Keep reading and I’ll explain everything you’ll need to know about doubles pickleball serving rules.  I’ll even go in-depth about all the tiny details so it all makes sense.

By the end, you’ll understand all the nuances of serving rules in doubles pickleball. In addition, you’ll be able to explain them and teach them to new players wanting to learn the game.

One of the most confusing things for beginners in doubles pickleball is understanding the serving order.

Doubles pickleball is different in a few ways. Let’s break it down.

Choosing The First And Second Server

Before starting a game of doubles pickleball, each team chooses its first and second server. This will be the serving order for the rest of the game. If one player in a team is a strong server, the team that serves first will normally choose them as the second server.

I’ll explain why in a minute.

You can decide which team serves first in a game any way you want, but one of the classic methods is through a coin toss or my personal favorite – a game of rock, paper, scissors. The winning team serves first, and this is where choosing your first and second server becomes important.

The second server on the team that won the coin toss is the first to serve at the beginning of every pickleball game. That might sound confusing, but it makes sense because service transfers immediately to the opposing team once that first team loses a point.

Again each teammate gets a chance to serve.  But at the very beginning of the game, the first team to serve only gets one crack at it.  This is why the start of every pickleball game is scored “zero, zero, two” as in 0-0; second server.

If that second server wins a point, they keep serving.  If they lose the point, the serve goes to the other side.  The teammate on the original serving team that didn’t get a chance to serve, won’t get that chance until that team wins the serve back.

Pickleball is the only mainstream racquet or paddle sport with this rule for doubles play.

Who Serves Next In Pickleball?

At that point, everybody on the court will have served once, and if a point is lost on that serve, the player who started the game serves for a second time.

Looking for a beginner-friendly guide to more common rules?  Click here for 7 rules in pickleball that every beginner should know.

Where To Serve From In Doubles Pickleball

The service area in doubles pickleball is the same as in singles. Players must send the ball to the opposite diagonal area from where they serve. Every time a team wins a point, the two players on the serving team switch sides so the server is always sending the ball to different sides of the court.

If a team loses a point on its first player’s serve, the second player serves the next point from the side of the court they were on for the previous serve.

In other words, the team serving the ball will alternate which side the current server is serving from as long as they’re winning points. If the team loses a point on the second serve, the opposing team serves next.

Where exactly on the service line should you line up?

Whether it’s single or doubles pickleball, you can line up anywhere along the service line on that specific side without crossing over the centerline.  I usually line up in the middle of the service line but I sometimes cheat in towards the center line to get a slight advantage based on how my opponent is lined up.

How Many Serves Are There In Doubles Pickleball?

How many serves there are in doubles pickleball depends on the stage of the game. If it’s the very first serve in a game, only one player gets to serve until a point is lost. After that, each team gets to try to hold serve twice, once per teammate.

Throughout a match, service could change several times if opposing teams can break serves. On the flip side, a very good team at holding serve could win a game with only one player serving.

How many serves do you get if the ball hits the net during a serve?

Serving in pickleball is relatively simple, and according to USA Pickleball, it isn’t necessarily used as an offensive tool or weapon. In other words, the goal of the serve is to start a rally and keep your opponents as deep as possible.

The rules make it similar to hitting a regular groundstroke, but I’ll cover more about that below.

The server must hit the ball underhand in pickleball, making contact below the navel. This is to ensure a fair first shot in a rally. Players who hit the ball above that point break the rules and therefore forfeit their turn to serve in favor of the other team.

A rule update from 2021 allows players to hit serves ‘off the bounce’. This means they can drop the ball onto the ground and hit it into play rather than hitting it straight out of their hands. The International Federation of Pickleball made the rule change because some players find this shot style easier to make.

It’s worth noting that this is a “drop serve” rule, not a “bounce” serve.  Bouncing the ball (like a basketball) before hitting it is not allowed.  You must hold the ball out and simply drop it onto the court for the drop serve to be legal.

Hitting To The Service Area

You must serve the ball into the opposite diagonal area on the opponent’s side of the court, preferably to the opponent’s backhand, as this is the most difficult type of serve to return. If the shot falls outside the lines of the service area, the serve is lost.

Serving Behind The Line

If a player steps on or over the baseline before making contact with the ball, it’s a ‘foot fault,’ leading to a lost serve.

The Return Of Serve

Pickleball doubles serving rules state that the player returning the serve can only do so after the ball has bounced once on their side of the court. The serving team wins a point if they hit the ball before it bounces or if the return goes out of bounds.

Once the ball has hit the court, the returning player can hit the ball back to the other side and begin moving up to the kitchen line.

Editor’s Note:  Ever wonder why it’s called the kitchen?  The answer may surprise you.

For players new to pickleball, it may seem like there are a lot of rules to wrap your head around. And these quirky doubles serving rules can be even more confusing.  But, my hope is that after reading this guide on doubles serving rules, you’ll be able to play more confidently and even help teach new players the nuances of these rules.

If you get out on the court and follow everything written here, you should be used to the rules after a game or two. So, get out and enjoy!