What Is a Pickleball Made Of? The Answer May Surprise You…

Pickleball is a unique blend of tennis, badminton, and ping pong that people of all ages and abilities can play, whether in a church parking lot or at a national-level competition.  But you can’t use a tennis ball, birdie, or table tennis ball to play pickleball!  So, what is an actual pickleball made of?

A pickleball is made of a lighter plastic compared to a standard wiffle ball and has varying levels of durability along with drilled-in holes. Indoor pickleballs are smoother, weigh 0.8 oz, and 26 holes. Outdoor pickleballs weigh 0.9 oz, have 40 holes, and are less affected by the wind.

There are also other kinds of pickleballs being made to be quieter during community play...read on to hear about these top-secret pickleballs.

If you’ve ever played or watched pickleball and wondered what that ball was made of, you’ve come to the right place.  This article will take a deep dive into the world of pickleball balls and hopefully answer all of your questions.  By the end, you’ll be an expert in all the different kinds of pickleballs that are available.

Related: Click here for my absolutely favorite paddles and the one I'm playing with the most right now.

What Is A Pickleball Made Of?

During the first 50 years of pickleball, players used a Cosom ball for indoor and outdoor play.  At the time, Cosom was a kind of plastic ball brand that had larger holes drilled into the ball.  This made the ball slower and it was affected by wind a lot more.

It also wasn't ideal for indoor play where wind wasn't a factor.

However, over the last ten years, pickleball has evolved tremendously.  Cosom isn't played with anymore and we have drastically different pickleballs based on indoor use or outdoor use.

With the International Federation of Pickleball and USA Pickleball development, there’s now equipment regulations, ever for pickleball balls.

So, what are today's regulation, tournament approved pickleballs made of?

Regulation pickleballs are made of a light plastic material. Typically, it’s injected into a mold and then cooled to harden.  Next, the manufacturer drills equal-sized holes into the pickleball, giving it that classic pickleball appearance.

Pickleball Ball Fun Fact:  Regulation pickleballs have between 26 and 40 holes in each ball, depending on their purpose and the manufacturer's preferences.

There are two main types of pickleballs, indoor and outdoor, each with different characteristics to match its court.

You don't want to play with an indoor ball outside or vice versa.  Trust me, I've made this mistake.

Other Helpful Info:  Paddle shopping and don't know how to choose between a graphite paddle and a composite paddle?  Click Here. 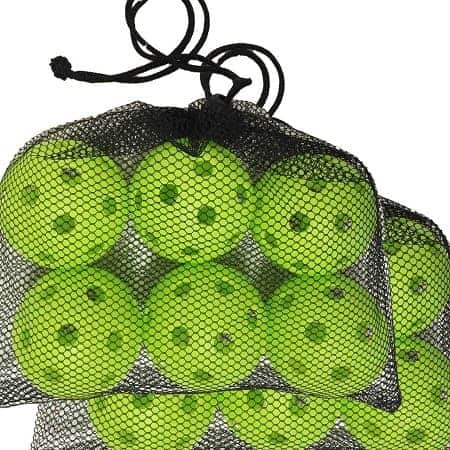 What Indoor Pickleballs Are Made Of

As you probably guessed, indoor pickleballs are meant for indoor courts.  A  significant difference between indoor and outdoor pickleball courts is the playing surface, which tends to be much softer and smoother for indoor playing.  They’ll be more like wooden gym floors, therefore much less destructive to your ball.

The first prominent defining feature of an indoor pickleball is the durability of its plastic.  It’s made with a much lighter and softer plastic to adapt to the smoother surface.

Indoor pickleballs also have fewer holes, usually about 26, and many people don't know this but - they’re a little bit larger than outdoor pickleballs.

They’re also a bit less bouncy than an outdoor ball, giving the players more control during a serve.

An indoor ball weighs about 0.8 ounces (22.68 grams), just a bit lighter compared to an outdoor ball. The lighter weight makes it more difficult to generate power with each pass, resulting in more extended volleys between players.

All these engineering facts make the indoor pickleball perfect for indoor play. You could say it's designed to maximize and compliment indoor pickleball.  You just won't get the same style of play with any other kind of ball.

While some may prefer the weight, the lack of power is considered a drawback for many experienced pickleball players. Overall, an indoor pickleball's lifetime will vary, but it’s more likely to become too soft over time than it is to develop cracks.

Either way, you'll want to replace it.

If you prefer a lighter ball, using an indoor pickleball outdoors is possible...it's just not recommended.

If you do, keep in mind that its lighter weight means that it’s more likely to be affected by the wind. It’ll also wear out much quicker since it’s not meant for hard surfaces like concrete or asphalt. 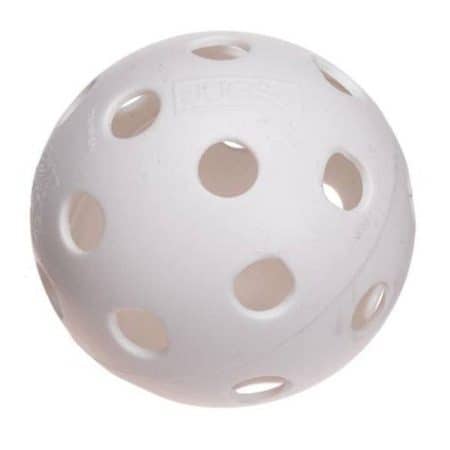 What Outdoor Pickleballs Are Made Of

Outdoor pickleballs are — believe it or not — meant only for outside courts. Because you’re more likely to be playing on tennis courts and on other hard, rough surfaces, outdoor pickleballs can handle a bit more wear and tear.

They’re made of much heavier and more durable plastic, ensuring they last longer despite hard surfaces or exposure to the elements.

An outdoor pickleball weighs about 0.9 ounces (25.51 grams), making it only slightly heavier than an indoor pickleball. However, that slight difference in weight can completely change the game.

For example, the heavier ball allows players to have a lot more power behind their hits, making the game a little more intense and fast-paced. Also, since they’re meant for the outdoors, the extra weight means that the wind won’t have too much of an impact.

Outdoor pickleballs are less commonly used on indoor courts, as they don’t do well on the softer surface. They also tend to crack more frequently than indoor balls because of the exposure to rough surfaces and elements.

Personally, I tend to blow through way more indoor pickleballs than I do indoor balls.

Noise is an ongoing problem for many pickleball courts especially those outside tied to parks.

Park districts and residential areas are often reluctant to build pickleball courts because of the loud thwack that comes from the plastic ball hitting the wooden paddle.

There have even been court cases about it.

The ball’s holes make the noise much louder than hitting a solid ball with a wooden paddle.

However, one manufacturer, Gamma, solved this problem by creating a new and improved quiet pickleball made of foam!

While this ball isn’t allowed for official tournaments, it’s an excellent option for those who want to minimize the court's noise.

However, if you decide to go this route, keep in mind that this foam ball is lighter than standard pickleballs, thus won’t play the same.

Beyond the types of balls and what they’re made of, there are a few other things you might be interested in knowing about pickleballs.

For example, did you know that USA Pickleball has specific requirements for balls that are allowed to be used in tournaments?

USA Pickleball has a list of balls that have been approved for use at the tournament level. This list includes 61 specific balls with a variety of colors, styles, and manufacturers.

To meet the International Federation of Pickleball standards, a ball must be one color, although they tend to be yellow, white, or orange, depending on the color of the court. Otherwise, the only requirement is that they’re standard sizes and weights.

Some of the big players in terms of pickleball producers are names that might be familiar to you. For example, Wilson Sporting Goods is a well-known brand producing equipment for all kinds of sports.

Their TRU 32 ball was added to the list in 2019 and brought out the best components of pickleballs into one ball. It’s made using a mold and thermoplastic resin with 32 equally spaced holes on the ball.

ONIX, a lesser-known mainstream brand but well known among avid pickleball players, is one of the more popular manufacturers of USA Pickleball-approved pickleballs.

They produce one of the most commonly used balls in pickleball tournaments, the ONIX DURA Fast 40.

Named after the number of holes punched into the plastic ball after production, this ball is one of the highest quality balls available to pickleball players.

The Dura Fast 40 plays fast, hence the name, and is one of if not the most popular outdoor pickleballs ever!

I've heard some leagues only play with the Dura 40.  It's that popular.

Pickleball is a unique and fast-paced sport with growing popularity in the United States. It requires little in the way of equipment, but players are serious about their balls.

If you’re playing in pickleball tournaments, you can reference USA Pickleball's list of 61 approved balls.

Clearly, a lot goes into choosing the right pickleball. While most are made by injecting plastic into a mold, there are still many differences to consider.

Most importantly, whether you’re playing indoors or outdoors will play a significant role in the ball you play with. Otherwise, you have many options from trusted manufacturers to choose from.

But all of them will most likely play similarly and be more than sufficient.  So, if you're still learning the game, choose one and just play.