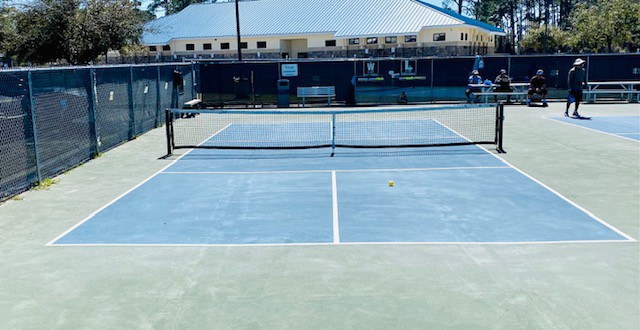 A temporary pickleball court is relatively easy to put together, especially if you already have a tennis court or other similar playing surface. All you need is a net and some lines to make your own court.

Temporary pickle court lines can be made with tape or chalk, depending what kind of surface you're working with and how long you want the court to last. Vinyl 'EZ' lines are also available as kits that can be set up anywhere.

Read on to learn more about temporary pickleball court lines, including how to make them and where to put them.

Related: Did you know that a pickleball net is actually not the same height as a tennis net?  If you think they're interchangeable, think again.

Best Materials To Use for Temporary Pickleball Court Lines

The best materials to use for a pickleball court depend on where you'll be setting it up and how long you want it to last. The most popular options are chalk and tape, and there are many different kinds of chalk and tape to choose from.

Each has its own pluses and minuses.

If you're looking to go big and actually paint down permanent lines for a pickleball court - read my full guide here.

Many people choose to make a pickleball court indoors, whether that be in a gymnasium, basketball court, or another large meeting space.

The best materials to use for a temporary pickleball court that's inside include the following:

There are many great places to make a pickleball court outside, from a tennis court to a driveway or even a parking lot - it’s all possible.

The best materials to use for a temporary pickleball court that's outside depend on which kind of surface you'll be using, and include the following:

As you can see, a lot of the same products can be used to make temporary pickleball court lines regardless of whether it's an indoor court or an outdoor pickleball court you're trying to make.

I've made countless outdoor courts for driveway pickleball and a simple court line kit and some sidewalk chalk easily do the job.

If you're making a pickleball on a tennis court, whether it's indoor or outdoor, I'd recommend a court line kit and some tape to clearly establish the out of bounds lines and baselines.

Trust me, it'll reduce confusion with the tennis lines that are already on the surface.

A Few Things To Keep In Mind

A pickleball court is 20 feet wide and 44 feet long, smaller than a tennis court. In most cases, this means that it will take 198 feet of tape to draw the lines of a pickleball court.

Pro Tip: Most rolls of tape come with 180 feet of material, so that means that it' would take more than one roll of tape to make a full pickleball court.

If you use chalk, you'll need about three chalk sticks per court, and if you use vinyl court lines, you'll need two sets to make one complete court.

This allows between each of the pickleball courts and the baseline. 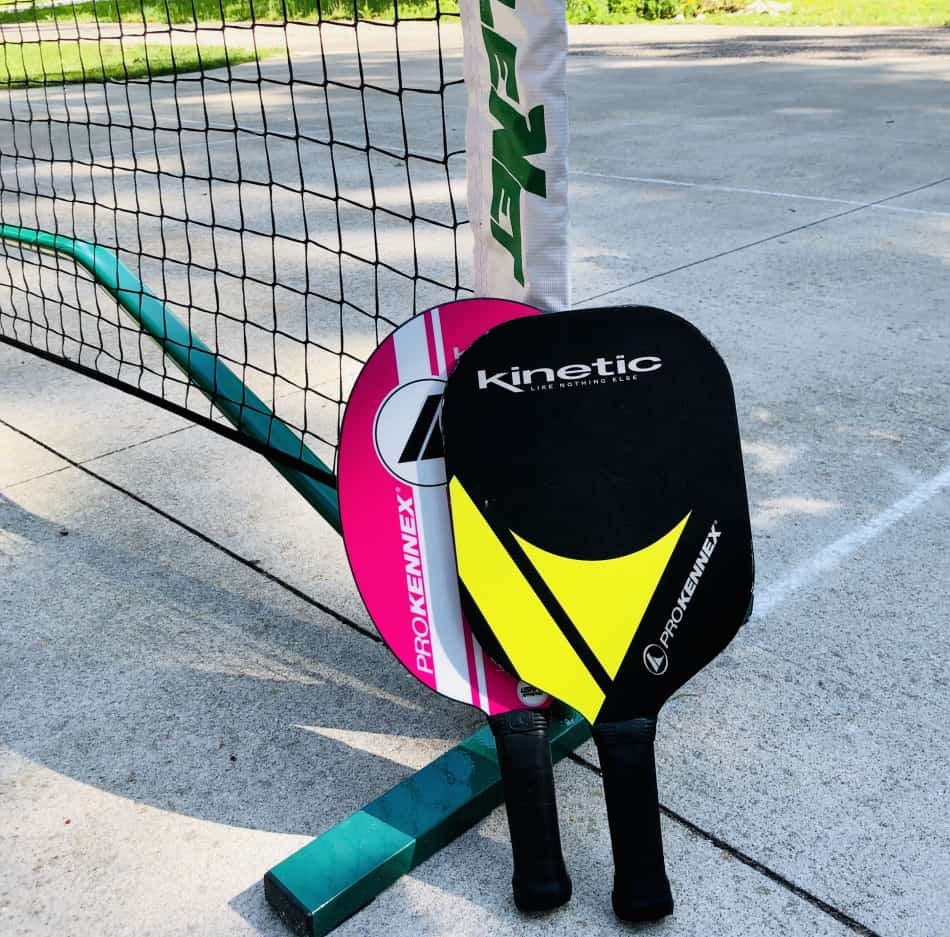 The white lines I made with chalk here don't stand out enough.  Don't make the same mistake I did, use a brighter color.

Temporary pickleball courts can be set up on a number of surfaces, from basketball courts and volleyball courts to inline hockey rinks.

However, the most common surface to be temporarily repurposed for pickleball is the tennis court.

If you're setting up a pickleball court or courts on a tennis court, there are a number of different layouts to consider.

One Pickleball Court Per Tennis Court

A simple way to set up a pickleball court is to lower the tennis net by two inches, then tape lines down the side of the court to create a 20 foot by 44 foot rectangle.

You can lower the net easily by tightening the center strap on the net. If this makes the net too tight, you can also adjust the tension with the ratchet on the net post.

Additionally, you’ll use two portable pickleball nets for each court since the tennis court net is being used to separate the two courts.

The portable net I use and recommend is the Picklenet System because it's easy to carry and one person can set it up in about 10 minutes. 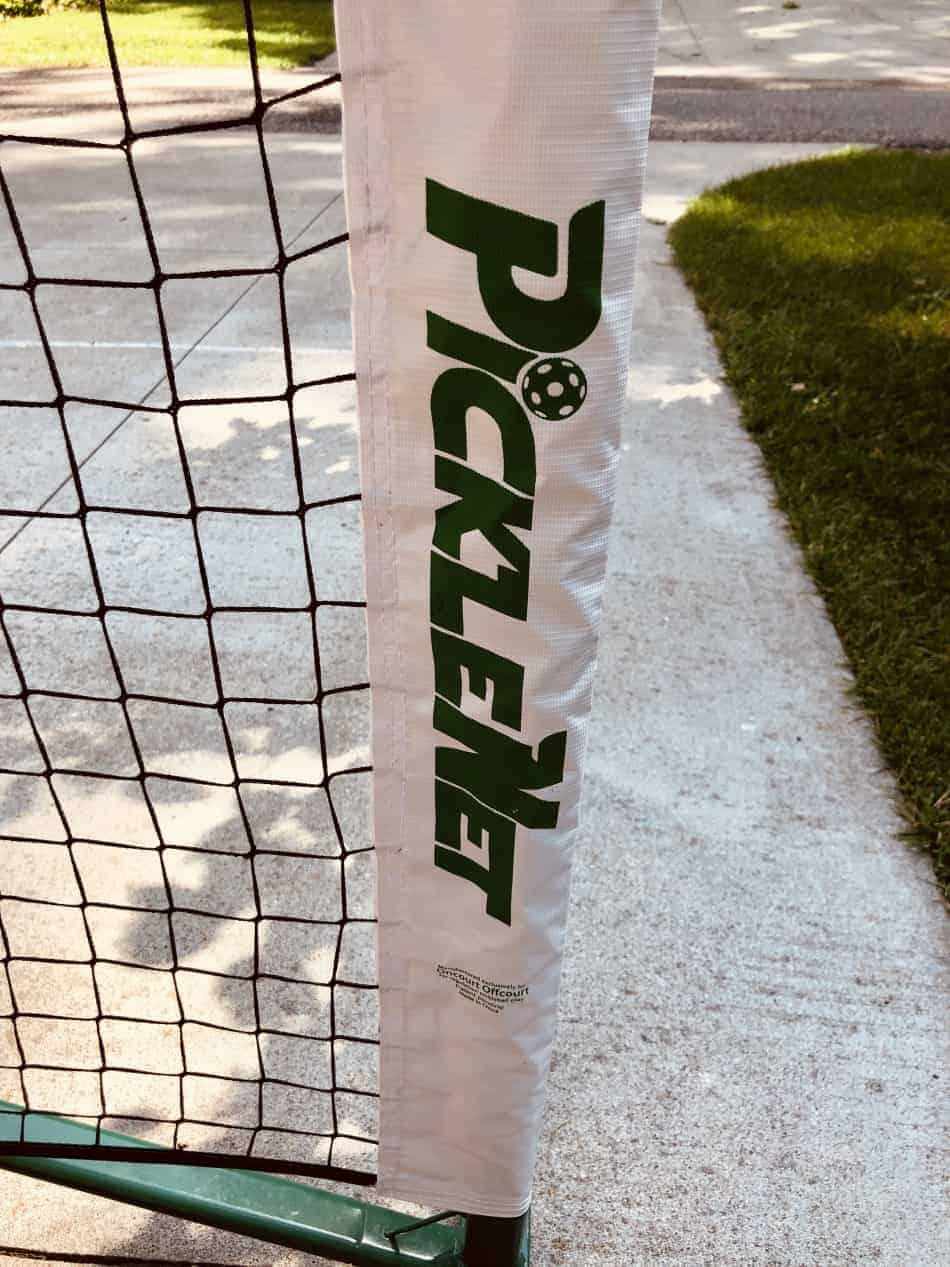 The Portable PickleNet system is what I use for all my driveway pickleball with family and friends.

This allows eight feet of space between each of the pickleball courts and the baseline. 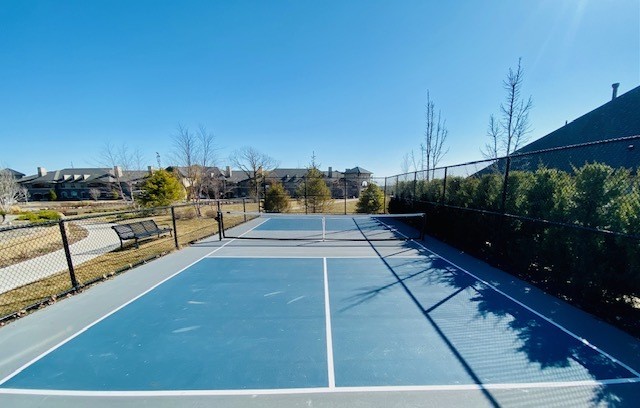 Once you've chosen your materials and your location for your temporary pickleball court, it's time to put it together. Follow these steps to make sure you're putting together your court in the best way possible: 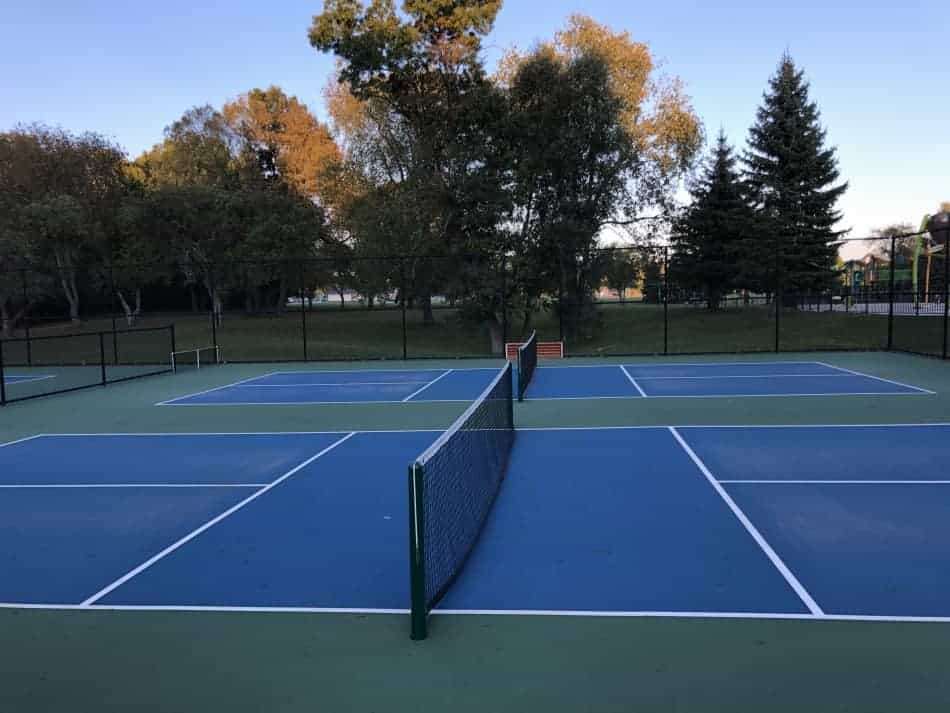 Temporary pickleball courts can be made on tennis courts, on pavement, or on any other level surface. Creating lines to form the boundaries of the court is relatively simple, and can be done with chalk, tape, or vinyl strips in a pre-made kit.

The right method for you depends on the surface you're working with and how long you want them to last.

Either way, the point is this.  If you’re in love with pickleball and want to bring the game to other people but don’t have a dedicated court - you can still create a pickleball court using my guide that I laid out for you here.

If you’ve got enough room and a hard flat surface, you most likely have a pickleball court waiting to be made.  Happy pickleballing!