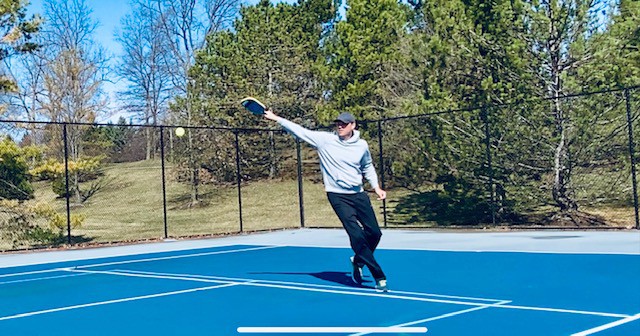 The most difficult shot to pull off consistently in pickleball is - the third shot drop.  It's the foundation to extending the point, evening the playing field with the return team, and giving yourself a chance to win!  The goal to the third shot drop is simple: after your opponent has returned your serve, you want to hit a soft drop shot into the no volley zone so you can get to the net.

The goal is simple, but the execution is extremely difficult.  I've been playing pickleball for nearly five years and it's still a challenge for me to execute consistently.  It's such a difficult shot because usually, the return of serve is coming back at you at a high rate of speed, and is usually deep enough to keep you at the baseline.

So, taking speed off the ball, hitting the sweet spot on your paddle, and landing a soft drop shot that arcs on your side of the court and falls flat on their side is NOT easy!  I equate the third shot drop to trying to dink; from the service line.

Related: Ever wonder which type of pickleball paddle leads to the most miss-hits?  Click here to find out!

The technique behind the third shot drop is advanced, so that's why I solicited the help of a dedicated pickleball coach who's partnered with some of the top pros to help teach bangers like you and me, how to actually perform a consistent third shot drop - game in and game out.

So, I partnered with Duke at QuicklePickle.com.  Duke and 5.0 Pro Daniel Moore created a video based training course specifically designed to help people improve their third shot drop.

You can check out his course here.  It's great because as a video course, you get to see the techniques demonstrated for you before you learn it.  It's a "see it, learn it, do it" learning style approach.  Plus, all of Duke's video are backed by a one year guarantee!

In the video training course you'll get a couple different chapters that get into more detail on:

Duke's course is getting rave reviews and he was kind enough to share some of his insight, and give us some tips.  Let's begin!

Let's talk strategy for a minute.  Good players always play the percentages, which means they hit a shot that is under control, and will keep them in the point.  The third shot may be a drive, a lob, or a soft drop shot that usually lands in the kitchen. It is a “goldilocks shot” as in not too hard, and not too soft. It keeps you alive in the point, which is the main purpose of the third shot.

Remember, the objective in pickleball is to Get To The Net!  It is relatively easy for the returning team to get to the net, because their shot must bounce, and one player is already at the net.

The serving team must serve, let the return bounce, then hit the critical “Third Shot” and hopefully get to the net.  Every shot “arcs” through a window in which the top of the net is the bottom ledge (of the window) and the upper point of the arc is the top of the window.  Unforced errors are usually hit too hard and too flat...through a small window, with little room for error.

Think about this until you can dominate at the net.  Essentially, the high point of a good third shot drop should be on your side of the net, so by the time it gets over the net, it's coming back down.  It should never still be on its way up when coming over the net to your opponent.  If it is, get ready for the ball to be blasted back at you!  This skill is not easy, and takes lots of practice!

When I asked Duke from QuickPickle.com about his thoughts on the third shot drop in pickleball he made me realize something.  He said it's not always the "third" shot.  Based on how the point goes, sometimes it's the 5th or even 7th shot that becomes the "drop shot".

He's right.  Really good players can take a return of serve and make it a drop shot.  But a typical point with recreational players or beginners may not present a good "drop shot" opportunity until later in the point.

The key is to recognize a good drop shot opportunity and capitalize on it! Maybe it's the third, fifth, seventh or even ninth shot of the rally - either way, be ready, stay patient, keep the ball in play and pounce when presented with the opportunity!

How To Hit A Good Third Shot Drop

I asked our third shot drop video training champ Duke to break down (in a simplified way) how he and 5.0 player Daniel Moore teach the basic mechanics of the third shot drop in their course.  Here is what he said...

Break it down into five simple steps:

Those are five simple technique tips to getting your drop shot off to a good start. They're simple but take practice to execute each and every time.  When you break it down to the fundamentals, you CAN do this!

The Four Phases to Winning a Point in Pickleball

Good players know that most points go through four phases:

Never ever miss a serve or a return of serve.  Never.  It's that simple.  If you lose one of those parts of the point, the match never get's off the ground and you're stuck rotating from one loosing round to another.

The serving team is playing catch up so to speak and must get to the net and keep the point alive.  How you hit this shot, will essentially dictate where the point goes from here.  You either even the playing field or are stuck playing from behind.  That's why the third shot is so important.  A well placed third shot drop allows you to get into phase 3 and phase 4.

The Dink Game begins when the serving team lands a good third shot drop. This effectively initiates a game of patience and finesse.  Four players at the net (if you're playing doubles), all trying to dink the opponent out of position.  Let the fast and furious begin!

The final phase to a point in pickleball is the "Fast Game."  This is where the action at the net is at a frantic pace.  All four players (if playing doubles) are dinking and dunking with soft (or hard) shots hanging low over the net, and landing in the kitchen.  It all comes to a crashing halt when one player hits the ball a little too high, effectively ending the round of low finesse shots and basically invites the opposing team to tee up on the ball - ending the point.

That's why the third shot is so important. A well placed third shot drop allows you to get into phase 3 and phase 4.

Why Your Pickleball Third Shot Strategy Is So Crucial

Most points in pickleball are lost - as in the ball is hit out of bounds, or dies in the net etc.  Basically, what we're saying is "mistakes" are the main reason why a point is made.

Rarely do we see an offensive shot so unstoppable that it's earning points left and right.  That's for the movies.  This is pickleball.  A game where the fate of each point generally lies in the strategy used during the third shot.

That's why it's so important to hit the third shot well, keep it in play, don't screw up and set yourself up for the "dink" game.

Keep it in play, be consistent, and let your opponent make the mistake.  The best players use this strategy, stay steady, and they win a lot of points.

Newer players tend to make mistakes.  4.0 and 5.0 players consistently do the following after their third shot:

Pickleball Third Shot Strategy can take many forms.  However, we've put together a simple list of what to incorporate and practice when looking to improve your third shot and win more points:

Editor's Note:  The last two check marks are in bold for a reason.  The arc of your shot plays a huge role in whether or not your drop shot is going to have optimal effectiveness.

Breaking Down the Third Shot Drop

The third shot drop can be a lethal shot - if you can pull it off properly. It's an advanced shot that take hours and hours of practice.  In its most basic form, the third shot drop is a "soft" shot that is intended to land in the kitchen and ideally, stay there.

Spin is not necessary for the third shot drop to be effective. However, it must have proper arc.  When done correctly, the apex of your shot's arc must be on YOUR SIDE OF THE NET!

This means, when the ball is traveling over the net, it is on its way down from its high to low position.  This is crucial.

Here's why - if the ball is hit too high or too hard and the apex of the arc is on your opponent's side, they'll tee off on you. You basically lobbed them a softball and are asking for it to be smashed back at you.

This is why the game of pickleball for advanced players becomes more of a game of finesse versus a game of power.  It becomes a chess match of who can out-finesse who.

Keep that drop shot low, so it creeps over the net and dies!  Your opponent's chances of smashing it back at you will die with it!

The next time you're out on the court, keep track of your unforced errors.  Once you begin to recognize them and reduce them, you'll probably find yourself making fewer of them!

Thanks for reading our post on pickleball third shot drop and what it takes to execute at the net.  We hope this article has helped you in some way shape or form.

Let us know what your thoughts are in the comments section below.  We'd love to hear about how your latest round went.  What went well?  What did you struggle with?

For more tips and strategies, check out our 25 Pickleball Strategies for Beginners.

Check out more of strategy related articles here on our Strategy Page.

For more resources for mastering the third short drop, check these sites out these sites: