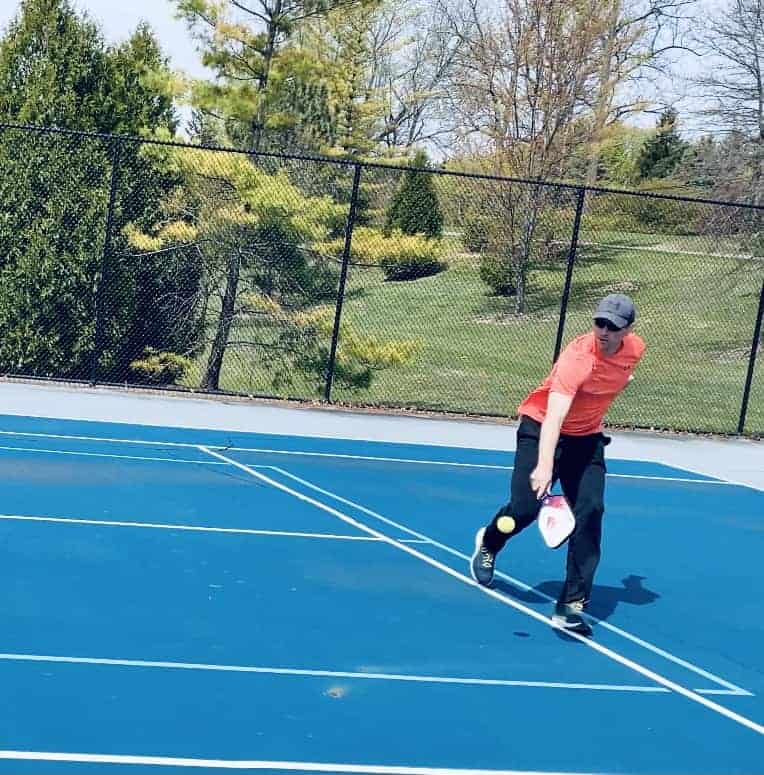 What Is A Drop Shot In Pickleball? A Helpful Beginner’s Guide

Pickleball features various unique shots and techniques, but few are as paramount as the drop shot. This move is known for being tough to learn but strategically vital when the level of play is elevated. So, what is a drop shot, and why is it so crucial in pickleball?

Drop shots are precise, gentle shots meant to bounce into your opponent’s no-volley zone. They allow your team to advance to the net while equalizing your opponent’s positional advantage. Also known as the third shot drop, this shot is arguably one of pickleball’s most advanced techniques.

This article will describe what drop shots are, why they’re so crucial in pickleball strategy, and how to execute this shot along with drills to perfect it.

In short, the drop shot in pickleball has the ability to take a beginner or 3.0 level player and turn them into a tournament ready 4.0 player.

Yes, it’s that important.  Let’s get into it.

The Drop Shot In Pickleball

The drop shot is a crucial skill in any pickleball player’s arsenal. Though generally utilized from the baseline as the third shot of a rally, it can help players gain time to cover ground and get to the kitchen line.

But drop shots are also common at the net to take pace off a hard hit ball and initiate a softer dink rally.

No matter where you are on the court, if you can take the pace off of a fast ball hit at you and drop it in the non-volley zone; you’re executing one of the most lethal shots in the game of pickleball.

The ultimate goal of any drop shot in pickleball should be to either force an error by your opponent or set yourself up for an attackable ball to capitalize on.

What Is The Purpose Of A Drop Shot?

Drops shots target your opponent’s non-volley zone, often referred to as the NVZ or “kitchen.” By doing so, you are accomplishing two key things that give you a competitive edge: net control and setting up the return shot to your advantage.

Related: For the story behind why it's called the Kitchen, click here.

You typically want to play at this position on the court since it gives you the best chance to score.  Pickleball is won and lost at the net, so getting there is crucial.  And no other shot allows the serving team time to get to the net like a well placed drop shot. 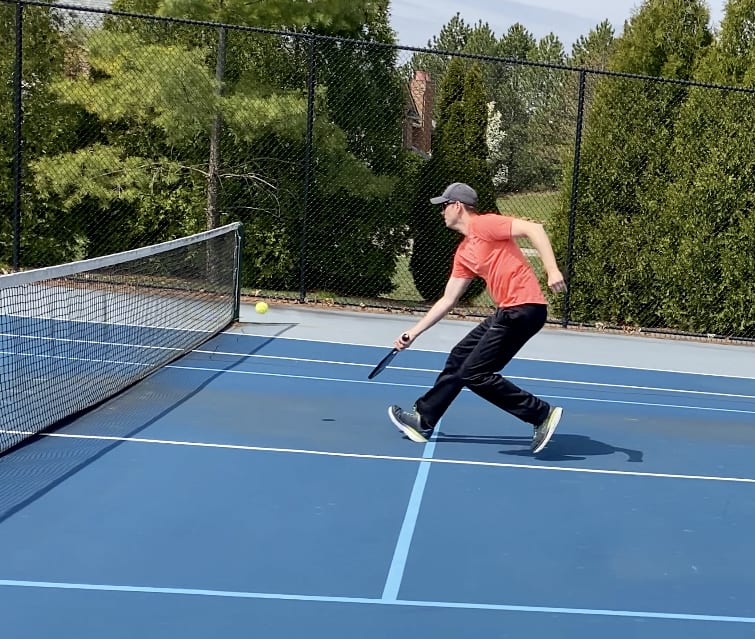 Secondly, a well-placed drop shot ensures the opponent’s return shot is a prime opportunity for you. The lack of power behind a drop shot means it shouldn’t bounce high. So, the low height forces your opponent to typically return the ball with an upward swing close to the net.

These upward-shot balls generally travel slower, higher, and towards you at the non-volley line. As a result, they present ripe opportunities for you to score with a solid downward return hit.

This is called an "attackable ball".  And Drop shots can set them up.

In short, a well placed and well timed drop shot in pickleball will force your opponent to have to hit up on the ball and allow you more opportunity to hit down on your next shot and put it away with authority.

Pros use the drop shot to set themselves up and put points away with an overhead smash or baseline passing shot.  But, it takes patience and precision to set up.

You can think of the drop shot as a sort of pickleball equalizer. You can use it to neutralize your opponent’s advantage of already being at the net while giving you and your teammate time to strategically position.

When To Do A Drop Shot In Pickleball

The best time for a drop shot is when you and your partner are positioned near the baseline because it allows you to move forward to the net.

This is most commonly done during the third shot of a point after the serve and then return of serve.  Hence the name “third shot drop” - a term so often used in pickleball.

More specifically, serving teams typically utilize drop shots on the third shot of a rally to compensate for the positional disadvantage that their team has.

Remember, unlike tennis the return team has the advantage because they can get to the net faster.

In the end, just because drop shots are advanced shots, it does not mean they are always optimal. The move can yield a high reward but is also high-risk due to the precision required.

Helpful Info:  If you're a beginner, check out my friendly guide on tips for beginners. If you're more of a seasoned player, I recommend glancing at my tips for intermediate players.

Let’s flush out what the third shot drop is and why it is such an important technique used in pickleball for both recreational games or tournament level play.

The third shot drop earned it’s nickname due to the technique commonly occurring on the third shot of a rally.  You could spend a lot of time digging into pickleball strategy as a whole, but I’m going to keep it as simple as possible.

Related: Think the third shot drop moniker is unique?  Wait till you read how pickleball really got it's name.

In a game of pickleball with four players, the serving team will generally have both players back near the baseline to start.

Conversely, the return team will typically have one player back but also one near the kitchen. Because the defending team has a player forward near the net from then start, they begin with a positional advantage.

The server hits the ball to the person diagonal to them (the receiving player in the back). The receiving team then returns the serve. At this point, the serving team will normally still be at their baseline and the opposing team moving forward.

It may not sound like much but that gives the return team an advantage.

Using the drop shot for the third shot in the above example means the serving team drops a low, soft shot into the kitchen, allowing them to gain ground towards the net and hopefully get a high, attackable ball to feed off of.

When executed properly, this shot and the follow-up shot, effectively eliminates the positional advantage the defending team has.

The third shot drop is the great equalizer and evens the playing field. 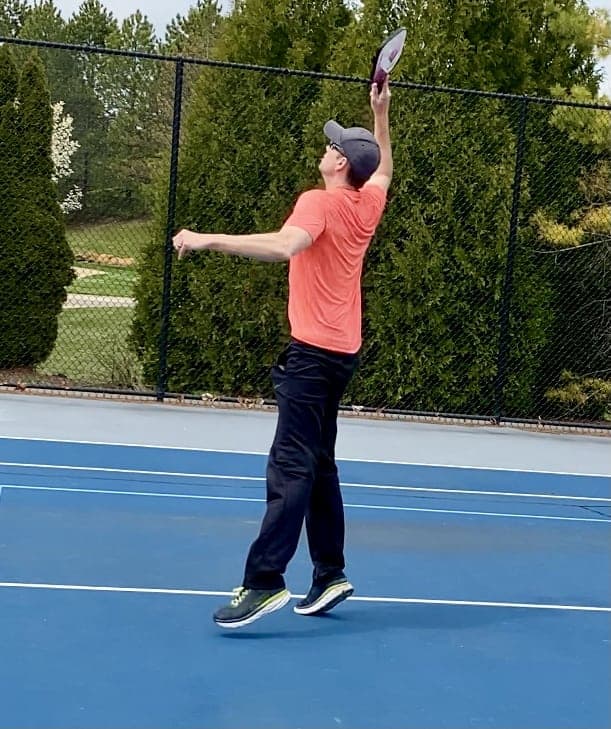 How To Do A Drop Shot In Pickleball

At this point, you’re probably eager to learn how to do a shop shot in pickleball and know how to perfect it using some easy drills.  I've got you covered.

Here are the basic steps you’ll need to learn in order to perform a lethal drop shot in pickleball.

Below are 7 tips for beginners on how to properly perform a consistent drop shot:

It’s worth reinforcing again that your drop shot should hit its apex (the highest point while traveling through the air) over your side of the court. If not, you might be aiming too far or hitting too hard.

In terms of trajectory height, find something in between too low (net height) and too high (like a rainbow).  Typically the higher the arc, the more deep your drop shot will land.

Too deep and it’ll be easy for your opponents to volley it right out of the air.  Too shallow and you run the risk of hitting the net.  It’s a Goldilocks approach.  Aim for something in between, that lands in the middle of the kitchen.

Are you more of a visual learner? If so, you’re in luck.  There are dozens of video guides online detailing how to accomplish this maneuver.

These video tutorials on YouTube are a great place to star:

Drop shots are among pickleball’s most difficult shots. So, don’t be discouraged if you can’t pull it off right away!  Most people need ample practice to learn the move and even more time on the court to use it competently while playing.

You can try a few different methods to nail this move down, and newcomers should take an incremental learning approach.

Practicing Drop Shots With A Partner

If you’re lucky enough to have a friend willing to help, they’ll make drilling this technique feel much more natural.

Assuming you have a court and net available, the drill is pretty simple. Start with both players standing on opposite sides of the net near or at the kitchen.

From here, your partner can send direct shots for you to return into their no-volley zone area. Stay loose and low while practicing upward contact, and take note of how the ball travels so you can adjust appropriately.

As you get more comfortable, take a step backwards.  As you get into a rhythm, take more steps backwards until you’re landing drop shots from the baseline.

Your partner can also change angles and depth to give you more of a challenge.

Do this and switch up where your partner is hitting from so you can work in some cross court drop shots and backhanded ones too.

The more variability you mix into this drill the better, because it will mimic real world play during a game.

You can still practice a drop shot even without a pickleball partner.

One way to do this on your own is to drop pickleballs in front of you and practice hitting them squarely into the kitchen from anywhere on the court.

This doesn’t accurately mimic a return of serve shot for you to hit off of, but it will allow you to work on your upward dinking motion from far away and improve your aim into the kitchen.

You could also set up targets to hit in the kitchen to improve your shot accuracy even further.  Cones like these are really simple and easy to use if you're dong some solo practice.

What Is A Drop Shot In Pickleball - Conclusion

Pickleball takes minutes to learn and a lifetime to master. Few sports manage to balance such broad accessibility with a massive skill ceiling the way pickleball does.

Of all the shots to master in pickleball, the drop shot is the most important but also the most difficult.  While challenging, it can be achieved by a beginner and used recreationally if you know the right technique and drills to work on.

The three main goals of the drop shot in pickleball are to get your team to the net, force an error by your opponent or set yourself up to hit an attackable ball.

And the only way to master the drop shot, is to drill, drill, drill and then drill some more.

Despite its more advanced technical demands in shot mechanics, the drop shot can be achieved by any skill level player but depending on your experience it just might take more time.

So, be patient and have fun!  I hope this was helpful!