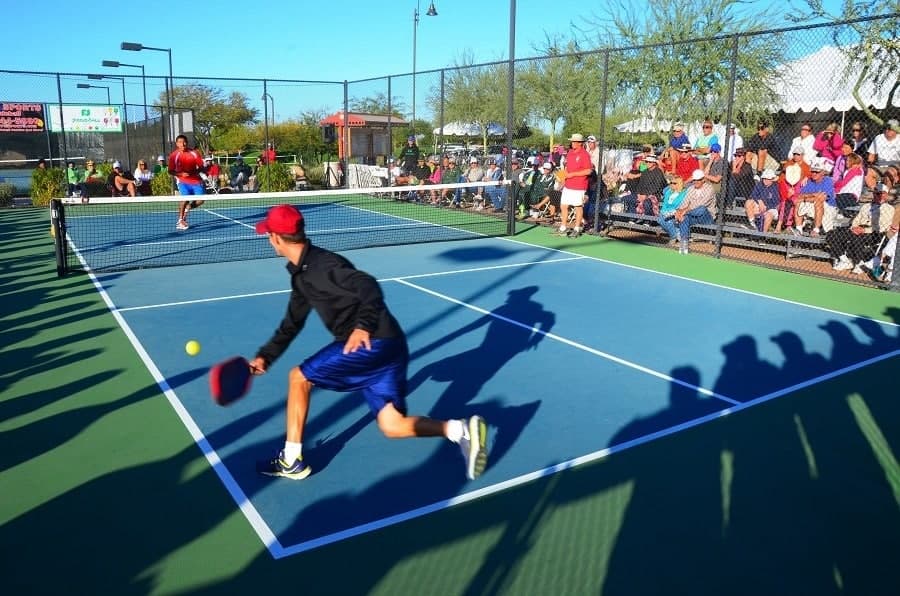 Before we get into pickleball strategy around the return, let’s review what the USAPA has to say about the return of serve HERE. Related: Some paddles are good at hitting deep shots, some are not.  I interviewed the owner of a huge paddle company and learned some fact about paddles I'd never known before!  You have to read this!

If you’re combing the internet for tips on pickleball strategy, you’ll see this one a lot. Hitting the ball deep is so important that you’ll see it mentioned over and over again. For the return, it is vitally important because it gives you the precious time you need to get to the net. Chances are, the server put their serve deep and near the baseline so your goal, as the returner, is to do the same. The benefit to hitting the return deep is that if done correctly, it gives you the time and momentum to start heading towards the net. The idea is to push your opponent after his or her serve as far back as possible. Remember, it’s a race to the net!  One surefire way to win that race is to pin your opponent back near their baseline with deep return shots.

Most points are won or lost at the net so getting to the net as fast as possible is critical. Being served to gives you the upper hand in getting to the net quicker. Arriving at the net before your opponent is important in doubles play but is even more important when playing singles.  In the video below from Mark at 3rd Shot Sports, he gives us great examples of pickleball pros and how they move to the net quickly and with winning intentions.  They don't saunter up to the net, they arrive and arrive with authority!

Related: Did you know QuickPickle offers a course geared entirely towards improving your play at the net?  Trust me, anyone can dink like pro, learn more here.

Another way to improve your return of serve is to hit the ball in the center of the court. Returning the ball deep and in the middle (center) of the court is even better. During doubles play, this can be an especially useful strategy. When playing doubles, if both of your opponents are pinned down deep towards the baseline and the ball is hit dead center between them, you've created a “who's ball is it?” scenario which can lead to confusion. If your opponents are relatively new to playing with each other and haven't established common communication, this strategy can work early on. Let's face it, most pickleball players would prefer to hit the ball with their strongest swing. That is typically the forehand swing. Hitting an accurate shot with a powerful backhand, is more difficult. So, when returning the serve, target that weakness. Aim the ball towards your opponent’s backhand and force them to hit the difficult shot. This is vitally important during singles play where the emphasis is creating difficult shots for your opponent to hit. Staying patient and setting yourself up with simple returns while forcing your opponent into more challenging shots is a great strategy. Getting in position is crucial because you want to make sure you’re set up to return the serve using your strong hand with your most accurate and effective shot - most likely a forehand. Position yourself between the centerline and the service area corner so that no matter what type of serve comes your way, you can pivot and return it with your forehand. Don't set yourself up so that your opponent can easily force a backhand return from you. The more you can dictate the shot selection, the more points you’re going to win.

As we've said, your best shot is usually a strong forehand. So, put that to good use. After you've set yourself up to return every serve with your forehand, begin by placing some spin action on the ball during your forehand return. The topspin return begins with your paddle low and ends with the blade high above your opposite shoulder. It's a low to high movement with a subtle flick of the wrist to add spin. When topspin is applied to a deep return, the ball will jump towards your opponent upon hitting the court and push them back even further. The backspin return is another way to catch your opponent off guard. This is done by starting with the paddle face high and cutting down at the ball. This is a high to low swing (opposite of topspin) that creates backspin. When you “cut down” on the ball, the ball will bounce back towards the net, away from the oncoming opponent. When done correctly, this shot puts the two bounce rule in your favor. Ideally the opponent will wait, let the ball bounce and watch in amazement as the ball travels “back” away from them and towards the net. Newer or novice players will have a very difficult time defending this shot.

For the most complete list of paddles that offer the best spin for players, check out our Best Pickleball Paddles for Spin Guide! This one is for a more advanced player. If you’re a seasoned veteran who enjoys putting english on the ball, we invite you to try this one. Sometimes, the server may remain back by the baseline because he or she is expecting you to try to pin them deep, this opens up the entire front of the court. By staying back, your opponent has effectively opened themselves up to a well placed dink shot to an entirely open kitchen.  Placing a dink shot with heavy backspin can be a nightmare for the other player - especially if they’re waiting by the baseline. If they’re not set up to return a soft dink by the net, then they're completely out of position. However, if you are a new player, we don't recommend this because hitting a short dink that early in the point is basically inviting your opponent to the net. This takes the advantage of getting to the net quicker away from you (the returner) and gives it to your opponent (the server). We also don't recommend this strategy if the serve you're returning is blasted hard and deep at you. If the serve is soft and ripe for the picking, give the dink return a try.

Finally, it all comes down to momentum. If you’re setting yourself up properly with consistent forehand returns, ideally with topspin, use the forward momentum you're getting from the forehand return to help propel yourself to the net in one fluid motion. That momentum generated from your swing can be beneficial to you. Use it. Get to the net quicker, and put the ball away.

In closing, the safest and most effective return of serve is one that is deep and in the center of the court.  This is an essential pickleball strategy.  Try to put as much distance between your opponent and the net. If you can do that consistently, you’re going to win a lot of points. The more you win, the more fun the game is.

Let us know what you think of these pickleball strategies. If you’d like help or tips with your game, send us an email, we’d love to help!

What Are The 3 Rules of A Pickleball Serve?