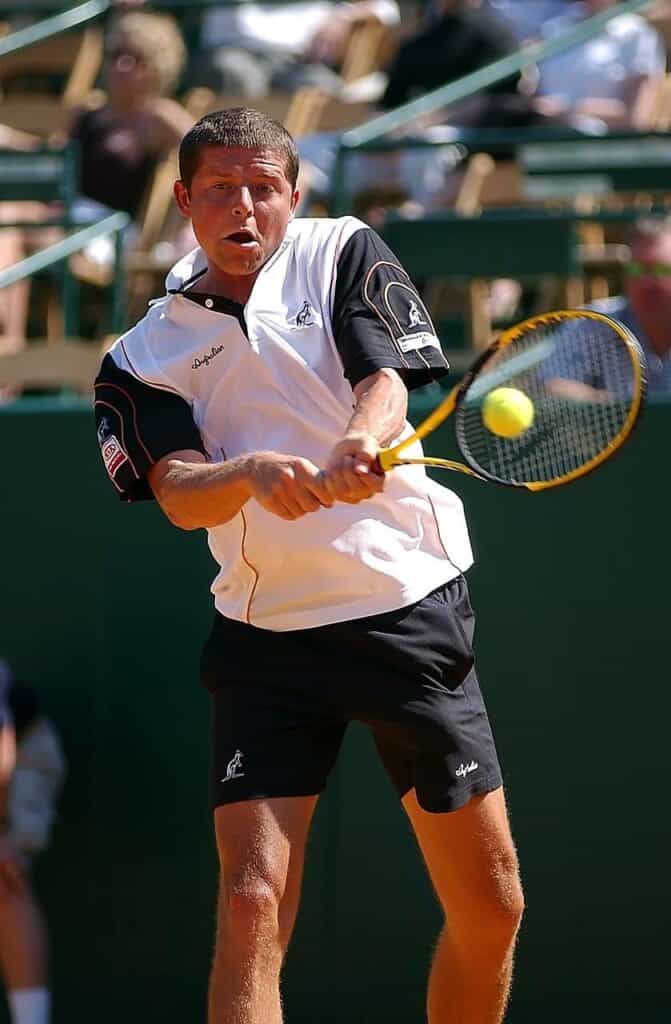 Can You Hit The Ball Before It Bounces In Tennis?

So you’ve got a tennis racquet, some balls, a practice partner, and you’re ready to play and learn the game of tennis. However, before hitting the courts, it’s beneficial to get to know the rules and master the basics. One of the first questions you may have is can you hit the ball before it bounces in tennis?

Yes, you can hit the ball before it bounces in tennis. This type of shot is called a volley and is generally hit when moving forward towards the net. The one exception to this rule is when you return the serve, the serve must bounce once before it is hit.

In this article I’m going to analyze when to let the ball bounce during a game of tennis and when not to.  I’ll explain why hitting it out of the air is called a volley and the different forms this shot may take based on the situation.

Yes, there are many types of volleys.  Each with their own technique and purpose.

With the coaching assistance of a few tennis pros, I’ll explain how and when to let the ball bounce in tennis and when to lot let it bounce and hit a volley.

What Is It Called When You Hit The Ball Before It Bounces In Tennis?

The technical term for hitting a ball before it bounces in tennis is called a volley and it comes from the French word for “flight”.  Volleys are a great shot when advancing to the net and require very little arm swing.  Instead, the shot is more of a block or rebound.

Keep reading for more on the types of volleys that are commonly used.

Click here for more about the the term’s rich history and where it actually came from in tennis.

When Does The Ball Have To Bounce In Tennis?

The only time the ball must bounce in tennis is during the serve.  After the serve has crossed over the net, landed in the proper service box and is returned back over the net, then and only then can the ball be hit out of the air or volleyed.

Other racquet or paddle sports have rules where the ball must bounce a second time before a volley is allowed but tennis has always been a “one bounce” racquet sport and it will stay that way.

Why does the serve have to bounce in tennis?  The ball must be allowed to bounce during a serve in tennis so that each player is forced to perform a baseline shot. 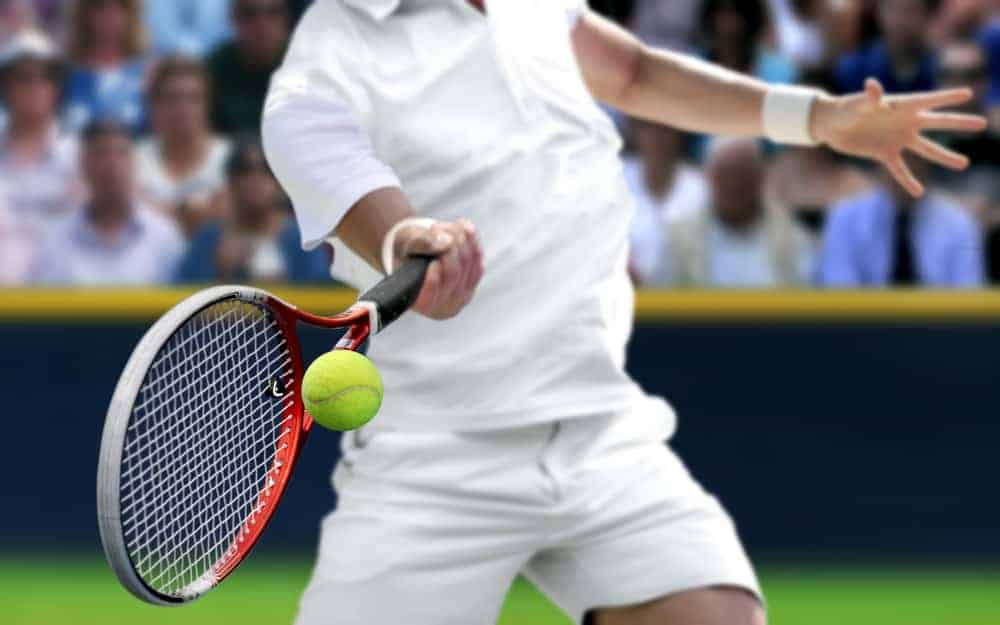 When To Hit A Volley In Tennis

You will often hit a volley in tennis when you don’t have time for the ball to bounce or when your strategy is to advance to the net and play from that position.  You’ll see a lot of players use the volley while running or advancing to the net.

After volleying, players will often remain near the net to try to finish off the point from the there.

The two most common situations where a volley is a very effective shot are:

When Not To Hit A Volley In Tennis?

Well, the first and most obvious place during a point in tennis to not hit a volley is during the serve because it simple isn’t allowed.  But, are there times when you are allowed to hit a volley but shouldn’t based on the circumstance?

Most tennis coaches will tell you that if you’re moving backwards or sideways, then don’t hit a volley.  This makes the volley a much tougher shot to execute.

In those instances, it is better to allow the ball to bounce, get your feet set so you’re in a better position to hit a better shot.  That’s why footwork is so important in tennis.

Remember, volleys are best when you’re charging the net and can hit the ball out in front of you.  But again, this has to do with footwork and being in position to hit the shot!

Pro Tip:  One of the most fundamental strategies in tennis is that you’ll hit better shots when you’re in position to hit the ball out in front of you.  If you’re not in a good position to swing and follow through, then you’re most likely not going to hit a quality shot. 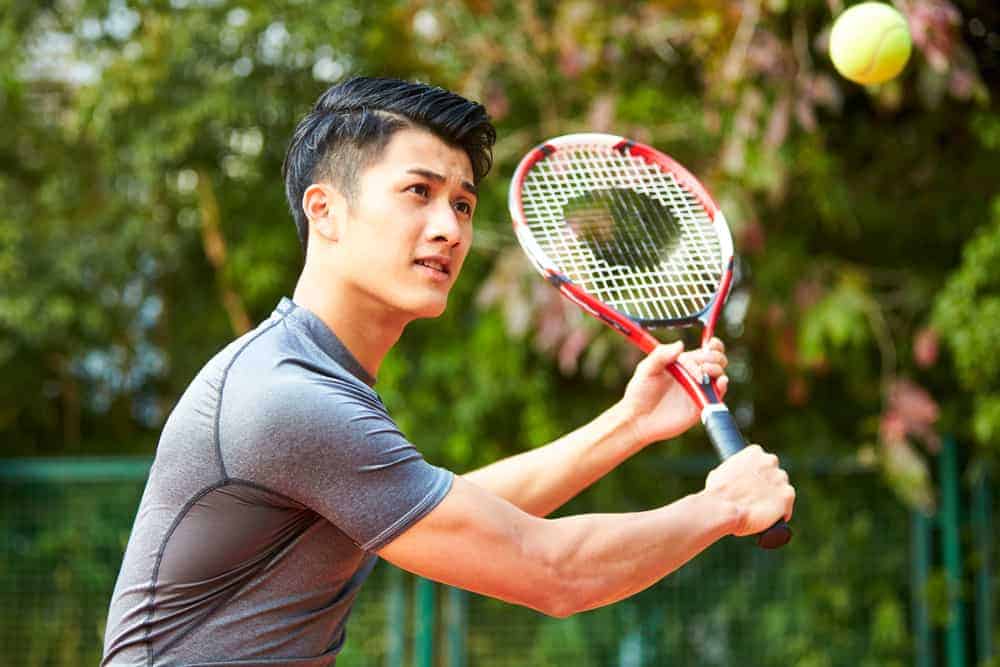 When Is A Volley Not Allowed In Tennis?

Like I mentioned above, the return of serve is the only time that a volley is not allowed in a game of tennis. This is the one instance where hitting the ball before it bounces is not legal. Before the receiving player can return a serve, the ball must bounce once in the receiver’s service box.

If the returning player does not allow the serve to bounce, it is a fault on them.  However, if the serve does bounce but does not land in bounds, it is a let.  And the server gets his or her second serve.

Click the link for more on how many serves you actually get in tennis, it might actually surprise you.

Understanding A Volley In Tennis

In tennis, the word volley originates from the French word for flight and means “a return of the ball before it hits the ground.” A volley is a shot that you hit before the ball bounces on your side of the court.

As I’ve mentioned already, you will typically use a volley the most when approaching the net aggressively.

Although the first few effective tennis shots you will probably learn as a beginner are the forehand, the backhand, and the serve, developing the skill of hitting a volley is an essential step towards learning the next phase of the game.

Once you become proficient in hitting this shot, it can be a formidable weapon to end a point against your opponent quickly.

A volley is different from most other shots because you don’t use a full swing to hit it. Instead, you usually execute the volley with a short, choppy, punching motion with the racquet.

It is essential to have proper technique with the volley and to not over swing.  I’ve heard coaches describe it as more of “block” where you quickly rebound the ball.

Remember, it’s not a swing.  It’s all angles and racquet face positioning.

Fun Fact:  The volley is used extensively by doubles players; however, many singles players utilize this shot to go on the offensive and achieve a put-away.

There are several different variations on the volley shot in tennis, and I have included a brief description of each below:

Related:  Did you know there is a type of volley that actually does bounce?  And it’s a lethal shot when done correctly.

Tips For How To Hit A Volley

To master the volley shot, begin by using a continental grip, where you are essentially “shaking hands” with the racquet.

Tip #1 - The most important tip for hitting a volley properly is to keep your hitting elbow tucked in tight to your body.

Coaches will say to pretend as if your elbow is attached to your hip bone.

So if you’re right handed, keep your right elbow tucked in close to your right hip.

This is important because it keeps your arm from swinging back too far and allows for your racquet to be in the optimal position to block or rebound the ball back over the net.

It won’t matter if you’re hitting a forehand volley or a backhand volley, your hitting elbow should always be tucked in towards your body.

Remember, the volley is best utilized as a rebound shot.  So, use the momentum and force of the shot hit at you to provide the power you need for your volley. The more open and square your racquet face is, the more power you'll generate from this rebound effect.

3 Tips To Improve Your Volley

Here are simple tips designed for beginners on how to improve your volley:

You can also check out this video which contains helpful tips on the volley shot:

Once you have learned the basics of the volley and want to perfect your skills, you can also review these tips from USTA.

Now that you know that you can hit the ball before it bounces in tennis, and how to do it, you are all ready to take to the courts and give it a try..

With your new volleying skills, you’ll be playing the net like a pro before you know it!