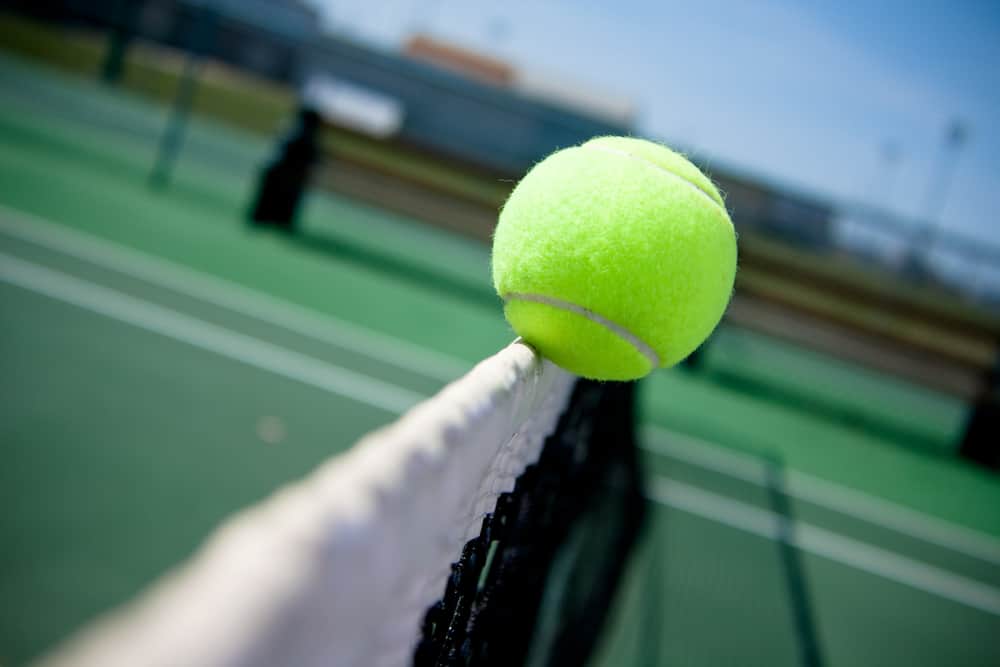 The net in tennis marks where your side of the court ends and your opponent’s side begins. However, different rules apply when the ball hits the net. It depends on whether you’re serving or if the ball is already in play.  So that begs the question, can the ball hit the net in tennis?

In the rest of this article, I’ll delve into these different circumstances so you can easily learn the rules around the ball hitting the net in tennis.

I’ll explain what happens when the ball hits the net during service and regular play. You’ll also learn what you can do to prevent the ball from hitting the net when you’re playing tennis.

Let’s get started with hitting the net in tennis during a serve.

Hitting The Net In Tennis During A Serve 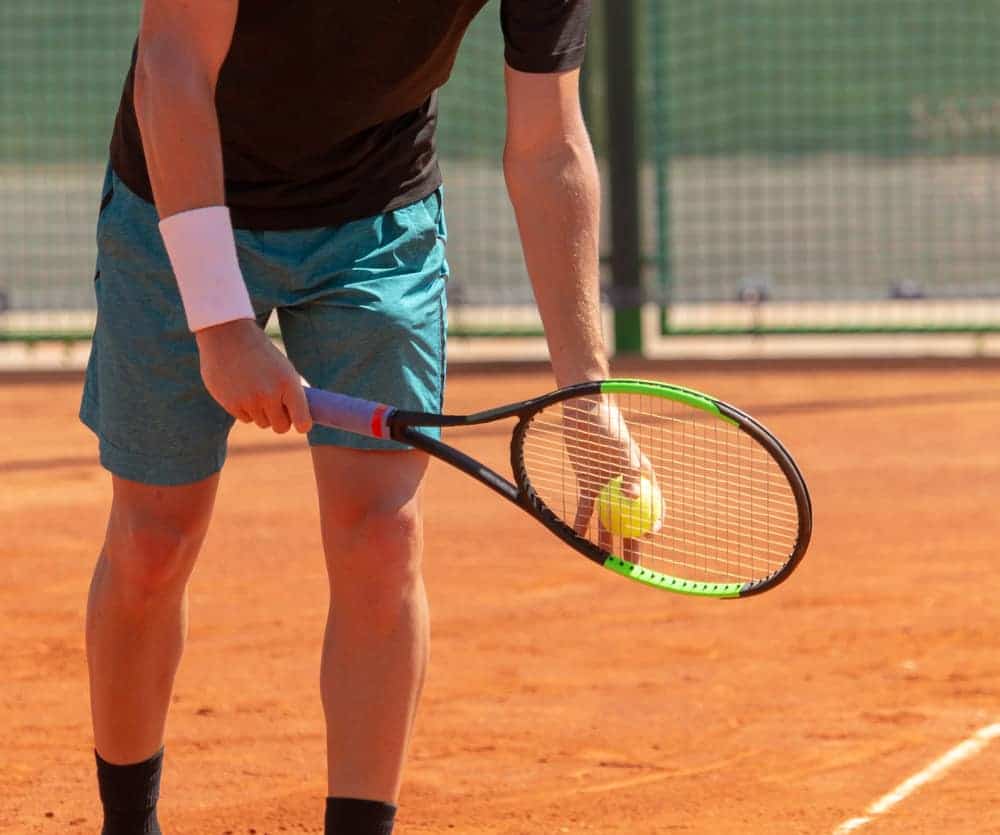 Your serve is such an important shot in tennis.  Points and matches are won at the service line so getting it right is crucial!

When serving, you want to have the mindset that your first serve is going to clear the net, land in, and be very difficult to return. However, if you hit the net during your serve, you still get another chance depending on where the ball lands.

Let’s take a look at what happens if you hit the net during your serve.

When you serve, you have an intended destination on your opponent’s side. Your serve must land in 1 of 2 boxes, depending on where you’re serving from.

Suppose it’s your turn to serve -- the ball hits the net and lands in the correct service box. This outcome is called a “let,” and this serve won’t count against you. You get to re-do this serve, where the ball is returned to you without penalty, allowing you to serve again and in a way replay the point.

From here you actually are still allowed two serves because the first one that hit the net and landed in is considered a let…not a fault.

Keep in mind, not every racquet or paddle sport has the “let” rule.  There has been talk of removing it in tennis but so far, the purity of the game has prevailed and it’s stuck.

Alternatively, if you hit the net on your serve but the ball doesn’t make it into the appropriate service box on your opponent’s side, this is called a “fault.” If only one fault has been called, you get just one additional attempt.

If there have been two faults called on your serve this is called a  “double fault”,  and in this case, you lose the point.

The easy way to remember is that if you fault twice on the serve the point is awarded to your opponent.

This is why you see pros go “all-out” and blast their first serve.  And if it lands out, their second serve is much more tame, always lands in, but is much easier to return.

Related:  See how the volley is making a comeback in tennis. 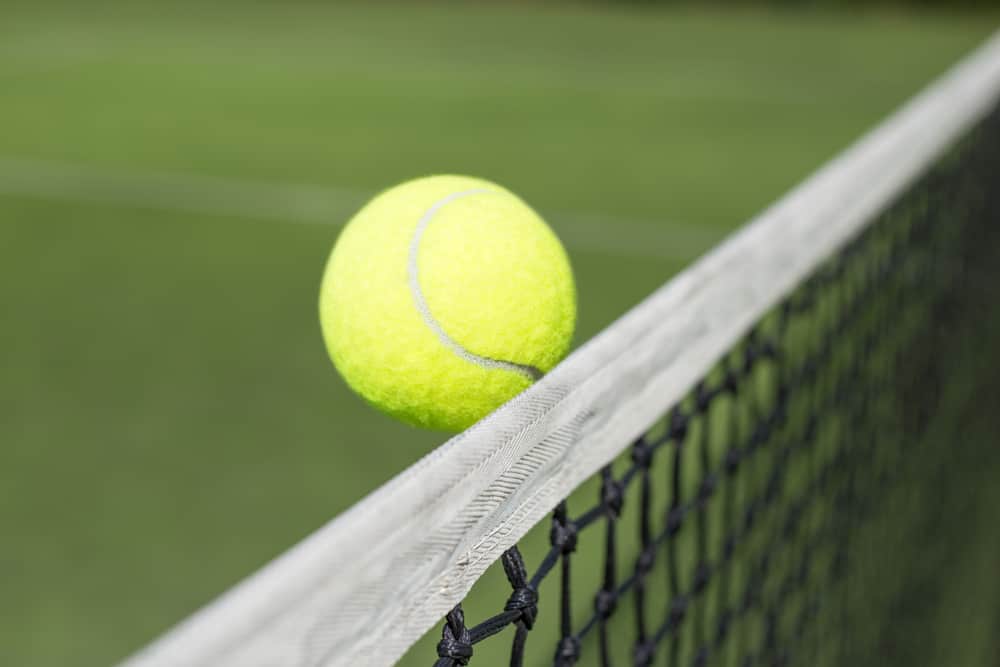 Hitting The Net During Rally Play

If you have a successful serve and the ball is now in play, you or your opponent could still hit the ball into the net. If the ball is hit directly into the net and doesn’t make it over to the other side, the point is over.

Whoever didn’t hit the ball into the net gets the point.

If the ball hits the top of the net but makes it to the other side and lands in, it’s still in play. It’s up to your opponent to return the ball, or they’ll lose the point.

Other Faults When Serving In Tennis

There are other ways to serve a fault in tennis in addition to hitting the net and not landing the ball in the correct box.

If you swing and miss when attempting to serve, this will count as a fault as well.

Additionally, if the ball makes it over the net cleanly but still lands in the wrong box, this is also considered a fault. The term can be applied to any failed serve attempt that results in an unstarted point.

How To Avoid Hitting The Net In Tennis

If you notice you’re hitting the net too often, you’ll want to reexamine the position of your hand as you swing.

Usually, when a player makes contact with the net, it’s because they swing in a straight line. Your hand might be level as it comes all the way through the shot.

When you’re swinging with this straight-line motion, you’re likely to send the ball right at the net. Instead, you’ll want to start with your hand slightly lower and raise it slightly through your swing.

By swinging in a slightly upward diagonal motion, you’ll give the ball the trajectory it needs to clear the net and remain in play.

If you watch the tennis pros play, you’ll notice their hands moving up at approximately a 45-degree angle when swinging. It’s the ideal slope to use when looking to hit a ball in tennis.

As you become more proficient in your swing, you can get your ball consistently clearing the net by 4 to 6 feet. This height and power will help the ball land deep in your opponent’s court, making it far more difficult for them to return..

To learn more about the ideal swing to use to avoid hitting the net, you can check out this informative YouTube video. 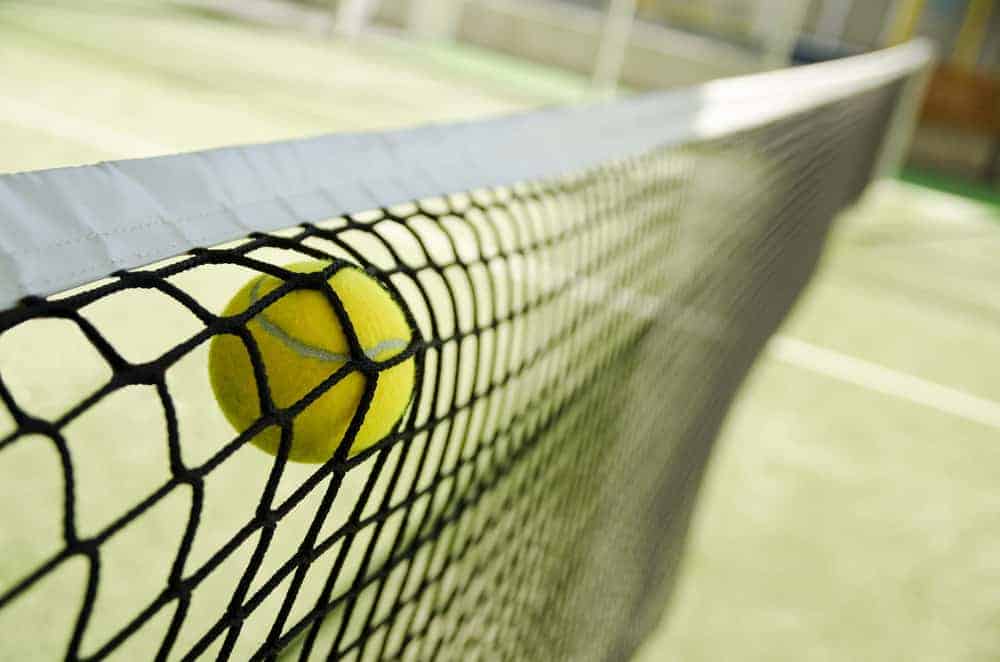 To help you improve your swing, let’s take a look at a practice routine you can try to improve your form and technique

Try this a few times, stopping your swing in these 3 different positions and taking note of alignment.

Make adjustments as needed, perhaps starting your hand a bit lower or correcting the angle of your racquet face in the second step is all that’s needed.

The more you check in with yourself at these three key points in your swing, the more you’ll get used to how your body feels when hitting with proper form.

As you continue to practice, begin to tie these 3 positions together to make it a more fluid swinging motion.

The more you practice, both part by part and in one fluid motion, the easier it will be to fix technique errors and swing with better form.  All resulting in fewer shots hitting the net.  You’ll be able to return to your ideal swing in no time. This muscle memory will come in handy as you leave the practice court and play more games.

Take that time to check in with your body and get your positioning better aligned. With this renewed sense of alignment, you’ll be better prepared to do your best when you hit the next ball.

Can The Ball Hit The Net In Tennis - Final Thoughts

A ball can and will hit the net in tennis.  But, there are different outcomes for when and how the ball hits the net.  If you’re serving and the ball hits the net, this could either be a fault or a let, depending on where the ball lands. A let won’t count against you but, a fault will.

Additionally, during a rally, a ball that hits the net, lands in and makes it to the other side needs to be returned and played..

These little nuances can take a little time to learn for a beginner.  My hope is that after reading this article, you have a better understanding of the rules behind the ball hitting the net and what happens depending on the circumstances.