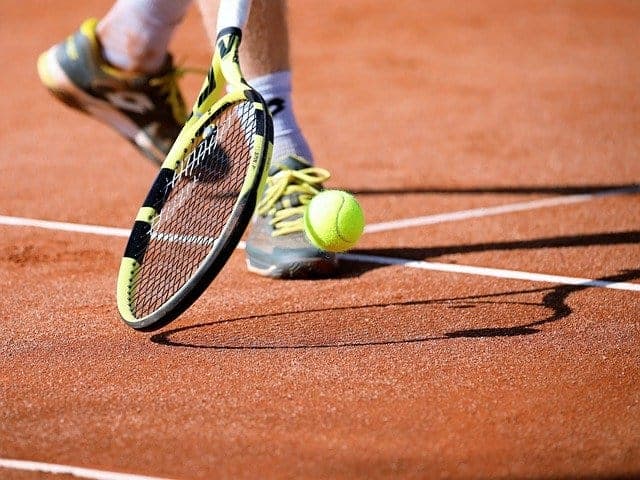 There are certain times when the lines of technique and strategy meet in the game of tennis to form a shot so fundamental to the game, it deserves it own unique name.  One such shot is the “half-volley”.  But what is a half volley in tennis?

A half volley in tennis is a stroke that involves a player immediately returning the ball after it has already bounced. Unlike standard volleys that are returned mid-air, half volleys require a player to lower and straighten the racquet, before abruptly hitting the ball within seconds of the bounce.

When a player cannot reach the ball before it bounces, however, it will need to be hit back with compact strokes to clear the net efficiently. Fortunately, certain techniques, such as the half volley, allow for quick returns at a shorter distance.

To learn more about the half volley, proper technique to make this shot effective, and when to use it during your training sessions or match play, read on.

What Does A Half Volley Mean In Tennis?

A half volley in tennis means that instead of hitting the ball directly out of the air, it was allowed to bounce but only for a fraction of a second before being hit back over the net.

The half volley is commonly used when a player can’t quite get to the ball before it bounces and instead times their arrival to the ball so that they can hit it right after the bounce.  When done properly, the effect is almost the same as hitting a volley (right out of the air).

Why Is It Called a Half Volley In Tennis

Why is it called a “half volley” when it is in fact a ground stroke?

It’s called a half volley because the shot falls uniquely in between a volley and a ground stroke despite the ball hitting the ground.  Even though the ball is allowed to hit the court, it isn’t allowed to come back up to its natural height and is instead hit as if no bounce occurred.

With the half volley, the ball comes off the racquet more like a common volley, and looks nothing like a traditional groundstroke.

Despite having a bounce, it is called a half volley because the effect is the same as a regular volley back over the net.

Fun Fact: The term half volley also applies to other sports like cricket where the terminology is the same; the ball is hit immediately after making contact with the playing surface. It’s even common in soccer.

If you’re looking for a great beginner racquet I’d recommend the Babolat Pure Drive.  I’d go with the 1/4” or 1/8” grip if you’re brand new.  At 310 grams its got a little extra weight for added power and is priced just right for someone looking to take the next step!

What Is The Difference Between A Volley and A Half Volley In Tennis?

The difference between a volley and a half volley in tennis is whether the ball bounces or not.  While a traditional volley is hit out of the air, a half volley allows for a bounce albeit a very short one where the ball is struck almost instantaneously with the ball hitting the court.

For my complete guide on the traditional volley in tennis, and how it's making a comeback, click here.

Traditional volleys use short and compact strokes, not letting the racquet come back behind the player’s shoulders and almost never require a full swing to return the ball. But, if the ball bounces within a reasonable distance of the player, it can often be returned using a forehand or backhand groundstroke.

However, there is an exception to this bounce rule. If the ball bounces closer to the player’s feet and the player returns the ball without swinging the racquet back beyond the shoulder plane, then it is classified as a half volley.

Essentially, determining whether or not a stroke is a volley depends on if the ball has bounced and how you swing the racquet. If your swing follows through across your body or starts by swinging the racquet from behind the shoulders, then it is not a volley.

Even though the ball has bounced first, a half volley stroke can still be considered a volley because of the racquet positioning and hitting method. The last significant distinction is that the ball should be hit before it reaches its apex height off of the bounce. 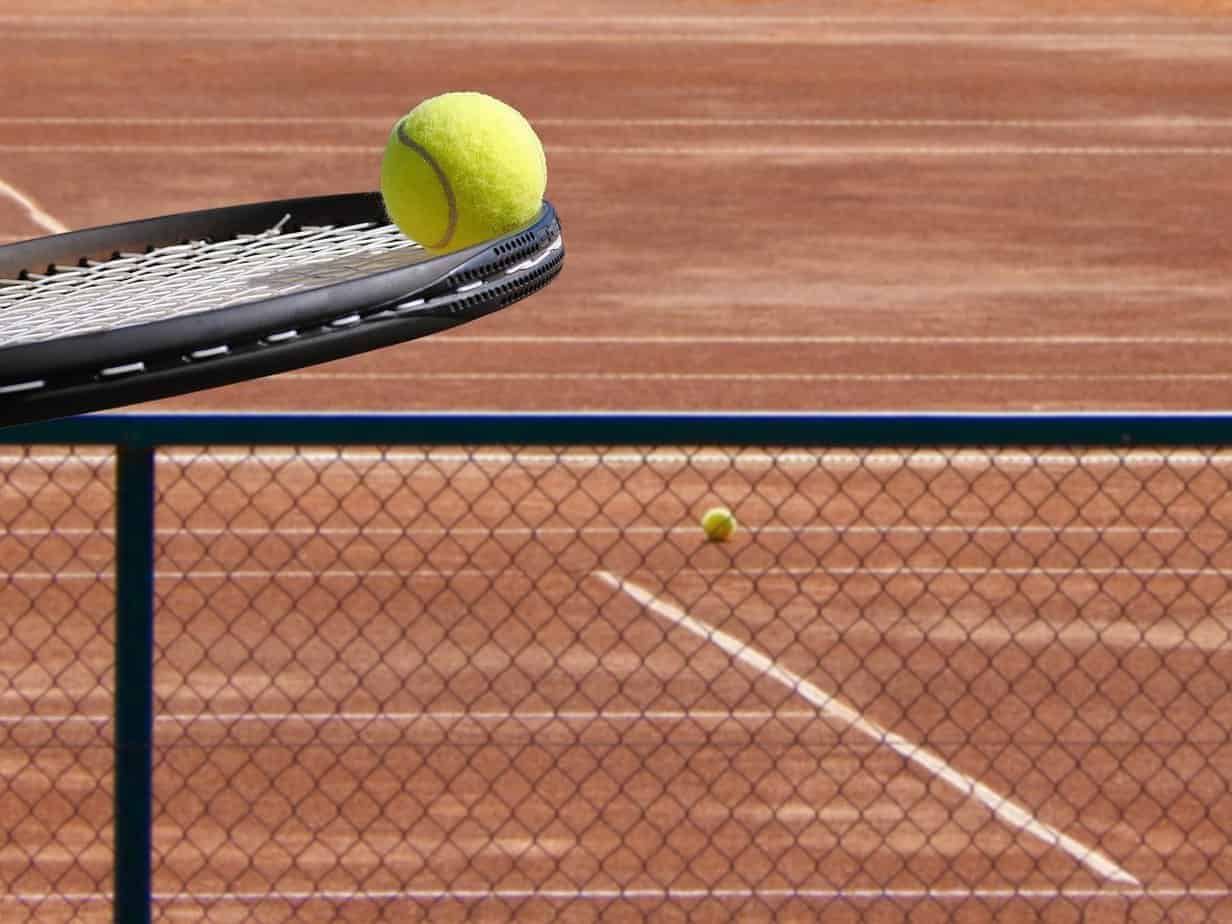 Image by No-longer-here from Pixabay

When To Use a Half Volley

A half volley can only be used after the ball has hit the ground, however it is challenging to execute consistently. The half volley can be an extremely effective shot in tennis but getting it to be "on target" can be difficult for new players.

Hitting a half volley may not be too difficult, but getting the ball to land where you want it to, is another matter. Pin point accuracy with half volleys is the hardest thing for newer tennis players to master.

Generally, a player would be in the position to hit a half volley if the ball is coming to his/her side of the court and he/she does not have enough time to get to the ball before it bounces.

However, once you hit the ball, move positions so that you are set up better for the subsequent return.

How Do You Hit A Half Volley In Tennis?

In reality the half volley is more of a “block” type of shot than a swing.  If you’re swinging through on a half volley, chances are you’re doing it wrong.

So how should you properly hit a half volley in tennis?

The proper way to hit a half volley starts with almost zero backswing involved. Instead, keep your elbows in and take a half swing and make contact right after the ball has hit the court.  From there, keep your racquet face square and follow through to your target.

From a technique stand, keeping your elbows in is super important.  This is what allows you to not over swing and turn it into a ground stroke.

Remember, the half volley is a short block or rebound shot that doesn’t require much power for it to be effective.  You’re using the previous shot’s own momentum to create the rebound effect on your half volley.

Essentially, the power is already there and you're using it to your advantage.

Fun Fact: Did you know that let serves are one of the most misunderstood rules in all of tennis?  Here are the facts.

Other Tips and Techniques to Improve Your Half Volley

Now that you know the basic form for half volleys, we can discuss some important tips and techniques to improve your tennis game and make you a more well-rounded player by consistently incorporating the half volley.

3 Keys To Better Half Volleys In Tennis

There are three important keys to remember as you practice and execute the half volley: how your body is positioned, how your racquet is positioned, and your body's momentum. In this section I will outline specific ways to execute the proper strategic positioning for each.

As you approach the ball to hit the half volley, the nature of the stroke requires that your body is positioned a little lower to the ground.

You are meeting the ball before it gets to the apex of its bounce, so it requires a bit of a crouch. So keep your knees bent.  Hitting a half volley well means that your body is positioned slightly lower than your normal tennis ready position.

You also have to consider the positioning of your racquet. For the stroke to be classified as a half volley, you cannot swing your racquet beyond your shoulders.

To help mitigate the length of the swing, it is helpful to position your racquet in front of your body. This positioning essentially forces you to do the necessary short and compact stroke for a half volley.

The last thing to consider is the momentum of your body. During a half volley, you always want your momentum to be going forward. Your body might naturally want to lean to the side or back, but this will limit your accuracy.

Moving forward also ensures that your racquet is also moving straight forward for a more controlled and accurate volley. 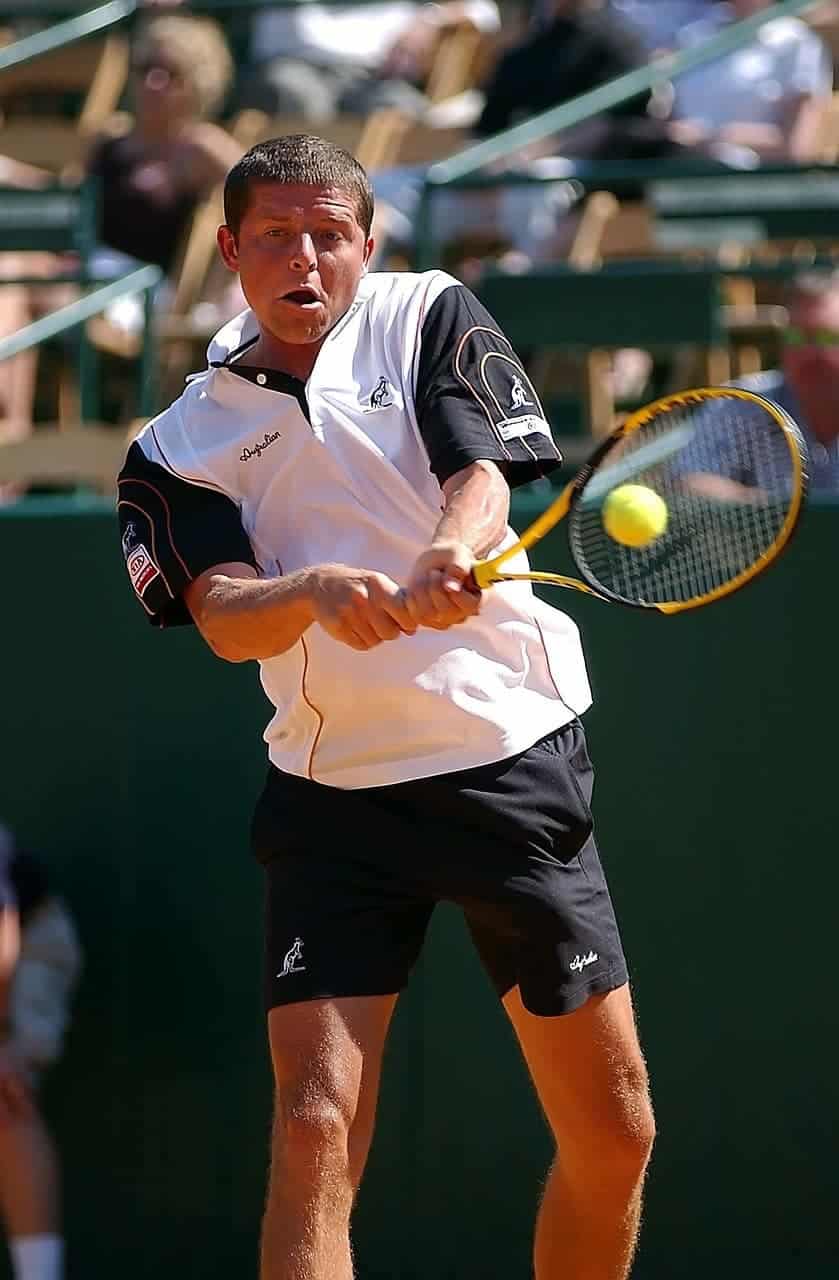 mage by Keith Johnston from Pixabay

There are a few different ways you can hit the ball during a half volley, including a block or drop shot. These techniques are borrowed from other volley techniques, such as the block volley and the drop volley.  The cool part is, you can execute these types of techniques in the half volley too!

The block volley is generally used when a player hits a high-speed ball in your direction. It doesn't require any forward momentum from your racquet because the ball was already hit at you with so much speed.

So, to execute this in the half volley, you simply put your racquet out to "block" the ball. This type of half volley can be very technically challenging because the faster the incoming ball, the more difficult it can be to control and return immediately after the bounce.

Remember, when you use the block volley technique in the form of a half volley, you’re simply rebounding the ball back over the net like a wall would.

The second technique is the drop volley. The goal of the drop volley is to land the ball just barely on the other side of the net in your opponent's court.  A drop shot on a half volley return is super effective and a little bit easier to execute than the block technique.

Even when executing this shot in half volley form, the goal is to drop the ball back over the net and have it just sit down, with little to no movement after the bounce.  This will require your opponent to run to center court from the baseline before your half volley drop shot bounces a second time.

With enough practice, you’ll drop it in right beyond the net where your opponent has the least amount of time to run and get under it.

What Is A Half Volley In Tennis - Final Thoughts

The half volley in tennis is a shot all pros use with lethal results.  But it’s also a shot amateurs and casual players can learn and master too.  Hopefully after reading this guide, you’ll be able to improve your half volley technique and add it to your repertoire of shots.

The half volley in tennis is a shot that requires little to no backswing, but instead uses a blocking motion where your forward momentum generates the power.  Keep your elbows in when hitting the half volley, and time it so that your racquet makes contact literally fractions of a second after the ball has bounced.

I hope this has helped you gain more confidence in trying the half volley and how it can be a game winning shot when used properly. Good luck, now get out there and practice!