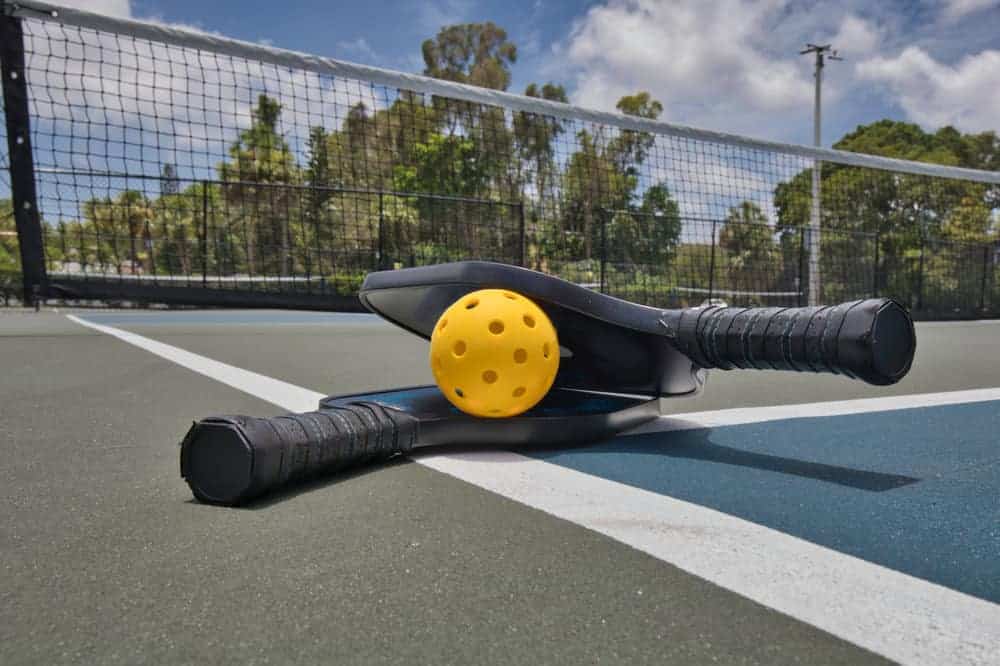 The most unique area on a pickleball court has got to be the non-volley zone.  This is the one area on the court that new players struggle with because of the rules associated with entering it and the types of shots allowed while inside it.

So, if you’re a beginner at pickleball and wondering what the heck this area on the court is all about, then this article is designed for you.  This beginner friendly guide is dedicated to teaching a new player all about the non-volley zone and it’s rules.

The non-volley zone in pickleball is the 7 feet of court on either side of the net affectionately known as “the kitchen” where any player that enters it, must only hit groundstrokes.  Hence the name, no volley shots are allowed while standing within this area on the court.

Let’s talk more about the non-volley zone and the rules associated with this area on the court.

Looking For A Great Beginner Paddle?

If you’re a beginner, I highly recommend the Prince Response Pro. This paddle has the biggest sweet spot I’ve ever experienced and really helped improve my accuracy both at the baseline and at the net. It’s worth every penny!

What Are The Rules For The Non-Volley Zone In Pickleball?

The non-volley zone is aptly named because of what it doesn’t allow – volleys. This means you cannot hit the ball in this zone until it has touched or bounced on the ground first. Otherwise, you’ve performed a fault and will lose the point or the serve depending on if you’re the serving team or the return team.

Additionally no player can come in contact with the non-volley zone when performing a volley. This means their shoes, clothes, and even paddle must stay behind the no-volley zone line when hitting the ball out of the air.

The non-volley zone is a “groundstroke only” area on a pickleball court, and it’s unique to the game of pickleball.

Fun Fact: Only the game of pickleball has an area on the court like this.

The rule also applies to forward motion after volleying the ball. So that means that if you hit a volley outside of this area but then your momentum brings you in contact with it, it’s a fault.

Remember, this is only for a volley. If the ball bounces off the ground first, you can enter the non-volley zone without breaking any rules no matter where the ball bounced first.

Additionally, if you’ve entered the non-volley zone but want to hit a volley, your body must be completely outside of the zone before hitting a volley. So, reaching back to connect with the ball from the no-volley zone before it hits the ground is illegal.

However, it is legal to stand at the non volley line and reach over it to hit a volley as long as no part of your body, paddle or clothing comes in contact with the no-volley zone area.

Why Was The Non-Volley Zone Line Created In Pickleball?

Early on, when the game was in its infancy, the non-volley zone line was created to keep taller players back from smashing the ball right at the net all the time.  Dick Brown was a friend of the 3 dads that created the game and he was an aggressive player standing 6’4”.

Well, as the rules began to develop, Joel Pritchard, Bill Bell and Barney McCallum told their friend Dick that he had to stay behind the “short serve line”.  Because the game of pickleball was born on an old badminton court, the short serve line was 6’6” away from the net and eventually got pushed back to 7 feet and became the non-volley zone line as we know it today.

But, it was born out of necessity to keep taller, more aggressive players from smashing the ball right over the net all the time.  When you think about it, this 7 foot court line really does even the playing field out a little and keeps taller players from having an extreme advantage.

Is The Kitchen The No Volley Zone?

The phrase “you can’t go in the kitchen until the ball bounces” has become common place in the game of pickleball.

While there are many theories as to why it’s called the kitchen, the full truth has never really been revealed.

This means that your serve must be deep enough that it lands beyond the kitchen line but still within the baseline.

What happens if your serve lands on the non-volley zone line?  If this happens, it is considered a fault and the serve is lost.  Your serve cannot touch any part of the no-volley zone line.

In fact, this is the only line on a pickleball court that when hitting the line, a fault or error is called.  If you hit the baseline, centerline, or a sideline during the serve or at any point during a rally, the ball is considered in.

But on a serve, if the ball hits the kitchen line, it must be called as “short”.  So, the best thing to do on any serve is to aim long.  In fact, aim deep for the baseline.  Serving deep is one of the most fundamental pickleball strategies there is in the game.

A deep serve is harder to return and it ensures you don’t hit the kitchen line and commit a fault.

Can The Return Of Serve Land In The Kitchen?

Hitting a return of serve short into the kitchen isn’t recommended for two reasons.

Hitting short on the return negates the advantage that the return team has.  Remember, due to the two-bounce rule, the return of serve has to bounce, so hit the return deep and force the serving team to have to play it off the bounce way back at their baseline.  This gives you time to get to the kitchen line first.

The longer the serving team has to play at their own baseline, the bigger of an advantage the return team has.  So, while hitting the return of serve into the kitchen area is legal, it is not a wise strategy.

Can You Stand In The Kitchen In Pickleball?

So, there really is no point in standing in the kitchen.  And any smart player will recognize this and use you as target practice because if the ball hits you or touches your paddle before bouncing, it’s a fault.

This is why you see everyone standing at the kitchen line and not inside of it.

What Is The Non-Volley Zone In Pickleball – My Final Thoughts

So now you have all the details behind what the non-volley zone is in pickleball along with the rules associated with it.  I even covered what you can and can’t do while standing in the non-volley zone and gave you a glimpse into the history of the game and this area on the court.

By now, I hope you feel like the kitchen line expert and are ready to learn even more about the game and teach it to others.  Go spread the word on pickleball!