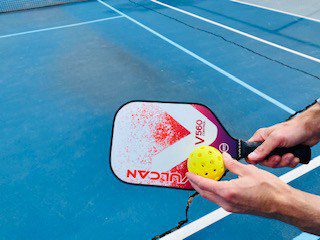 Pickleball is an enjoyable sport to play with friends on a sunny afternoon or with a team in an indoor or outdoor facility. But sometimes the courts are crowded and you’ve got to wait your turn to go in and play. And when you’re addicted to a game like pickleball, waiting can be hard. Which makes me wonder, how long does a game of pickleball last?

This article will look at the factors that determine the length of a pickleball game and the difference in time between a recreational game and a tournament level one. You’ll also learn about the longest pickleball game ever played and how the sport compares to its common ancestors, tennis, and badminton when it comes to how long games are played.

The Length Of A Standard Recreational Game Of Pickleball

In a recreational game of pickleball played with either singles or doubles, the length of time can be anywhere from a quick 15 minutes to up to 25 minutes. Keep in mind this is factoring in just a single game played to 11 without the game going longer.

Some games can go beyond 11 because the game is close and one team must win by two points. So, if your team is playing a team similarly matched, it may take up to 13 or 14 points to win the game by two. For example 13 to 11.

But the length of time a pickleball game lasts goes beyond just each team’s skill level. There can actually be several factors that affect the time of pickleball, which include:

Game Length Factor 1 – The Pace of the Game

The pace of the game can really dictate how fast or slow a game of pickleball is played. The pace can be dictated by any number of things but age and skill level play a huge role. Here’s what I mean by that.

Age doesn’t necessarily mean that older folks looking to stay active (which is very common in pickleball) are going to take longer to play a game of pickleball. In fact, it’s the opposite. Most adults whether they’re in their 20s to 30s or even 60s and 70s can play a relatively efficient game of pickleball.

I’m a perfect example. I’m in my 40s but play all the time with folks older than me in their 50s and 60s. I even play with some younger players in their 30s.

No matter who I’m playing with age-wise, if they’ve all played before, the game typically lasts the same amount of time – 15 minutes. Playing with people at your skill level is key though. More on that in a minute.

Conversely, school-aged kids typically need a longer amount of time to play a game of pickleball. Mainly because they’re still learning the flow of the game and the fundamental techniques.

I’ve experienced this firsthand as well. I’ve got two sons and a niece and nephew who I play with. They’re younger and sometimes a game of pickleball with them takes longer because the game isn’t played as aggressively. Meaning rallies tend to last longer.

They’re also more evenly matched at a lower skill level so games tend to take 20 minutes or longer to determine a true winner.

Well, there are a few things to consider.

In doubles, if one team or even one player is really good or on a hot streak, points can rack up quickly for that team. I’ve been on a team where my partner was serving really well and we jumped out to a quick 6-0 lead. A few breaks here and there and all of a sudden we were serving again and I got hot.

Some doubles games just go quickly when one team jumps all over another team. And I’ve been on the other end of that too where a team’s lead just snowballed on us and we were outmatched. Those games tend to end quickly.

Compare that to a singles game where a score can be locked at 1-1 if the server never puts a point away. Just this year, I introduced a buddy of mine with a strong tennis background to the game pickleball.

He had never played before but had loads of tennis experience so when we hit the pickleball court, it was an even match-up for the first half of the game. It seemed to take forever for someone to get to six points or take a commanding two-shot lead because whenever one of us won the serve, we then failed to capitalize on it and lost the next point.

If neither team wins their serve, the score can get stuck in spots and this tends to happen more in singles pickleball. So some singles games can easily last 20 minutes or longer if the two opponents are similarly matched.

Can playing outdoors or indoors make a pickleball game longer or shorter? Well, the answer is yes to some degree. But generally speaking, games indoors aren’t considerably quicker. Without door play, the elements can be a factor for how long or short a game is.

The heat will make even the best athletes more exhausted and dehydrated, which can make you slower and more sluggish.

Outdoor play is also a factor because the ball you use for outdoor pickleball is different than an indoor ball and tends to play faster. This, along with the heat, can lengthen games considerably.

Another outdoor element to factor in is the wind. I’ve played many times outside where the wind definitely plays a role. If the ball is flying all over for both teams, this can make it difficult to get points. And if scoring is hard to come by, games will be longer.

So, all in all, indoor pickleball ganes tend to be a little quicker because you’re not fighting outdoor elements or factors.

Additionally, having numerous faults during your game can cause the game to move quicker than if you were to have more rallies. Faults can occur at any time during a point, such as stepping into the non-volley zone, or hitting the ball out of bounds. For more helpful info on what consititutes a fault in pickleball, I created this helpful beginners guide.

These simple unforced errors can speed up a game considerably and prevent rallies. If one team can’t get out of their own way and is committing unforced errors left and right, the game tends to move along at a good clip.

On the opposite end of the spectrum, having more rallies than faults can prolong a game because the ball is continuously kept in play and the point is extended. Simply put, rallies extend points and thus extend the length of a pickleball game.

My last pickleball game length factor is an obvious one – skill level. As you might imagine, if two players are going against each other but one is considerably better than the other, the game is going to go quicker with the more experienced player winning quickly.

I’ve been on both sides of this situation.

I’ve played a friend who was brand new to the game and beat him fairly quickly 11-6. On the other side, I’ve played a 5.0 level player who coaches pickleball for a living and he beat me 11-0. So, that game was over in the blink of an eye.

The game was short and my ego was injured badly. But hey, it was still fun playing against someone that good. I actually learned a lot.

Most of the time, I’m playing pickleball players at my skill level or slightly better. So those games last a good 15 to 20 minutes and are super enjoyable no matter what the outcome is.

So, it’s kind of simple. Play with others that are at your competition level and the game will be longer but more enjoyable. But, when someone plays someone completely out of their league, the games will be over quickly.

The Length of Pickleball Tournaments

Pickleball tournaments are slightly different from casual, recreational games due to the increased point system and multiple rounds of players competing for the championship.  Tournament games are set up to be completed within 40-60 minutes, and as the tournament goes on and players move forward, the games can become longer.

*It is worth noting some pickleball tournaments have only one longer game but its played to 15 or 21 points. This however, is rare.

Pickleball tournaments first came about in 1976 with the creation of the USAPA, or the USA Pickleball Association.

Today, the USAPA tournament takes place at the Indian Wells Garden in Indian Wells, California, near Palm Springs. The tournament is held over eight days with 2,500 players competing. There is also an International Federation of Pickleball (IFP), which includes 37 countries and usually takes place in Florida over five days.

Tournament events are split up into divisions based on gender, age, single or double teams, mixed doubles, junior, and para-pickleball competitions, and even include pickleball players competing in wheelchairs for para-pickleball.

Based on these divisions, tournament games are set up to last longer because the players are typically evenly matched.

Para-pickleball competitions are played similarly with the same rules and guidelines, and take about 20 minutes for one game.

The Longest Pickleball Game Ever Played

Before you think sitting through a tournament for seven or eight hours would be too long, take a look at the game played by Justin Lawrence and Jeffrey Baker in 2011. Their game lasted a record-breaking 24 hours! Don’t worry; even tournament-level games of pickleball nowadays never last that long, and the players admitted to playing for an entire day to make a world record.

The shortest game of pickleball has not been recorded yet, so there’s some inspiration for you to achieve that world record! Although I may unofficially hold that record after being crushed by a 5.0 pro 11 to 0. But hey, nobody was officially keeping track.

Since tennis and badminton are the common ancestors that gave birth to the game of pickleball that we know today, there will be many similarities in play, scoring, and length of the game.

We already know that pickleball games can last anywhere from 15 minutes to 20 minutes, and badminton is similar with an average match time of 40-50 minutes. There is three games in a badminton match so that means each game lasts about 20 minutes; very similar to pickleball.

On the other hand, tennis has a wide range of time lasting anywhere from 90 minutes to 2 hours and 45 minutes based on how many games and sets are played to make up the entire match. Generally speaking, a full match of tennis is going to be longer than a full set of pickleball or badminton. But it’s not necessarily because of the court size.

How Does A Pickleball Game End?

Outside of some unique tournaments, all games of pickleball end when one team reaches a score of 11 or has one by two points.

Like I pointed out above, there are some different tournaments out there that don’t play numerous games to 11 but instead have one longer game to either 15 or even 21 points.

But the rule maintains the same there too. When one player or team has reached a score of 15 or 21 or won by two points if the game goes beyond that, a winner is declared.

How Long Does A Game Of Pickleball Last – Conclusion

Now that you’ve learned what happens during a pickleball game, how long pickleball games can last, whether it’s for recreation or a tournament, and how pickleball compares to other types of sport such as badminton and tennis, you can finally go out there and get your game on!

Although you now know how long a game of pickleball should last, it’s important to remember whether you are playing yourself or you have kids playing, it’s best to not focus so much on the time and length of the game, but to focus on the game itself for maximum enjoyment.