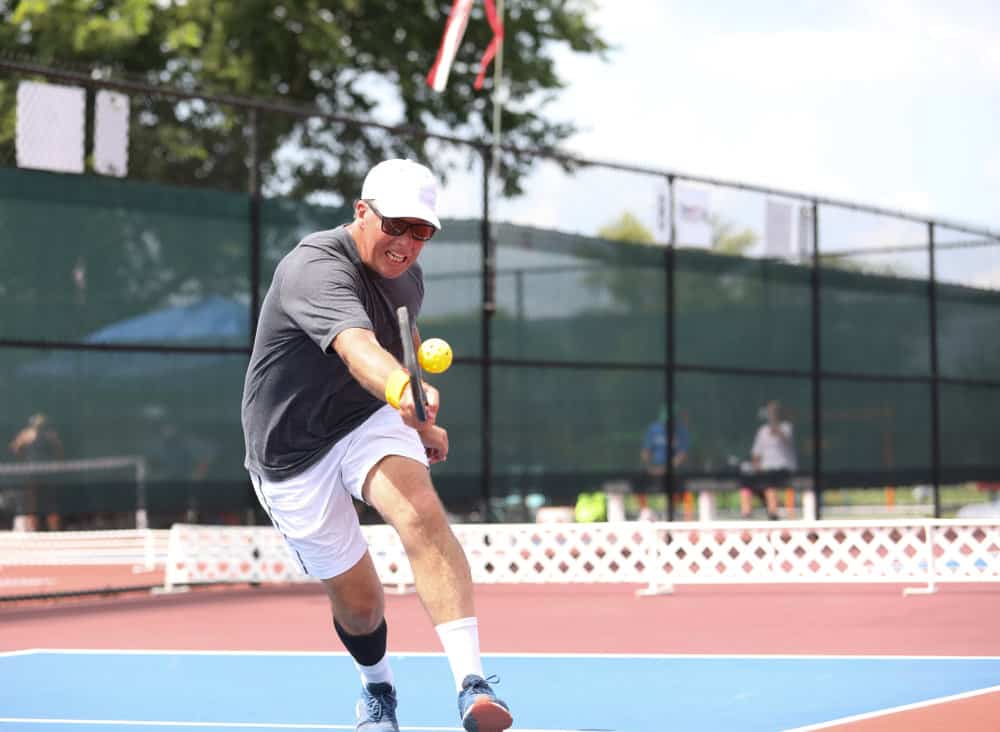 You often hear the term ‘rally’ in sports like tennis, especially when things are heating up in a match. And while it’s important for that racquet sport, it’s even more vital to understand what rallies are when playing pickleball since the rules of pickleball are designed to encourage them.

So that begs the question, what is a rally in pickleball?

In pickleball, a rally and a “point” are related but are actually two different things.

In this article, I’ll cover what a rally is, how it’s different than a point and outline rally scoring, and more. Let’s get into it!

Real Quick – Looking for a simple set of pickleball rules you can print off and take with you to the courts?  Look no further!  Check out my simple printable pickleball rules one-page sheet designed for beginners!

Looking For A Great Beginner Paddle?

If you’re a beginner, I highly recommend the Prince Response Pro. This paddle has the biggest sweet spot I’ve ever experienced and really helped improve my accuracy both at the baseline and at the net. It’s worth every penny!

A Rally Versus A Point In Pickleball

A rally in pickleball is everything that happens after the serve but before a fault or an error is committed.

Depending on who served, that fault may or may not result in a point.  Remember, in pickleball one of the main rules is that only the serving team can earn a point.

Conversely, if the return team hits a winning shot down the line that the serving team cannot return back, the rally does not end in a point.  The result is that the server loses serving privileges.

The serve then goes to either their partner if playing doubles or it goes to the opponent so they can then try to earn a point.

So, points and rallies in pickleball are connected but are two very different things.

To start a rally, all you need to do is serve the ball over the net to a player who then returns it back to you. This is considered a two-shot rally if the ball crosses the net since you include the serve in the shot count.

This example is also as short as a rally can be; just two shots.

From there, rallies can become long and intense, involving players sending shots to and from all corners of the court.

In fact, the Guinness book of world records claims the longest pickleball rally was over 16,000 shots and took well over 6 hours.  It should be noted though, that this was not in a competitive or tournament-level environment.  It was purely for fun and for the record.

An entertaining rally at the tournament level is usually anywhere between 7 to 15 shots in length.

How To Lose A Rally In Pickleball

Rallies don’t last forever. They can be long and grueling, but they have to come to an end at some point. You lose a rally in pickleball when you commit a fault, and there are many ways to do this.

Your Opponent Beats You

The most common way to lose a rally is when your opponent hits a shot you can’t return. This happens when the ball bounces twice on your side of the court — as long as all the shots are in-bounds.

Sometimes your opponent will hit a powerful shot that lands in bounds before flying past you (this is called a passing shot), and other times they’ll make a more subtle play that softly bounces twice on your side of the court. In either case, you lose the rally.

And depending on who served, a point may or may not be awarded.

You Hit the Ball Out of Play

The ball is also considered “out of play” if you fail to hit it over the net and it stays on your side of the court.

Volleying Inside The No-Volley Zone

One of the features of pickleball that makes it so unique is the rectangle stretching out seven feet from either side of the net, called the ‘no-volley zone.’ Players can hit the ball from this area, but it must bounce first. If you hit the ball in mid-air from this area on the court before it bounces it’s another fault that ends the rally.

What Is Sideout Scoring In Pickleball?

Sideout scoring in pickleball is a system used where players can’t earn points unless they’re serving. If the serving player or team loses a rally, they lose that serve and the next player in line serves. You can only earn points if you or your team served to start the rally.

Most racquet sports began with sideout scoring but switched to rally scoring. Pickleball is one of the few exceptions.

What Is Rally Scoring In Pickleball?

Even singles play at pickleball tournaments is all sideout scoring.

However, you may see rally scoring used in less formal settings where the play is more casual or recreational.  Rally scoring in pickleball is more common in casual singles play so that it helps speed up the match.

The Difference Between Rally Scoring and Sideout Scoring

Sports like tennis, volleyball, and badminton switched to rally scoring long ago, mainly to make game times shorter. Under a rally scoring system, both the serving and receiving team can win points at the end of each rally, but service changes work the same way.

So if the serving team loses a rally, they lose the serve and the point.  This helps speed up the game and match considerably. In rally scoring, someone is always winning a point, ending the game much quicker.

This ultimately makes game times shorter than sideout scoring because under sideout scoring, it’s possible for neither team to win points for long stretches of time. Instead, they would only lose their serve.

Because pickleball has stayed true to sideout scoring, points come at a premium and are always earned.  Making the game feel like a more defensive battle.  Despite pickleball being prone to long droughts of scoring when skill levels are evenly matched this actually makes the rallies even more fun to watch.

What To Do At The End Of A Rally In Pickleball

When a rally ends, a few different things can happen depending on several factors.

Related: Looking for some simple tips to improve your serve as a beginner?  You must read this!

The inventors of pickleball designed it with fun in mind, and nothing is more fun in racquet sports than a good rally! The two-bounce rule ensures that tactics like the serve-and-volley strategy seen in tennis, are not abused to end a point early.

In fact, they’re eliminated entirely because of the double-bounce rule.

Instead, the advantage of serving is minimized, creating longer points.

Players have the chance to get set up rather than being forced to scramble all over the court early in a rally, and players of all abilities have a decent shot at a successful play.

What Is A Rally In Pickleball – My Final Thoughts

Rallies are encouraged in pickleball via the two-bounce rule. This leads to points being slightly longer than in other racquet sports where players use tactics like the serve-and-volley to win points quickly.  This is uncommon in pickleball.

In pickleball, you don’t see a lot of aces when serving and the serve and volley tactic is virtually nonexistent because pickleball is a sport built for rallies. It’s rules are designed to create rallies and extend them.

You can win a rally in many different ways, all of them requiring creativity and skill.  Now get out there and win that rally!