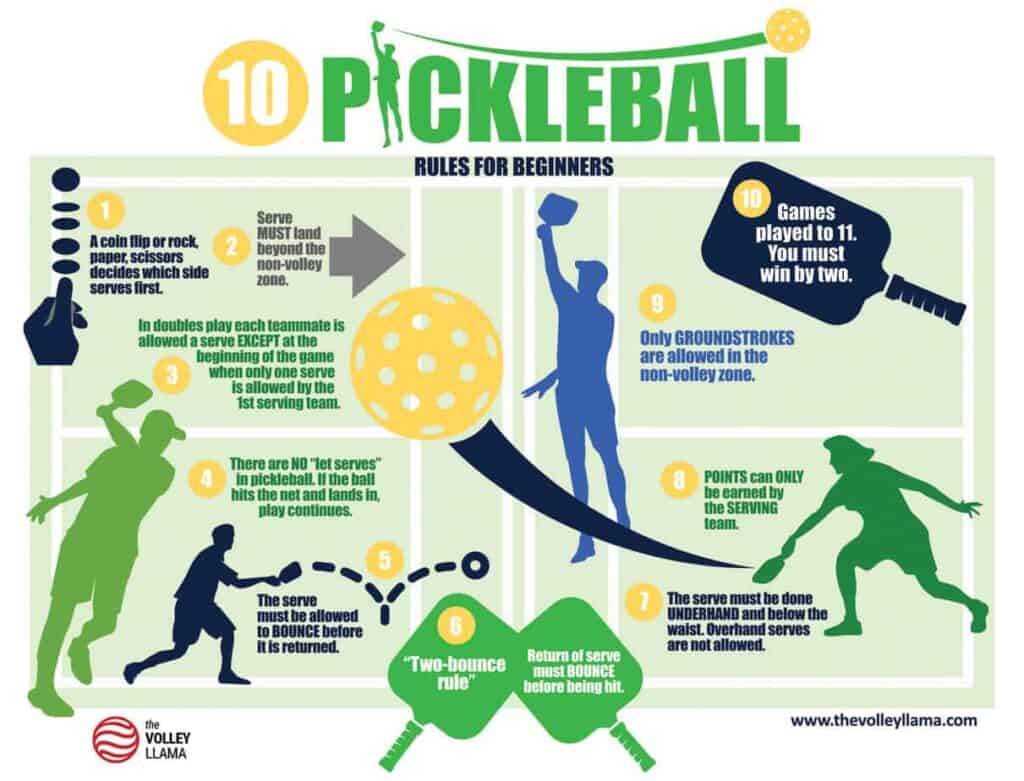 One of the things I wish I had available when I first started playing pickleball seven years ago was a nice looking, easy-to-follow pickleball rules sheet that was printable! Having a simple PDF that I could easily print off and follow as I learned the basic rules of the game would have been great!

So, that’s what I’ve decided to create for you!

If you’re new to the game of pickleball, and are still learning all the rules, but want an easy printable pickleball rules single page sheet you can take anywhere, then you’re in the right spot!

I’ve created a colorful infographic outlining the most basic rules of the game. These are the 10 most common rules of pickleball in an easy-to-follow printable format.

I’ve given you two easy ways to print this pickleball rules one-pager.
1. Just click the printer icon from the image below.
2. Or click the hyperlink below the image to download the file yourself and print it from there.

Keep reading for a brief description of each of the 10 rules outlined above. Again, these are the 10 most basic rules you’ll need to learn the game! If you want to read a more in-depth breakdown of these 10 rules along with some beginner-level strategy thrown in, check out this accompanying post here.

For the sake of this article though, I’ll keep things simple.

Pickleball is fun because it doesn’t take itself too seriously. And the start of the game showcases that perfectly! The game starts with a simple coin flip or a friendly game of Rock, Paper Scissors to see which side serves first.

Click here for why the strategy of serving deep is always the best strategy.

This rule is one of the most wacky rules in all of pickleball. In singles play, the first server goes until they lose a point. Then the serve goes to the other player. But in doubles pickleball, there is one subtle change.

The doubles team that gets to serve first only gets one crack at it. But this is only to start the game. This is why the game starts with the score of 0-0-2. This means the score is “zero to zero; second server.”

To start the game, the doubles team who serves first selects their second server to begin the game. As long as they keep winning points, that person keeps serving. Once a point is lost however, serving privileges go to the other team.

However, from here on out during the game, each player from each team gets a chance to serve.

Unlike tennis, in pickleball you only get one serve. Meaning when its your turn to serve, there are no lets. If your serve lands out or lands in the net, you’re serve is lost.

If your serve hits the net but still lands in (beyond the non-volley zone line and within the sidelines and baselines), then play continues as it normally would.

Rule #5 – The Serve Must Bounce

This is a simple rule, and one you will be very familiar with if you’re coming from a tennis background. When returning the serve back over the net, you must let the ball bounce first.

There are no volley shots allowed when returning the serve back in pickleball, or any other mainstream racquet or paddle sport for that matter.

The “two-bounce” rule in pickleball is a rule that says both the serve AND return of serve must be allowed to bounce for being hit back over the net. This rule is unique to pickleball and takes the advantage away from the serving team.

This rule has a profound effect on the serving team because it effects them the most. By forcing the serving to have to let the return of serve bounce, this rule lets the return team get to the net or no-volley zone line first. And whoever gets to the net first in pickleball, has the advantage.

In the end, this rule makes it harder for the serving team to earn a point.

Click the link for my beginner friendly guide to the double-bounce rule.

Rule #7 – The Serve Must Be Underhand And Below The Navel

Another unique rule to the game of pickleball is that the serve must be done underhanded. An overhead serve, like you see in tennis is illegal in pickleball.

In addition, the paddle must make contact with the ball below your waistline or navel area. Serving underhand may sound easy but for some it takes some time to get used to. Underhand doesn’t always mean easy. So take your time and make sure your underhand swing motion is consistent every time.

Serving underhanded in pickleball means super fancy serves with extreme spin or speed are more difficult to master. So if you’re just starting out, forget the advanced techniques, just make sure your serve is always in, and deep.

For more tips on improving your serve, click here.

Rule #8 – Point Are Only Earned When Serving

What makes pickleball so uniquely challenging is how points are awarded. Earning a point in pickleball can only be done by the team that is serving. So, if you or your partner are serving and you win the rally, you earn a point.

If you’re serving and your opponents win the rally, they don’t get a point but, your serve or your partner’s serve is lost.

In pickleball, the serving duo each gets a chance to serve and earn a point. If server one loses the rally, the serve then goes to their partner to try to earn a point. If the second server loses that rally, then the return team earnes the right to serve.

The easy way to remember pickleball scoring is this – you’re either earning points as the serving team or your earning the right to serve if you’re the return team.

Rule #9 – No Volleys In The Non-Volley Zone Area

The non-volley zone, also called “the kitchen” is the seven feet of court on either side of the net where if you step into this area on the court, the ball must bounce first. Only ground strokes are allowed in the no-volley zone area…hence the name.

If you happen to hit a volley with your foot on or over the kitchen line, it is a fault and the point is lost.

Pickleball games are traditionally played to 11. And while that may not sound like much, a game to 11 can actually take anywhere from 10 to 20 minutes depending on the level of competition. I’ve seen games fly by in under 10 minutes when one team is way overmatched.

But, you must also win by two. Meaning if the score is 10 to 10, the winning team must then get to 12 in order to win the game. Because of this rule, I’ve played in games that went beyond 13 points and easily took 20 minutes to complete.

Playing to 11 is the goldilocks approach. Its just the right number to play to.

Despite these being the most basic and common rules to the game of pickleball, they are atill a lot to remember. I wish I had a printable pickleball rules sheet like the one I created above when I was still learning the game. It would have drastically shortned my learning curve.

So go ahead and print the infographic at the top. The only reason why I created it was so that new players like you could have an easy, one-page sheet you could print out and take to the courts as you learned the game. Enjoy!