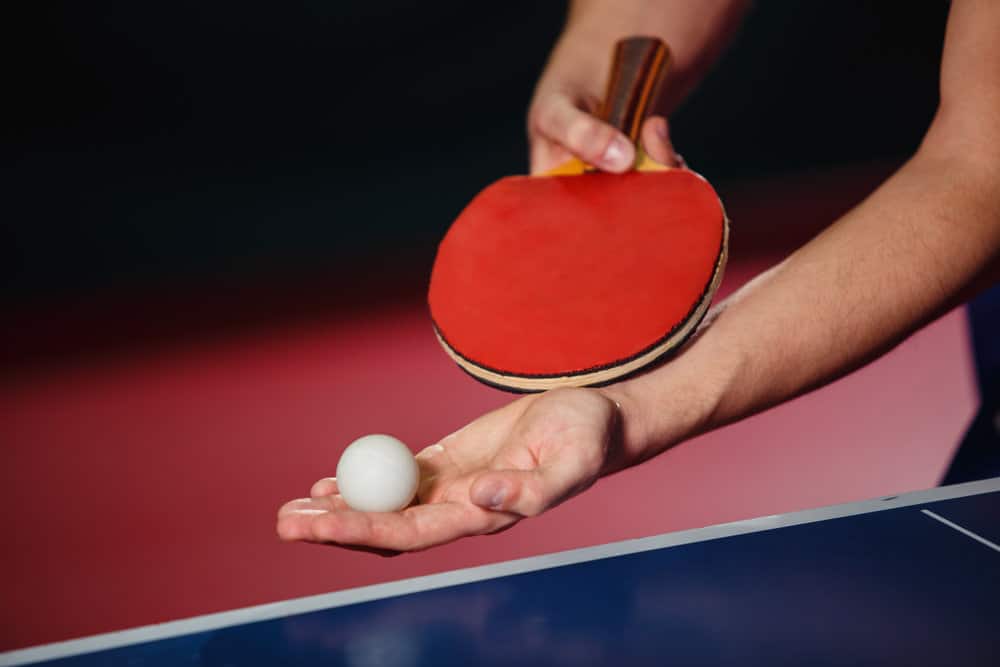 I’ve been playing recreational ping pong for most of my adult life. But I also played for fun as a kid. And through the years, the one aspect of the game that has proven to be the most important for me is my serve. Whether you’re playing competitively or just for fun with some buddies, a lethal serve with speed and spin can make all the difference. But what is a legal serve in ping pong?

A legal ping pong serve is one where the ball starts on the open palm of the server’s hand and is tossed up at least 6 inches without any spin on the toss. Then the ball is struck and must bounce on the server’s side, clear the net, and then bounce on the opponent’s side before being returned.

Learning the key parts to a legal serve in ping pong is important but if you break it down into its individual parts, it makes learning each part a little easier. Here is how I broke it down…

A legal serve in ping pong is one that incorporates 5 parts:
1. The ball is held in the open palm of the off-hand
2. Tossed up at least 6 inches with no spin
3. Is hit so that it bounces once on the server’s side
4. Clears the net completely
5. Lands on the opponent’s side of the net

Now that we’ve broken a legal serve in ping pong down into 5 separate, simple-to-learn steps, let’s take a closer look at each step.

Related: If you’re looking for more on the basic rules of ping pong, I created this helpful beginners guide for dummies.

This ping pong paddle set is a great choice because it comes from a reliable ping pong brand in Joola and is very inexpensive. You get 4 paddles with quality rubber and 10 balls complete with an easy to use carrying case. All under 30 bucks!

Step 1 – Holding The Ball In Your Open Palm

Holding the ball in the open palm of your off-hand can feel a little awkward or silly at first. Even when I would watch pro players do this, it just seemed a little theatrical and unnecessary. But then I learned why this rule in serving is enforced.

Tossing the ball up from your open palm ensures there is no spin or ball manipulation.

Related: Click here for my guide on all the ways you can lose a point on a serve.

Step 2 – Toss The Ball Up 6 Inches With No Spin

First off, you might be asking yourself “do I have to toss the ball up 6 inches or higher to serve in ping pong?” The technical answer is yes. For it to be a ITTF legal serve, yes it must be tossed 6 inches or higher.

Now, if you are playing casually or still learning the basics and just playing with friends, then you can do what so many recreational players do and just hit it from any height so you can play for fun and learn the game.

Now, the next question I get around this is why. Why do you have to toss it up 6 inches or higher? The truth is most pros like to toss it up well above the 6-inch mark because it helps them track the ball and strike the ball on its downward descent and hit it at just the right height with the proper amount of spin.

The higher the toss, the easier it is (for pros) to hit the ball at the most opportune time. Any toss lower than 6 inches is illegal and may actually be more difficult to hit. It also doesn’t give the returner or an official judge enough time to make sure no spin was put on the toss.

This will get flagged immediately in any sanctioned level of play.

So keep it simple. Toss it up with no spin at least 6 inches, then work your magic.

Step 3 – It Must Bounce Once On The Server’s Side

After you’ve completed steps 1 and 2 and the ball is in the air and then struck, the ball must be struck so that it hits once on the server’s side before heading over to the other side of the net.

You cannot bounce the ball on the table and then hit it out of the air. Many beginners do this, especially kids, but technically speaking this is not allowed. But again, if you’re playing with someone who’s never played before and it’s purely recreational, I say it’s okay to allow this until they learn the basics.

Even when executing proper serve technique, new players can often run into issues at this step. Even when the toss is perfect, you may find yourself hitting the ball down onto your side of the table only to see the ball either go into the net or bounce off the table and out of bounds.

This is usually caused by where the ball bounces on the server’s side of the table. Here’s how to correct this.

So, strike the ball so that it lands towards your edge of the table, not towards the net.

Remember, the goal of any legal serve in ping pong is to keep the serve low so that the returner has to get under it and pop it up to return it. This creates an attackable ball for you on the third shot.

But if your serve is low to the table (like we want) but bounces closer to the middle of the table, it’s more likely to not make it over the net. So, make that bounce occur closer to your table edge when serving.

Click here for more on rules of the ball bouncing in ping pong.

Step 4 – The Serve Must Clear The Net

Even though we want our serves to be as low as possible, the ball must clear the net completely without making contact with it whatsoever. There is good news and bad news with regards to this step in a legal serve in ping pong.

So the lesson here is, if you’re trying to serve low, which you should be, and sometimes hit the net, just make sure it’s still landing “in” on your opponent’s side.

Fun Fact: The rules of unlimited lets in ping pong are the same in tennis! That’s right, both ping pong and tennis have an unlimited number of lets as long as the serve still lands in the proper spot after striking the net.

Step 5 – It Must Bounce On The Other Side

The final step to a legal serve in ping pong is for the serve to land on your opponent’s side after clearing the net.

In singles, the ball can land anywhere on the returner’s side of the table. In doubles play, the serve must land “in” on the opposite diagonal side from you and bounce in front of that particular returner.

The serve can land on the returner’s side either deep towards the edge or shorter in the middle of the table or even close to the net. There are pros and cons tied to each strategy.

If you want the ball to land deep and towards the edge of the table, great! This pushes your opponent back and forces them to have to hit a deep return back to you. But, this also allows them to let the ball drop and gives them a chance for a topspin return.

Hitting the serve short can be a good idea because it forces your opponent into a defensive shot where they have to get their paddle under your serve and pop it up. If they’re hitting up on the ball, then chances are you’ll have an opportunity to hit down on the ball with an aggressive shot and put it away.

The risk to hitting short like this on your serve is that these types of serves tend to hit the net or never make it over. So, advanced strategies take practice and patience.

If you’re still learning the game and working on your serve, I recommend keeping it simple. Keep your serve low and aim for a deep return from your opponent.

Do You Have To Serve Cross Court In Ping Pong?

This is a commonly misunderstood rule in ping pong where beginners automatically enforce tennis-like rules into the action. While they do apply to doubles, most beginners think this rule also applies to singles, when in fact it doesn’t.

Quick Tip: If you’re playing singles, mix it up and make your opponent work. Make then guess as to which side you’re going to serve to and if they’re weaker at a backhand, focus on serving to their backhand side.

Where Should You Stand During A Serve?

In doubles play, you must serve to the player diagonal opposite of you and again, you are allowed to stand outside of the sidelines of the table.

For proper stance, I recommend having your feet shoulder width apart with your dominant foot just slightly back in preparation for a good forehand shot. Additionally, when playing competitively, you should stand about an arm’s length away from the table in terms of distance.

If you’re playing casually, I’d recommend standing about 8 inches to a foot away from the table’s edge.

Is A Backhand Serve Legal in Ping Pong?

Yes, a backhand serve is legal in ping pong as long the same rules of a forehand serve are applied. A backhand serve must still start with the ball in the open palm of the off-hand, be tossed 6 inches or higher with no spin, and bounce once on each side of the table without touching the net.

What Makes A Serve Illegal In Ping Pong?

What Is A Legal Serve In Ping Pong – My Final Thoughts

In closing, I hope you’ve come away with a clear definition of what a legal serve is in ping pong and some tips on how to execute one. When you break down the rules of a legal serve in ping pong into 5 simple steps, it is much easier to grasp the concepts you need to apply.

Most of the technical rules of a serve in ping pong are not always followed in recreational play which is ok while players are still learning the game.

However, if you’re looking to play more competitively, start applying these 5 simple steps and you’ll be serving like the pros but also legally, in no time.