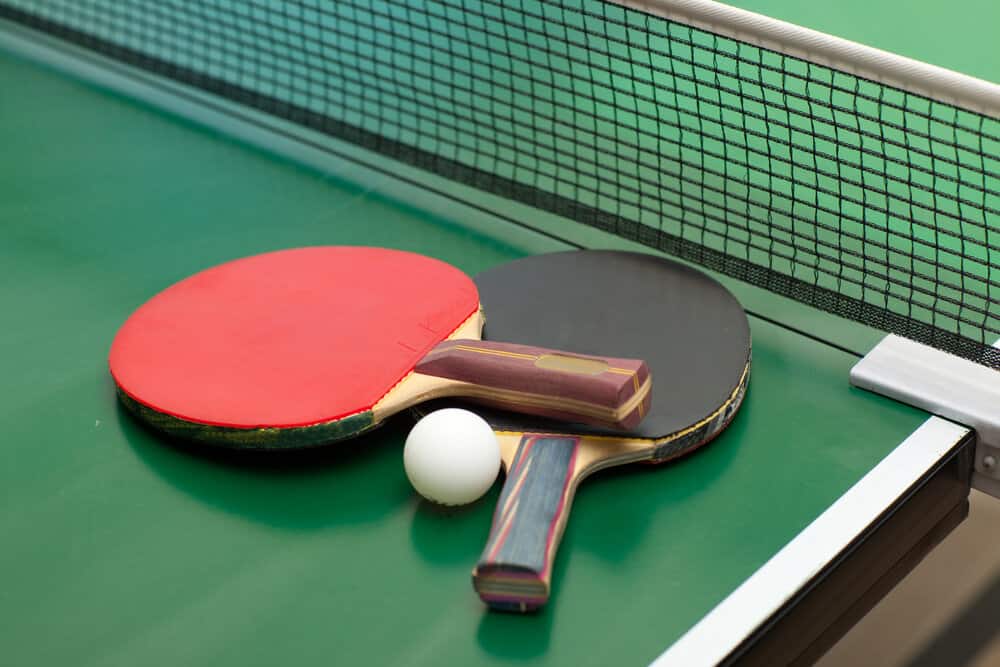 The phrase ping pong rules for dummies actually makes it sound like the rules for ping pong are complex when in fact, they’re not complicated at all. In reality, it’s probably the easiest racket sport to learn for any player regardless of age.

The 5 basic ping pong rules for dummies are:
1. The ball must be allowed to bounce before being hit
2. The ball can never bounce twice
3. The serve must bounce on each side of the net
4. Service “lets” are allowed when the ball hits the net and goes over
5. Each player serves twice and games are played to 11

In this article, I will walk you through the game’s basic rules, like the ones above and more, so you can get up to speed quickly and start playing. I’ll also cover some of the terms people use most often so you know the rules and know the lingo.

Hey, you have to walk the walk and talk the talk to right? Let’s get started.

What Is Ping Pong And Where Did It Come From?

Originating as an after-dinner game played in Victorian England, ping pong it is now popular worldwide, not least because it’s easy to learn and can be played in groups. But its not just a silly social game. In fact, ping pong became an Olympic sport in 1988, with single-player and double-player events for both men and women.

It’s actually got a few similarities to tennis too, which is why another name for ping pong is “table tennis.”

The 5 Basic Rules Of Ping Pong

Rule #1: The Ball Must Bounce Before Being Hit

The most unique aspect to ping pong is that its one of the only racket or paddle sports that actually eliminates the “volley” completely. This is where you hit the ball out of the air before it bounces.

In ping pong, this is NOT allowed. You must let the ball bounce before hitting it at all times.

This includes the serve, return of serve and any point of contact after that. There are no volleys in ping pong.

What happens if the ball bounces and hits the edge of the table?

Sometimes the ball will hit the very edge of the table, and can even bounce sideways. As long as it still hits the top surface of the table, it’s a legal hit, and you have to return it. Even if the ball goes flying off in a random direction, that’s a legal shot that must be returned.

Editor’s Note: This rule can take new players by surprise so I created this helpful guide on what types of shots to use when you’re letting the ball bounce in ping pong.

This is probably the most self explanatory rule of ping pong and one that you’d come to expect if you’ve ever played tennis. If the ball ever bounces twice, it is a fault and a point is awarded.

Here are a few examples.

And finally, if at any point during the rally, a player doesn’t get to the ball and return it over the net in time before it bounces twice, a fault has occurred and a point is awarded for the opposing player or players.

Rule #3: The Serve Must Bounce On Each Side Of The Net

To start a game of ping pong, one person “serves” the ball—that is, tosses it into the air, hits it so that the ball bounces once on their side of the net and then crosses over the net and onto their opponent’s side of the table.

You cannot toss it up and volley it directly over the net to the other side.

A legal serve in ping pong is one where your serve must bounce on your side, then cross the plane of the net without touching it and land on your opponent’s side.

This is called a let and I’ll talk about that in rule #4.

It’s also worth nothing that you can serve to any spot on your opponent’s side of the net. You don’t have to serve diagonally in ping pong.

Fun Fact: If the ball happens to hit your paddle hand while playing, that’s fine—as long as it still results in a legal hit, anyway.

In ping pong, when your serve hits the net but still goes over to your opponent’s side, play is stopped and the serve is replayed. This is called a “let” and there is no limit to the number of lets allowed as long as the serve makes it over the net.

Rememnber though, if the serve hits the net and lands back on your side of the net without making it over, the point is given to your opponent.

Rule #5: Each Player Serves Twice And Game Are Played To 11

Serving in ping pong is easy because each player gets two serves. After your two serves are up, your opponent serves twice.

Scoring is just as simple because a game of ping pong is over when a score of 11 is reached by one side.

Players take turns serving every two points and they alternate from there until on player reaches 11. But you have to win by at least two points, so things change if the score is tied at 10-10. During this sudden-death play, the players alternate serves every point, and whoever gets a two-point lead first – wins.

In doubles play, you and your partner each get one serve before it goes back to your opponents.

If playing two by two, or “doubles” ping pong, the two players on each team have to take turns returning the ball. A team will lose a point if one of them hit the ball two times in a row.

So, when playing doubles you must alternate who hits it and take turns. If the better player hits it twice, that’s a fault.

Another scenario to be aware of, and one that is very common in recreational tennis is when the ball is hit at the same player twice to force a this kind of fault. For example, say you return the ball over the net and your opponents hit the ball right back at you or to your off shoulder knowing full well that you’re not allowed to hit the ball.

In this scenario, you must get out of the way for your teammate to come across the table and get to the ball. For a stand sized ping pong table, this can be a challenging shot!

I’m a huge of the ping pong brand Joola, and they produce one of the best starter sets around. You get 4 paddles with quality rubber, 10 balls and a handy carrying case…all for under 30 bucks!

The Most Common Ways To Win Points In Ping Pong

Professional athletes in most sports use a common “ready stance:” a wide, low position with your knees bent and your feet placed about shoulder-width apart. Most pro table tennis players stand at an angle. Right-handed players keep their right foot farther back, and lefties their left foot farther back. This makes your forehand stroke stronger and more accurate.

Staying balanced and low makes it easier to see how the ball will bounce and helps you get into position more quickly. According to PongFit, a partner of USA Table Tennis, you need to keep your arms “relaxed but not limp.” Keeping them in front of your body helps with your balance. You should keep your dominant hand in the middle and be prepared for either a backhand or forehand stroke.

You can move around during the course of each game, but in between each strike, you should reset to that basic position!

Every sport has its own jargon or slang terms, and the best way to feel like a real player is to know those words. Here are some basic ping pong terms to help you sound like someone who knows what they’re doing.

Learning a new sport is always a challenge, but the great thing about ping pong is that nearly anyone can pick up a paddle and learn to play. All you need is a table, a net, two paddles, a ball, and a friend to play with.

And while the game is relatively easy to pick up and play, the rules are even easier.

The 5 most basic rules for ping pong are that the ball must bounce before being hit, the ball can’t bounce twice, the serve must bounce on each side, service “lets” are allowed, each player serve twice and the game is played to 11.

Whether it’s a party game or a fun family activity, ping pong is beloved the world over for a reason: it’s fun, and the rules are easy.