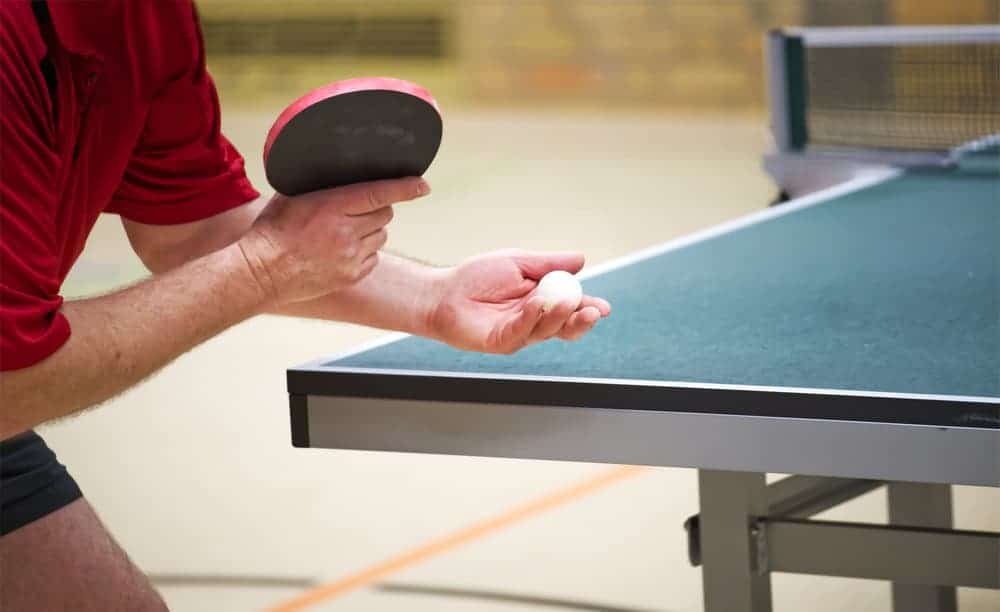 Can You Lose On A Serve In Ping Pong? Don’t Make These Mistakes

The are many reasons you might lose on a serve; for instance having two failed service attempts in a row. But there is more to it than that. This article explains all the ways you can lose on a serve in ping pong, as well as some tips on how to avoid beginner mistakes and win more points. If you’re interested in making fewer mistakes on your serves, winning more points, and improving your game, then keep reading.

Each player gets two attempts to serve the ball in ping pong. After two serves, whether you win two points off those two serves or none at all, the ball goes to your opponent for their two serve attempts. If the ball hits the net on any serve attempt but lands in, a let serve is allowed and the serve is re-done.

There is no limit to the number of lets allowed in ping pong as long as the serve still lands “in” after making contact with the net.

But losing a point directly on the serve is common. Quite common in fact – if you’re a beginner.

Your opponent scores a point when you make a fault on the serve, so make sure you’ve got proper form and technique and hit it in. However, these are just the basics when it comes to not losing on a serve in ping pong.

Losing On A Serve In Ping Pong

There are more than a few ways that you can lose on a serve, and almost all of them involve your technique. Your body position, aim, initial throw, and follow-through can all contribute to the success or failure of your serve.

Related: Click the link my ping pong rules for dummies guide. It’s a complete guide to the basic rules of ping pong for all beginners.

Now let’s get into the three most common ways you can lose on a serve in ping pong.

#1 Serving The Ball Into The Net

The #1 way a beginner can lose on a serve in ping pong is to serve the ball directly into the net accidentally. This happens a lot to new players still learning the mechanics of an effective serve.

As you become more familiar with serving you’ll naturally want to make your serve faster by hitting it harder and you’ll want to keep it low over the net. The first thing that usually happens to beginners when they attempt these two advanced techniques is that the ball never makes it over to the other side of the table and lands directly into the net.

Keeping your serve low is the ultimate goal. But if you’re constantly hitting the net, you’ll never give yourself a chance to win a point. Instead, you’re handing over points to your opponent without them having to put in any effort!

These are easy points for your opponent. So, find a balance between fast and low serves that you still have control over and consistently hit over the net.

#2 Serving The Ball Over The Table

I see this one with first-time players all the time. Sometimes, the ball is hit so hard on a serve that it makes it over the net but never lands on the other side of the net. This is usually a result of two things: the ball being too high at the point of contact, and too much power behind the swing.

This mistake can happen a lot when you make contact with the ball too high. This can also happen if the ball bounces on your side of the net too close to the net. You want your bounce to be back toward the edge of the table, not right by the net.

If it’s right by the net, the ball will come up too high and give your opponent an easy, high ball to attack but it also might be so high that it never lands on the other side.

The easy way to correct this error is to aim for the middle of the table so that the bounce on your side is closer to you. That way, even if you hit it harder, there is enough room for it land on the other side of the net but deep for your opponent.

This not only corrects the issue but also makes your serve harder to return with an aggressive shot. Which in turn sets you up for a put-away shot on the third hit.

#3 Not Letting The Ball Bounce First

When serving, the ball must bounce on your side of the table before going over the net. Sometimes, beginners will bounce the ball on the table then hit it out of the air directly over the net. This is technically an illegal serve.

For the serve to be “good” or legal, it must be struck out of the air then bounce on your side of the table and land on your opponent’s side before being returned back.

it’s common for beginners to serve and hit the ball directly over the net with no bounce on their side of the table first. This would result in a lost point for the server while rewarding the returner.

But that begs the question, what are the rules behind a legal serve in ping pong?

Since we’re talking about losing on a serve during a game of ping pong, let’s delve into the official rules for a moment. When you know what you can and cannot do during the serve, it will help you avoid missing or losing points right from the start.

According to the USA Table Tennis, the rules book states:

“Service shall start with the ball resting freely on the open palm
of the server’s stationary free hand. The server shall then project the ball near vertically upwards,
without imparting spin, so that it rises at least 16cm after leaving the
palm of the free hand and then falls without touching anything before
being struck. As the ball is falling the server shall strike it so that it
touches first his or her court and then touches directly the receiver’s
court; in doubles, the ball shall touch successively the right half court
of server and receiver.”

Let’s break this down into two simple steps so you better understand the components of a legal serve in ping pong:

A legal ping pong serve must be done with the ball resting on the open palm of the server’s hand and tossed up at least 6 inches without any spin on the toss. Then the ball is struck and must bounce on the server’s side, clear the net, and then bounce on the opponent’s side before being returned.

Losing On A Serve In Ping Pong As The Receiver

#1. Hitting the ball before it bounces on your side of the table. This is illegal because the serve must be allowed to bounce on the return side as well. If you’re the receiver and the ball is going to land on your side but you hit it out of the air first, you lose the point.

But remember, if the serve goes long and never lands on your side, it’s your point. But the rule is, the serve must be allowed to hit before being returned.

#2. Returning the ball into the net. Much like the server hitting it directly into the net, when the return man or woman returns the serve back but it falls into the net and never makes it over; this is a point for the server.

#3. Your return never lands on the opposite side. Again, much like serving, the ball must land on the other side of the table after being hit. So, if you’re returning the serve and hit it too far over the table and it never bounces, it’s a point for the serving team.

Simple Tips To Improve Your Serve

Once you’ve forced your opponent to have to hit up on the ball, you’ve slowed down their return shot, and given yourself an attackable ball for your next shot. Shots hit upward tend to slow down and are much easier to smash. That is the type of shot you want coming back at you after you’ve served.

So, how do you force your opponent to have to get under your serve and hit upward? It’s simple, make your serve as low as possible.

Many beginners will make contact with the ball too high during their serve. This actually creates an easy return for your opponent and one that they can attack. This is not ideal.

To avoid this, make contact with the ball as low as possible on your side of the net. When done correctly, the ball will bounce on your opponent’s side of the table and not come up very high after the bounce. If it bounces up no higher than the net, you’ve done it right!

Any lethal serve in ping pong is one that bounces on your opponent’s side but never reaches the height of the net. This forces your opponent to have to dive under the ball to get to it, and then pop it up over to you. From there, you’ve set yourself up for an aggressive putaway shot like a topspin forehand.

In summary, a good serve in ping pong should:
1. Be as low as possible
2. Bounce no higher than the net on your opponent’s side
3. Force your opponent to have to hit up on the ball

Other Tips – Perfect Your Grip

The most straightforward and commonly used grip, primarily when serving, is the “shakehand grip.” Make sure not to grip too tightly as you wrap your three fingers around the base of the racket and extend your thumb and index finger on either side of the racket.

The racket should loosely be laying between your index finger and thumb with your three fingers offering support on the base.

This style grip gives you balance and control when it comes to your serve. While there are other grips you could employ, keeping it simple when serving is most important.

Other Tips – Optimize Your Stance for Power Play

A good stance will put you in the position to make a power play. Try standing with your feet shoulder-width apart, slightly crouch down and lean slightly forward.

This position not only keeps you balanced as you serve but will also allow you to adjust and move in a way that prepares you to receive the ball when your opponent returns it.

A good stance, first and foremost, sets you up to quickly adjust to the type of stroke you want to make.

Can You Lose On A Serve In Ping Pong – Final Thoughts

Whether you’re just hitting the ball back and forth with a friend or playing in a competition, it’s important to remember that your serve is perhaps the most vital part of the game. You can win or lose on the serve. It’s that simple.

So taking the time to learn the basics and the necessary technique on a serve is critical. This will not only allow you to avoid the mistakes that lead to losing a point on your serve but more importantly, maximize its impact and allow you to win more points because of your serve.

But these techniques take time, if you’re brand new or just play recreationally, be patient and practice. You’re one step closer to improving your game.