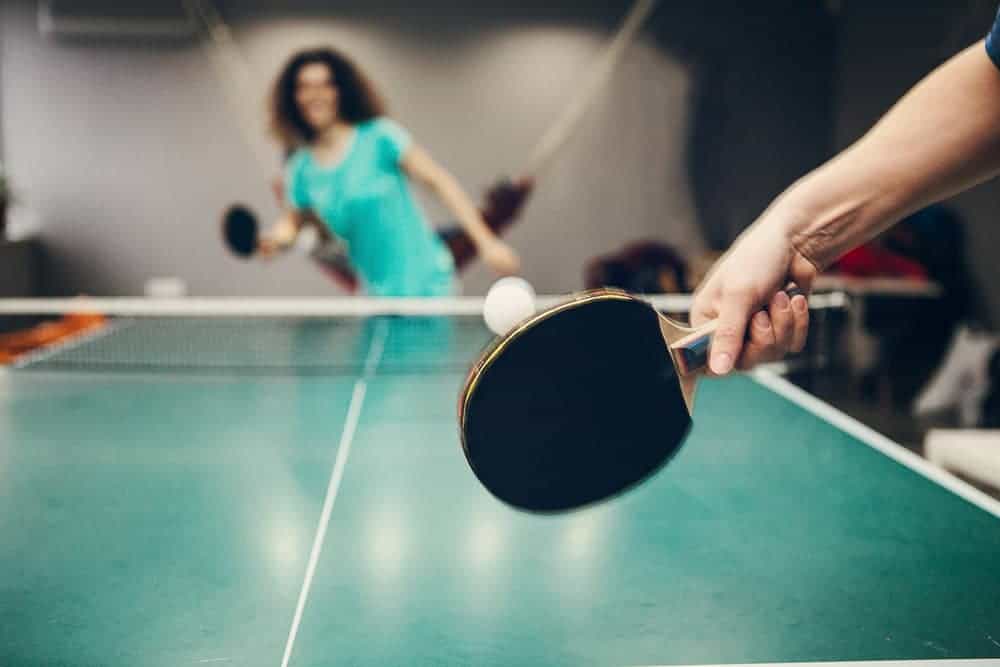 Does The Ball Have To Bounce In Ping Pong?

Yes, the ball does have to bounce in a ping pong. From the serve to the rally, the ball needs to continue to bounce after every shot. Hitting the ball on your side of the net before letting it bounce is illegal in ping pong and results in a lost point.

Throughout the rest of this post, I’ll detail the most common types of shots but more importantly the type of bounce they have. In addition, I’ll cover some of the other basic rules a beginner would need to know. I’ll also throw in a few tips to help you win more games even if you just started ping pong.

Types Of Ping Pong Shots With The Most Bounce

Playing a game of ping pong does not just consist of aimlessly hitting a ball back and forth. It takes a lot more finesse and more importantly, technique. The more advanced you get, the more you’ll want to hit advanced shots like a “topspin flick.”

To outplay your opponent and keep that ball bouncing, you need to know a few basic ways to hit the ball with a bit of purpose in mind.

Let’s start with the most common shot – the forehand.

The forehand drive is probably the most common shot in ping pong, especially by new players. It is also one of the most basic shots in ping pong. This shot feels the most natural and is performed with the palm of your hand, holding the paddle, facing your opponent, and on the right side of your elbow if you are right-handed.

The paddle should be angled slightly downward and pushing upwards. Forehand shots are used aggressively and are great when the ball is coming towards you a little on the high side.

How To Stand For A Forehand Shot

You can prepare for this shot by standing near the table with your legs a little wider than your shoulders, bending your knees, putting your weight on the balls of your feet, and positioning your right foot slightly further back if you are playing with your right hand. And visa versa if you are left-handed. Position your hips angled slightly sideways from the table.

The backhand drive is another basic stroke that I’d use during a decent game of ping pong. This stroke is performed by hitting the ball in front of your body, around chest height.

The back of your hand should face towards your opponent and be to the left of your elbow if you are right-handed. The paddle should be angled slightly downward, and the push should be horizontal.

These are attacking strokes and are sometimes shorter. It would be best to use these when the returned ball is high. They are challenging shots for your opponent to return and will no doubt earn you some points. Especially if their shots are too high.

How To Stand For A Backhand Shot In Ping Pong

Just like with the forehand drive, you can prepare for this shot by standing close to the table with your legs a little wider than your shoulder width, knees bent, and with your right foot slightly further back if you are right-handed. Position yourself directly facing the table without angling away.

The forehand push is another basic shot that beginners should learn, but I find it the most challenging out of the four strokes discussed in this article. Why? Because it requires a level of touch that takes time to master and can be difficult for beginners.

Like the forehand drive, you should play this stroke on the side of your body. The palm of your hand should face your opponent and be to the right of your elbow. It can be played with your palm facing away, although this is rare.

Unlike with both the forehand drive and backhand drive, you should keep the striking side of your paddle angled slightly upward so that the paddle can travel under the ball. The push should be horizontal.

These are controlled and defensive strokes that you can use when you are not in the correct position to do an attacking stroke. These strokes can undoubtedly change the pace of the rally and will hopefully catch your opponent off-guard, preventing them from responding with an aggressive attack of their own.

Where To Stand For A Forehand Push

You can prepare for this shot the same way as the previous strokes with your knees shoulder width apart and slightly bent. However, this stroke needs a small gap between your elbow and hip. And more importantly, if you’re right-handed, stand with your left foot slightly ahead of your right to get the angle correct.

If you’re left-handed, just reverse the stance of your feet.

In my opinion, the backhand push is the easiest of the four strokes I’ve outlined because it feels the most natural even to a new player. You can perform these the same way as the backhand drive, with the stroke taking place in front of your stomach and using little movement from your body.

The paddle should be angled upward, hitting the ball underneath, and the push should be horizontal.

This can be both an offensive shot or a defensive shot depending on how aggressive you want to get. From an offensive perspective, you can get aggressive by adding a lot of backspin or side spin. It can also be defensive as a means to slow down your opponent’s shot and rebound it back over to them.

Where To Stand For A Backhand Push

Once again, you can prepare for this shot the same way as the previous strokes. However, with this stroke, remember to keep your hips facing the table and bend your knees a little more than with the other strokes.

Common Ping Pong Rules And A Few Lesser Known Ones

We now know that the ball must bounce during a ping pong game, whether playing singles or doubles. Let’s take a look at a few other fundamental rules.

Click the link for a more comprehensive, but beginner-friendly breakdown of the 5 basic ping pong rules for dummies.

Games Are to 11 Points

You (or you and your partner) need to be the first to reach 11 points to win the game. If the game were tied (10:10), the player/s who get two points ahead would win the game. A match is the best out of any odd number of games.

To serve correctly, you are required to stand behind the end line of the table. The server then needs to hold the ball with an open palm to keep the ball visible, throw it in the air, and hit it on its way down.

Although you may not touch the table with your free hand, you may do so with your paddle hand. Just remember that if you bump the table during a rally and it moves, a point goes to your opponent.

There are many ways to lose points. A few of them are due to

The goal of ping pong is to keep the ball bouncing back and forth longer than your opponent can. Here are a few quick tips to keep you going.

If you have been playing ping pong at a friend’s house or your local gym and are interested in buying your own table and paddle set, I recommend this table from Joola Inside and the Sportsfit Ping Pong Set from Amazon.com to get you set up and playing in no time.

In conclusion, keeping the ball bouncing throughout a rally is the foundation of a game of ping pong. Although rules may be frustrating at first, they will come quickly to you once you start implementing them, and the same goes for the various types of strokes mentioned above.

Keep at it, and you will become the best ping pong player amongst your friends!