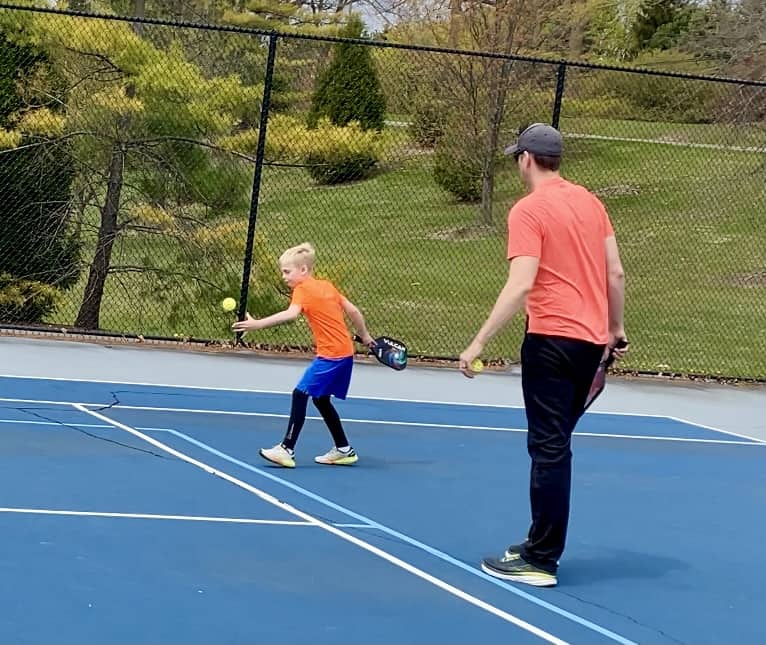 If you're like me and have found that you have a passion for pickleball, you're not alone. The USA boasted 4.2 million players in 2020, and that figure is growing exponentially. But what do you do if you have nowhere to play; can you use a tennis court to play pickleball?

You can play pickleball on a tennis court using permanent or temporary markers, tapes, chalk, or paint if the tennis court management permits. An average tennis court can provide enough space for four pickleball courts, or you can easily adapt to one or two courts with careful measurements.

If your neighborhood has not provided you with proper pickleball facilities, you may adapt your local tennis courts to your purpose, but with permission. Please read on if you want to know how to create your own pickleball court out of an existing tennis court.

How To Play Pickleball On A Tennis Court

The basic rules of pickleball apply whether you're playing on a converted tennis court or a dedicated pickleball court.  Either way the game, its rules, and how points are scored are the same.

This can be confusing but here's what you need to know about playing pickleball on tennis court:

Let me walk you through each line when playing pickleball on a tennis court.

-The Service Lines-
Let's start with the service lines and use the picture below as a reference.  The blue lines are highlighting the pickleball court.  You can easily see that where you serve from in pickleball is much closer to the net than in tennis. 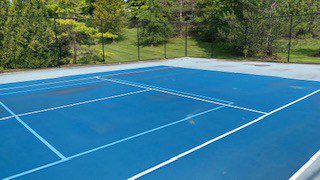 When playing pickleball on a tennis court, you'll never need to be back by the tennis service lines.  So you can ignore this part of the court.

The serving quadrants for both pickleball and tennis look similar and the rules are the same...you serve diagonally to your opponent and alternate sides as the server wins points.

Because the service lines are nowhere near each other, these lines are easy to tell apart and don't interfere much at all.  The only confusing part from a pickleball perspective is that right in front of the pickleball service line, you'll see the white line signifying the boundary of the serving quadrant in tennis.

Even though this is right by the serving line for pickleball (it's literally just a few inches in front of it), it's a white line meaning its tennis related and will mean nothing during a pickleball game.

Now let's discuss the sidelines because those can be a little harder to differentiate.

-The Side Lines-
The lines that run along the side of each court are called the sidelines and represent the most common "out of bounds" lines from left or right.

But, when playing pickleball on a tennis court, you'll actually see three distinct lines like the image below shows.

You can see the tennis net crosses over all three lines but when playing pickleball, you only need to worry about the inner most lines on the court.  In this case, it's the blue line representing the pickleball court laid on top of the tennis court.

-The No-Volley Zone aka "The Kitchen Line"-
The last line worth mentioning when playing pickleball on an existing tennis court is the kitchen line.  This line is only found on a pickleball court and represents the area on the pickleball court that does NOT allow volleys.

In order to enter this part of the court, you must hit ground strokes only. Meaning the ball must bounce in the no-volley zone in order for you to step into this area of the court and hit the ball. 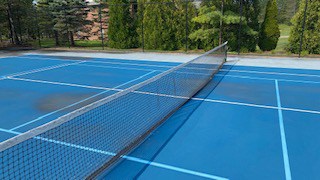 Look at the picture above.  The blue line that is seven feet from each side of the net is the kitchen line.  Another 15 feet back is the pickleball service line.

The white line running down the center is the service quadrant line used for both sports but any other white line is a tennis only indicator line.  So, when playing pickleball, just disregard them.

Once you've learned how to differentiate the tennis court lines from the smaller pickleball court lines and mentally disregard them, playing pickeball on a tennis court will become second nature.

How To Easily Convert A Tennis Court To A Pickleball Court 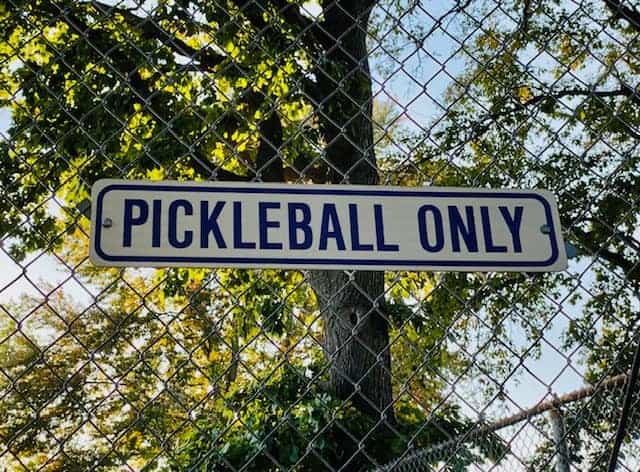 What if you're trying to convert a single tennis court and add-in a single pickleball court to it, for dual functionality?

Luckily, it's not that hard.  As long as you have all the materials.

When you have all the above materials, you simply use your tape measure and tape down the proper dimensions.  After that, all that's left is to lower the center of the tennis net to the recommended net height for pickleball - which is 34 inches.

To make this whole process as easy as possible I have a few recommendations.

I recommend using this adhesive tape while using your tape measure to outline the 20 foot by 44 foot pickleball court and it's centerline, and kitchen lines.

To make an even more accurate pickleball court on top a tennis court, using a court marker kit can be a good idea. Like this one from Franklin Sports.  Using the kit along with the adhesive tape is a great way to make sure lines are more visible and the proper dimensions.

If you're willing to pay a premium to get the most complete line set you'll ever need, you may want to check this one out as well.

From there, a net adjust is an added plus.  But if you're playing just recreationally for fun, you may choose to forego this step.

For a more complete step by step guide on using temporary pickleball court lines, I created this guide here.

The process I just outlined only speaks to the idea of adding temporary tape or lines to an existing tennis court.  What if you're trying to permanently paint pickleball lines down on a tennis court so that the court can be used for both sports; forever?

If that's, the case I recommend reading my helpful step by step guide.  I created this step by step walk through on painting pickleball lines on a tennis court as a stand alone resource.  I totally recommend it if you're in that scenario. 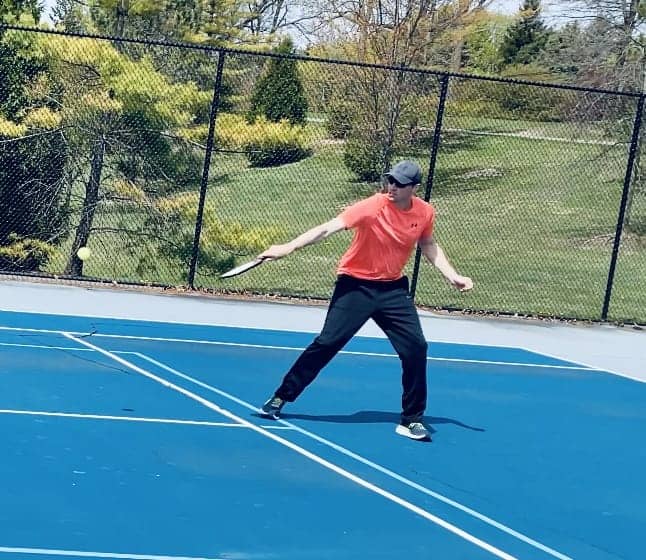 What Is The Cost To Converting A Tennis Court To A Pickleball Court?

So, if you're demolishing one tennis court and resurfacing two brand new pickleball courts, you're looking at a cost somewhere in the neighborhood of $42k to $50k.

However, neighborhood tennis courts, like the one I have in my neighborhood are doing it a little differently...and cheaper.

If you're not resurfacing and just want to paint lines, it'll cost $561 for a professional grade paint line kit and a few thousand dollars depending on the contractor for the labor.

But labor costs are doing to depend a lot based on your area so it could be even cheaper than I'm estimating.

Again for more into, I suggest reading my complete "How To" guide on painting pickleball lines on a tennis court.

The absolute cheapest way to add pickleball lines to a tennis court is to just do it yourself with a temporary pickleball line kit, or tape like I outlined above.

Temporary line kits and tape are an easy, court friendly way to convert a tennis court and it's net into a pickleball court for the afternoon.  Then you simply unpeel the lines, roll them back up and you're done. 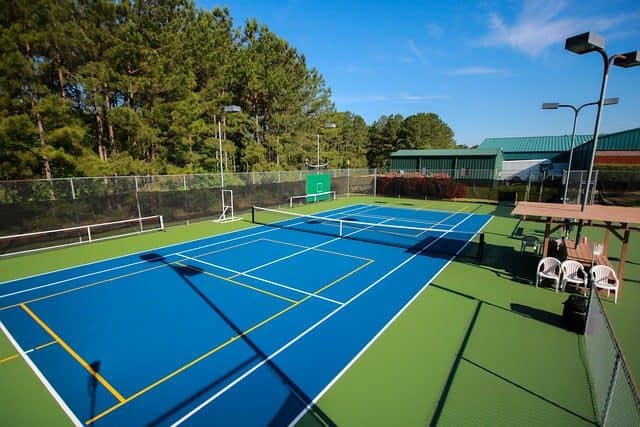 You may not realize tennis nets are actually raised higher than a picjkleball net but, I outline all the facts here.

Aside from those two fundamental differences, it is worth noting again some of the lines on a pickleball court are different than the lines on a tennis court.

Again, the difference in size dictates that the baselines or service lines of each court are vastly different.  A pickleball baseline is 20 feet wide while a tennis baseline is 36 feet wide.

The no-volley zone or "kitchen" as its called in pickleball is an area on a pickleball court that requires you to hit groundstrokes only.  Pickleball is the only mainstream racket or paddle sport with a spot on the court that dictates the type of stroke that is allowed.

Playing pickleball on a tennis court does not damage the tennis court. The wiffle balls used for pickleball will do no harm. The chief concern is more general wear and tear due to more use. The more a tennis court is used, the more the lines will fade and the court surface will fade in high-use areas.

When it comes to equipment used for pickleball like paddles, the plastic balls and the shoes, none of them will do more harm than tennis equipment.

Pickleball paddles, if dropped, pose even less risk of chipping the court than a tennis racket because they're lighter and made from things like graphite or composite materials.

Pickleball balls, although not soft like a tennis ball, are made for both indoor or outdoor courts and are designed with a specific plastic to make them durable but also scratch free. Click here to learn more about what a pickleball is actually made of.

As for the shoes, court shoes are the type of shoes used for both sports so there really is no difference. Any good pair of court shoes for tennis are inherently great for pickleball as well because the court surfaces, especially out doors, are the same.

I created this helpful buyers guide on my favorite pickleball shoes after trying and using over a dozen pairs.

Can You Play Pickleball On A Tennis Court - Final Thoughts

Checking to see if there are a separate set of lines (in a different color) within the boundaries of a tennis court is an easy way to know if you can play pickleball at your local tennis court.

Depending on where you live, playing pickleball on a tennis court may actually be the easiest and closest spot to play pickleball.