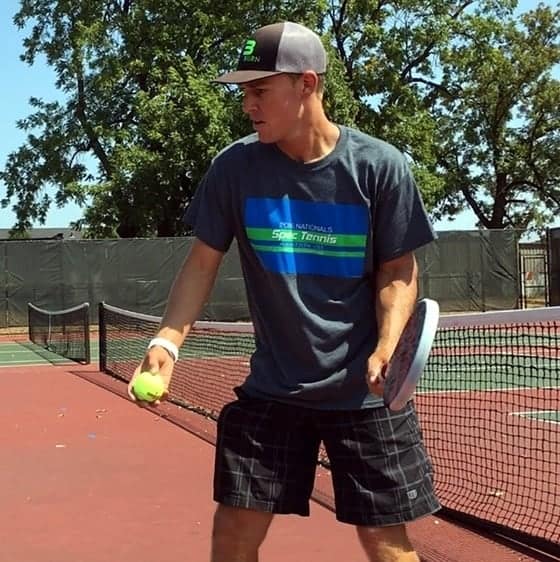 What is Spec Tennis And Why Are Younger Players Preferring It?

A while back, I began to look into and learn more about other paddle or racquet sports (aside from pickleball) being played on a smaller court.  Ironically, it was at this time that I got an email from Nate Gross wondering if he could tell me about the new sport he had come up with called Spec Tennis.  It’s not often that I get email from folks that have invented entirely unique paddle sports so, needless to say, I had to hear him out. What I learned was incredible….

So what exactly is Spec Tennis?  It’s a new paddle sport played on a pickleball court where the rules of the “no volley zone” are NOT enforced.  This creates a more fast paced game that feels and plays a lot more like tennis. Spec Tennis is played with a platform tennis racquet for better ball control and uses a 50% less compression “orange dot” tennis ball.  It sounds strange but trust me when I say it’s all a match made in heaven for racquet sport fanatics.

To get more details on Spec Tennis, I decided to interview the game’s founder Nate Gross.

The goal of this article is to give you all the information on Spec Tennis, through an informal Q&A interview with Nate.  From “how to play” to “how did Spec Tennis get its name” we cover it all! 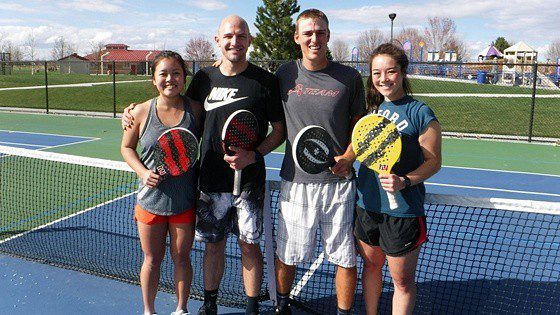 Nate Gross is currently a full-time tennis teaching professional in northern California.  He played Division 1 college tennis and, like most of us, has played pickleball.

I asked Nate - Where did you get the idea for Spec Tennis?  How did it come about?

“I played paddle tennis (aka Pop Tennis) a bit growing up in Venice Beach, CA when I was growing up. It’s fun, but there aren’t that many courts around because the 50 foot court size is very specialized.”

Editor's Note: Based on where you might live in California, there are actually a few hunderd Pop Tennis and Pickleball courts.  Nationally we've seen many new Pickleball and Pop Tennis courts pop up each year.  Nowadays, finding a court for either sport, is getting way easier!

“I saw some pickleball courts go in at some public tennis courts and I decided to try playing paddle tennis on those. The pickleball court was too small for that and the ball was too fast, so I started experimenting with different balls and paddles, and eventually came up with the best combination of all. I then developed the rules and scoring system.”

“Platform tennis (popular on the east coast) is a lot of fun, but again the courts are very specialized and very expensive to build.”

“Pop Tennis is a rebranding effort of paddle tennis and is played on a 60 foot court with a green dot tennis ball and a more powerful paddle. It’s also fun, but the rallies are shorter than in Spec because the court is bigger and the ball is faster.”

I wrote a complete breakdown on what Pop Tennis is and how Platform Tennis is different.  I highly suggest you click on those two articles to get a better idea as to how all these sports are similar and different.

"The green dot ball is too fast to be used on a pickleball court. It’s used on the 50 and 60 foot courts in Pop Tennis. The net is also lower in Pop Tennis than in Spec Tennis, so a faster ball works fine.

The Orange Dot ball is great for everyone from kids and seniors to the highest level players because, it’s easier to control.  If someone has good technique they can really let loose and rip it and still keep it in the court." 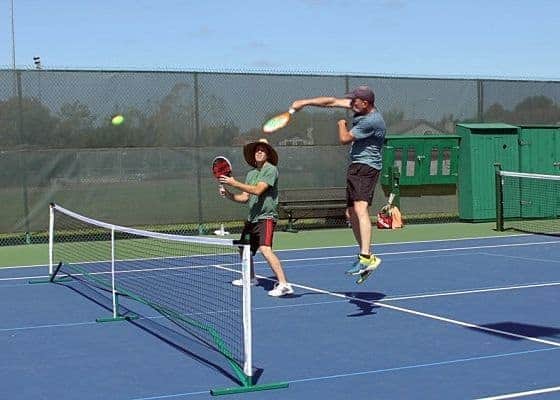 So, Spec Tennis is the amalgamation of four sports into one. It takes the best elements from Tennis, west coast Pop Tennis, east coast Platform Tennis and Pickleball.

Well trust me when I say, if you’re not a fan of the no volley zone,  or you wish pickleball played more like tennis and had a faster pace - then Spec Tennis was made for you.

What Are the Rules?

The rules of Spec Tennis are similar to other paddle sports but also completely different.  To help me get a better idea of the similarities and differences, I asked Nate to explain how Spec Tennis differs from pickleball, even though it shares the same court.  He said:

“Most importantly, there is no two bounce rule—meaning that the server can serve and can go right to the net to volley.”

“Keep in mind, in Spec Tennis Tournament play, there is a ‘service’ mark 4 feet behind the intersection of the baseline and sideline. The server must have one foot on the mark when they serve. This makes it harder to ‘serve and volley’ because they won’t be able to get as close to the net for their first volley, as they would have if they served from just behind the baseline.”

“Also, Spec Tennis does not observe the No Volley Zone rule that pickleball does when it comes to net play.”

How Is Serving Different? 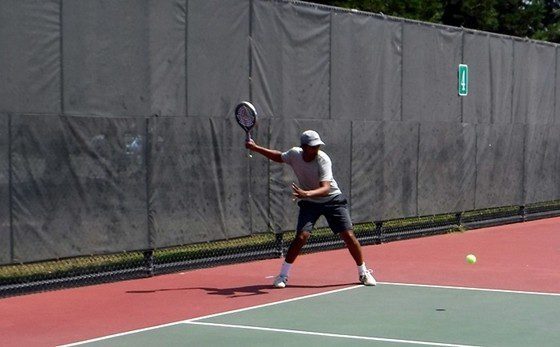 Serving in Spec Tennis is similar to pickleball in that you get one underhand serve that must land cross court and beyond the kitchen line.

So, in that respect the no volley zone line is at least acknowledged but only during serves.

Unlike pickleball, you CAN bounce serve it.  Or you can hit it out of your hand if you’d like.  In Spec Tennis, it’s whatever feels more comfortable.

Is Spec Tennis Hard To Adjust To? 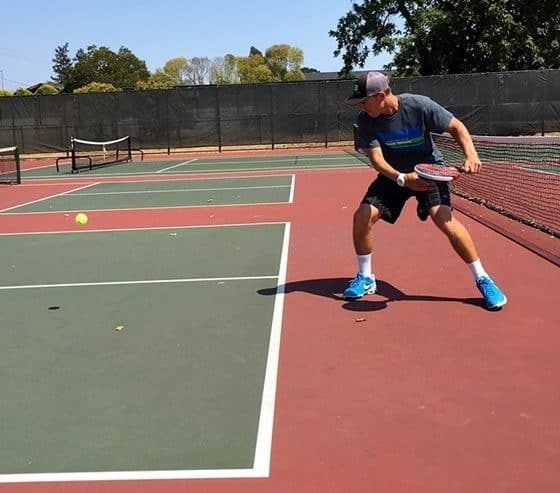 I asked Nate to give folks coming from pickleball some advice.  I wanted to know what the biggest potential adjustment pickleballers might need to make when trying Spec Tennis for the first time.  He said:

“The weight of the paddle, when compared to a pickleball paddle is heavier, so be prepared for a different feel.  I tell my players that I coach, that having a heavier paddle actually promotes better biomechanics and leads to less injuries.”

“Because the paddle isn’t very powerful, you won’t have success swinging with just your arm, so it forces players to turn their shoulders and use their legs on their swing.  It helps build proper swing technique - which is always a good thing.”

Why is the No Volley Zone Rule not enforced in Spec Tennis?  Well, Nate told me it’s not enforced for three main reasons.

How To Play Spec Tennis And The Strategy Involved

As I began to learn more about Spec Tennis from Nate, I realized that it has a strategy all it’s own.

While it borrows concepts from all the sports it is similar to, Spec Tennis has a unique feel to it.

When I asked Nate about Spec Tennis strategy he explained to me that in Tennis you see some very aggressive player styles that go for outright winners anywhere on the court.

But Spec Tennis is different.

In Spec Tennis, Nate says that approach doesn’t work as consistently.  When playing Spec, players have to to take on the role of what he calls an “all court player” and play from the baseline to the net.

Good defense, especially when at the net is also very important.  Again, that’s something that tennis isn’t requiring right now with so much of the game being played deep at the baseline. 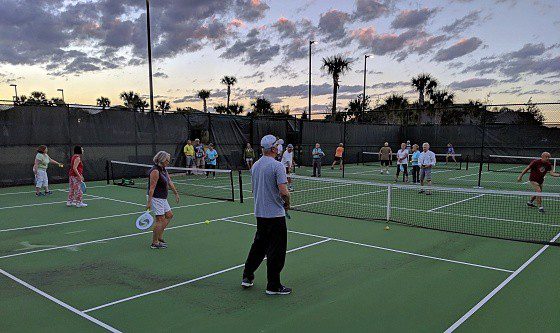 When I asked Nate to compare Spec Tennis strategy to Pickleball here’s what he said:

“Comparing it to pickleball, because of the No Volley Zone, staying back at the baseline against two players who are at the net doesn’t work in pickleball because the net player simply needs to volley it or dink it into your kitchen and because the ball doesn’t bounce much, it will be nearly impossible to get. This results in one main strategy which is to work your way up to the kitchen.”

Nate went on to say:

“In Spec Tennis, you’ll see some players serve & volley, others will play mainly from the baseline, and some will do a combination of both.”

This is what really spiked my interest in Spec Tennis.  Let me tell you why:

I’ll be honest.  I can struggle with accuracy and consistency at the net during pickleball.  But the game’s kitchen line basically demands that that be your strategy.

To me, that’s too much of a one sided strategy.  I love how Spec Tennis offers a more well rounded mix of strategy concepts.  And one that feels more like tennis.

As I said before, this is one of main reasons why young players are gravitating towards Spec Tennis.

If all of this sounds appealing to you, then I encourage you to give Spec Tennis a try.  Spec Tennis takes some of the best aspects of various paddle or racquet sports and does a really good job at playing to each sport’s strengths.

Special thanks to Nate Gross for chatting with me and letting me ask all these questions!  Nate, you’ve got a winner in Spec Tennis! I really look forward to tracking your unique game’s growth over the years to come.

If you’ve got a question or some feedback for Nate, leave is a comment below.

Check out Nate Gross at www.spectennis.com or at his YouTube Channel here:

What Are Illegal Ping Pong Serves?