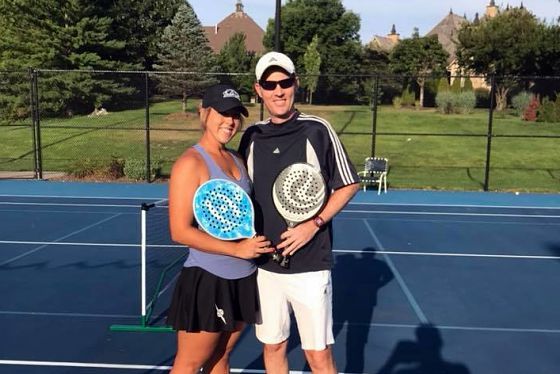 Spec Tennis Paddles – Analysis and Direction From The Game’s Inventor

I recently did an interview with Nate Gross, the inventor of Spec Tennis, to get the low down on the game and what makes it so unique.  You can read the interview here.  Since then, he and I have been talking about the equipment used in Spec Tennis...more specifically Spec Tennis Paddles.  To get a better feel for how to choose a Spec Tennis paddle, he sent me some to demo paddles!

After demoing some paddles, I decided to write a comprehensive article covering everything you need to know about Spec Tennis Paddles with help from Nate, the man behind the game itself.  The goal here is help point new players in the right direction and choose the best Spec Tennis paddle based on your own skill level.

What are Spec Tennis Paddles?  Well, the short answer is simple.  They’re actually the sample paddles used in Platform Tennis!  So, we’ve already got well known manufacturers in place like Viking and Harrow!  Why are Spec Tennis paddles the same racquets used in a different sport? Well, Nate told me it’s because the ball used in Spec Tennis is heavier, so a heavier paddle is required.  Spec Tennis Paddles like the Viking Ozone series or the Harrow Eclipse are perfectly balanced and are the ideal weight to play with a heavier Orange Dot tennis ball. 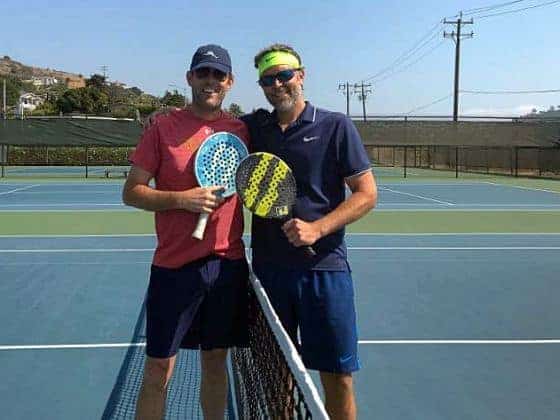 Facts About Spec Paddles vs Other Paddles Used In Other Sports

Paddles for Spec Tennis are larger, heavier and have a bigger racquet head than paddles used for other sports (namely Pickleball).  Why does this matter?

Well, with a larger racquet head and more weight in the paddle overall, you’ll get more racquet head speed.  This simply means the head of paddle is traveling at a much higher rate of speed than smaller paddles. More head speed means more speed on the ball.

Also, because the hitting surface is larger, you have more opportunity to put spin on the ball.  The larger the paddle, the more speed you’ll generate and the more spin you can produce.  It’s that simple.

Think about it.  Tennis racquets are bigger and heavier than any kind of “paddle.”  That’s why Tennis has more speed and spin incorporated into the game.

Compare that to a pickleball paddle.  It’s much smaller, and lighter.  Less speed, less spin.

Spec Tennis paddles rest somewhere in between those two sports.  It’s a great middle ground and a big reason why younger players (or tennis enthusiasts) might choose Spec Tennis over other paddle sports.

For reference purposes, one of the heavier paddles used in Spec (and Platform Tennis) is the Viking OZ Pro GG.  It weighs 390 grams or 13.8 ounces. A heavy pickleball paddle would come in around 8.5 ounces. That’s a big difference. 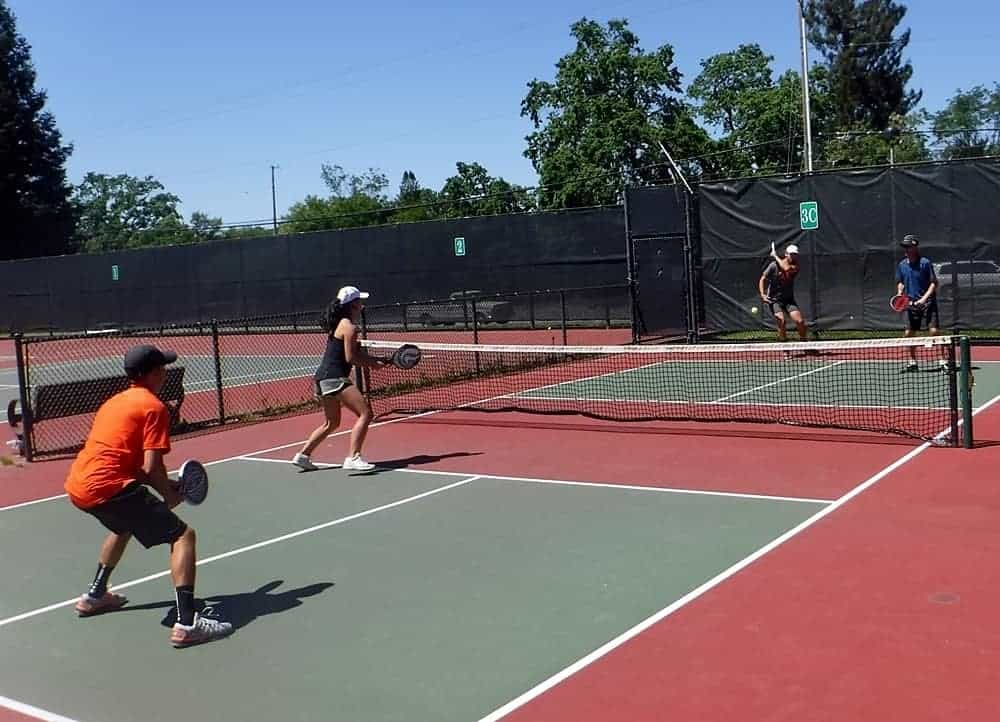 Spec Tennis Paddles - What Brands Should I Consider?

When it comes to choosing the best Spec Tennis paddle, a number of questions come to mind.

How to choose one?  Because Spec Tennis uses paddles from a completely different sport is it as simple as buying any decent platform tennis paddle?  Do higher priced paddles perform better for Spec Tennis?

These are all legit questions.  And they’re not easily answered.  So, that’s why I went right to the man who invented Spec Tennis - Nate Gross - to get real answers.

When I asked Nate these questions, his opinion and responses were refreshingly simple.

When it comes to choosing the right Spec Tennis paddle (i.e. platform tennis paddle) the brands he uses and recommends are Wilson, Harrow and Viking.

Can you play with other brands?  Sure, technically you could try any platform tennis paddle and play Spec Tennis just fine with them.  But, for the best performance - quality paddles from the three brands above are the best way to get the most enjoyment.

We'll get into the best Spec Tennis paddles in a minute, but there is something unique about these paddles that got my attention... 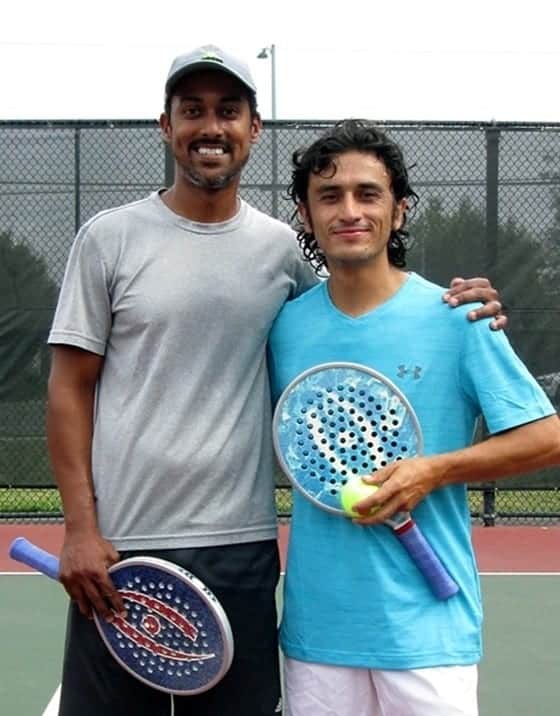 Paddle Core Density - What Does It Mean?

When researching Spec Tennis paddles, I got a little hung up on a statistic I kept reading about.  Every paddle I read about had a “Core Density” measurement.

What did this mean?

Well the more I researched, the more I found nothing.  It’s not really explained that well. But it’s something every paddle is measured on so it must be important…

So, I decided to email the experts.  The friendly folks at Viking Athletics were more than happy to lend a hand and drop some knowledge.

Put your tennis hat on for a minute and this will make A LOT more sense.

Core denisty, as you’ll see it listed, is basically the same as string tension on a tennis racquet.

When the string bed on a tennis racquet is tight or high, the ball will not come off of it as aggressive.  There is less power and more control. This is the equivalent to a high density paddle core.

Conversely, when a tennis racquet has a low tension string pattern, it will produce way more power (i.e. a trampoline effect).  So, a low density paddle core has the same effect. A low density core allows the paddle to have some give, and almost grab and hold the ball in a way, then send it back.  It’s ideal for newer player. 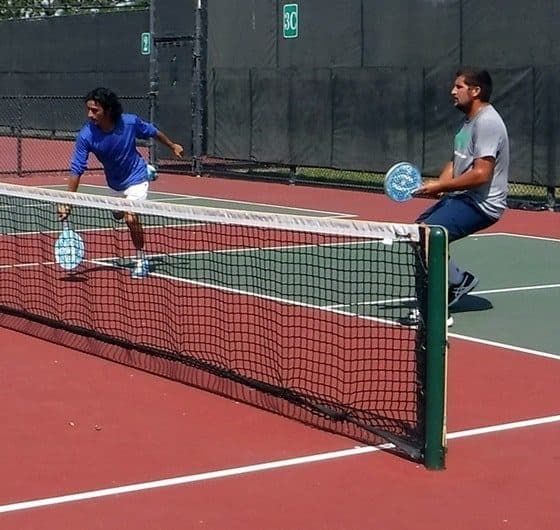 So, if you’re new to Spec, what are some good paddles to consider.  Well, after speaking with Nate, there are a few factors to consider.

The first factor is the weight of the paddle.  The general rule of thumb here for beginner players is - the lighter the better.

Another key feature is that the paddle face has been customized with a gritty surface area to allow spin and ball control.  It also has a bumper guard towards the top of the head for increased durability.

Really, the only downside to this paddle is the price.  It’s a fantastic beginner paddle for Spec Tennis and it’s one that Nate Gross recommends.  But, it retails well over $100.  Quality comes at a price, but it’s worth it.

The Viking OZ Lite GG is another option to consider.  It’s slightly cheaper than the Harrow Eclipse Lite but is also a little heavier at 360 grams (12.6 ounces).

Viking is a premier paddle manufacturer and the OZ Lite GG is their flagship beginner paddle.  Viking makes three series of paddles; all designed for different skill levels and kinds of players.

The OZ series is their one paddle lineup geared towards providing a bigger sweet spot and more power; all while adding control and stability.  It's sort of the best of both worlds.

It incorporates a great blend of lightweight design for maneuverability but also a slightly denser paddle core (for better control) and a mid head size for more powerful forehands and backhands.

This is ideal for newer players and the OZ Lite GG is a beautiful paddle to play with if your just starting out.

What if you're an experienced tennis player or maybe even an advanced pickleball player...what are some good Spec Tennis paddles for those players?

I asked Nate Gross, again the founder of Spec Tennis and he immediately recommended two paddles that he really likes.

The first is the Harrow Eclipse Pro.  This is Harrow’s signature paddle for experienced players and one that Pros gravitate towards.  Let me tell you why.

The Eclipse Pro has two fundamental attributes that will benefit a more seasoned player, and they got hand in hand to deliver outstanding feel and performance.

The first is the weight.  It’s hefty 385 grams (or 13.5 ounces).  That paddle weight is going to create some serious paddle head speed.

But the head speed this paddle generates is refined, controlled and natural thanks to what Harrow calls their exclusive “Power-Zone Technology”.  Without getting too technical here, this is a design feature that purposefully puts more weight into the head of the paddle to create controlled head speed through the ball on impact.

Add a bumper guard for durability and medium core density and you’ve got one hell of a pro paddle in your hands.  Again, quality comes at a price though. This is a premium paddle with a upper tier price tag tied to it.

Again, Viking Athletics has three series of paddles: The Ozone series, the OZ series and the Re-Ignite Series.  Their Ozone series however, is their premier, flagship series designed and tailored towards experienced paddle sport players; specifically those coming from tennis.

There are many paddles to choose from within the Ozone Series, and they will all make good choices but I settled in on the Ozone Pro GG because of it’s balanced 375 gram weight (13.2 ounces).

Now, this paddle also comes in a “Lite” model as well which is 10 grams lighter than the Pro version but more experienced players will like the added weight for better club head speed.

What I like best about this paddle though is it’s exclusive longer handle.  This was tailor made for tennis players and allows for that popular two-handed backhand we see and love in tennis!  I love that!

In addition, the Ozone Pro GG offers a mid core density for a specific balance between power and control.

The head of the paddle is a little smaller than some other paddles, so keep that in mind.  Again though, more experienced players will adjust quickly to this and like the added control and feel that it provides. 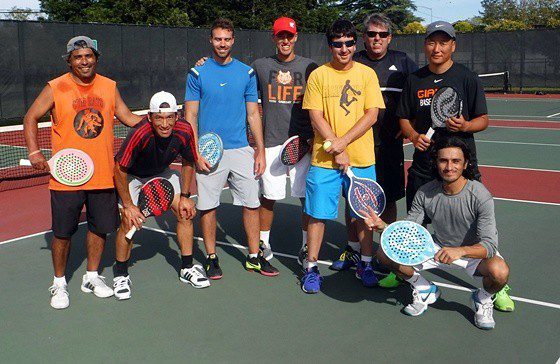 I want to send a big special thank you to Nate Gross and the friendly folks at Viking Athletics for adding value to this article!

Spec Tennis is a unique, new sport and is one that looks and feels a lot more like tennis.  A big reason for this, is because of the paddle Spec Tennis uses. Using another sport’s racquet is a brilliant ideas because it gives players a well established, big market of quality paddles to choose from right out of the gate.

If you have any feedback for us, or a question for Nate Gross, please leave a comment in the comments section below!