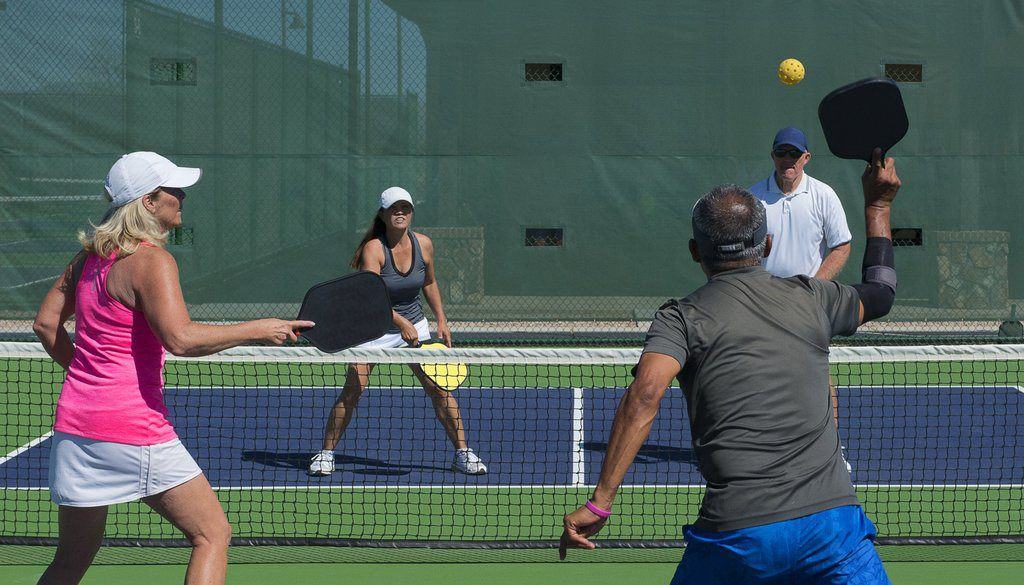 When I first got introduced to pickleball stacking, I must admit, I didn't give it much thought.  I just assumed it was for advanced players.  I thought it was for 4.0 or 5.0 level players only.

What I didn't realize is that it's actually very simple.  And can be an in-game strategy that two players can implement relatively easily and quickly, regardless of skill level.

What is pickleball stacking?  Well, it's a concept in doubles pickleball where during the serve or return of serve, both players line up on one side of the court so that once the ball is hit, they can slide over to their preferred side of the court to optimize the chances of hitting their strongest shot...usually a forehand.

Stacking in pickleball has a few other variations and goals but at its core, it's about getting each player into the ideal position to hit a winning shot.  Let's explore the ins and outs of pickleball stacking and how really anyone can try it.

Related: Check out my simple techniques and tips for beginners on how to improve your game.  If you're interested in reading more about the only online training course for improving your serve - click here.

To put it simply, there are traditional pickleball positions, and then there's pickleball stacking.

In stacking, players move out of traditional positions into more advantageous positions. Typically, this is done to increase the number of forehands or backhands in the middle of the court.

More often than not, it's done to increase the percentage of forehands a team can play.

Why is pickleball stacking so important?  Well, it's most often seen in doubles teams with a right-handed and left-handed player, allowing both players to cover the middle of the court with their forehand swing.

When the stacking has been implemented properly, the opposing team is hitting towards two players in the forehand ready position...even when hitting down the middle.

This can be lethal.  Let's learn more...

Editor's Fun Fact:  Looking for a new pickleball paddle?  Read this guide first! Read how I discovered some types of paddles lead to more miss-hits than others. 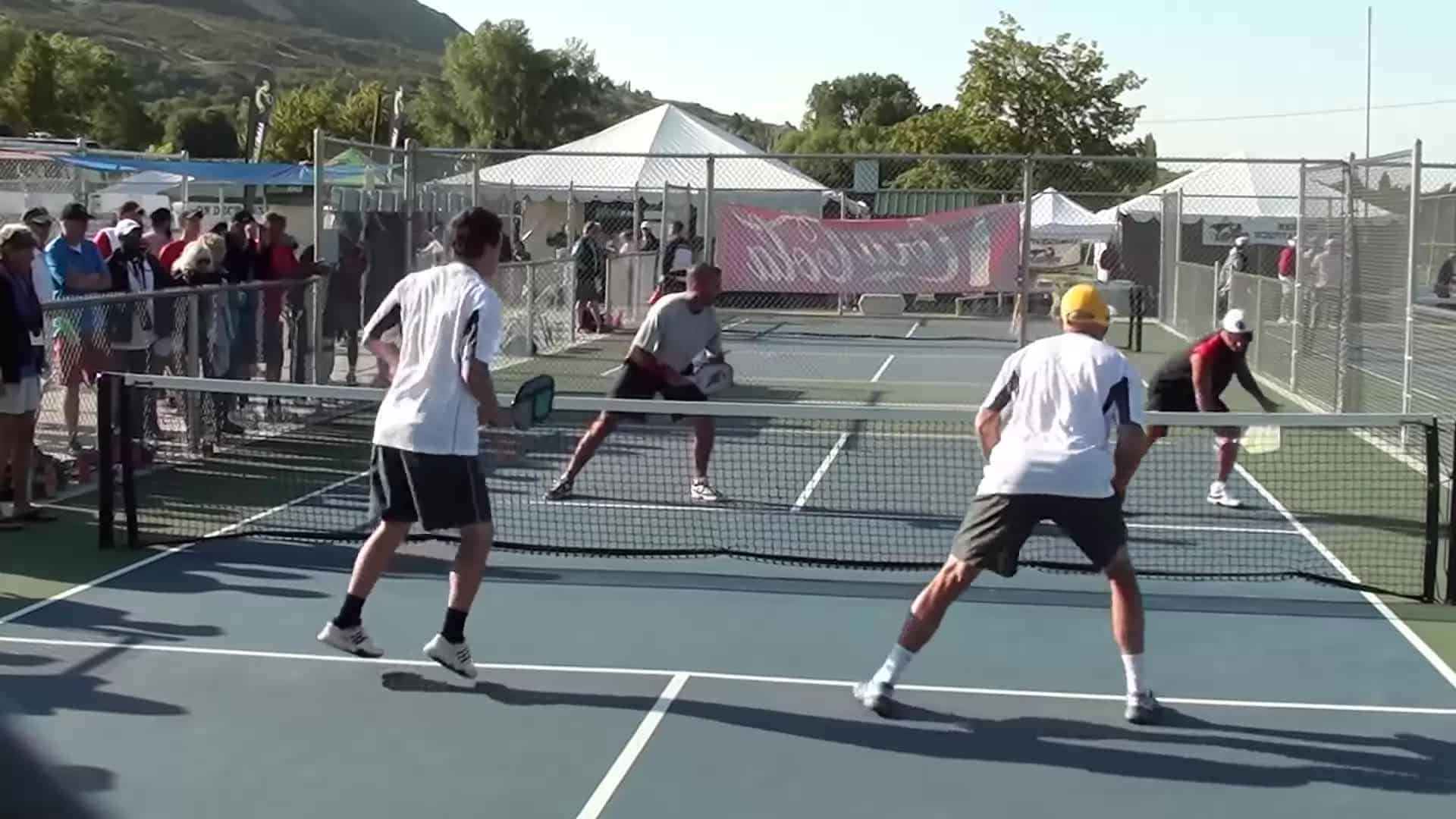 Pickleball Stacking Rules - How is This Legal?

When it comes to where a player can position themselves on a pickleball court - here are no rules!  It's a free-for-all!

Just kidding. There are rules. Specifically, the rules address:

What the rules don't define is what side of the court a player must stand in or hit the ball from.

Basically, the rules apply to the serve and the return. After that, all bets are off. And either way, you can stand anywhere you please on your side of the court (just don't get hit).

Stacking is perfectly legal as long as you are the correct server serving from the correct position.

Your partner can stand wherever they want as long as they don't cross the plane of the net.  This alone makes stacking legal and totally doable!  The server has rules they must follow (like which side of the court they're serving from and who they're serving too) but your partner does not. 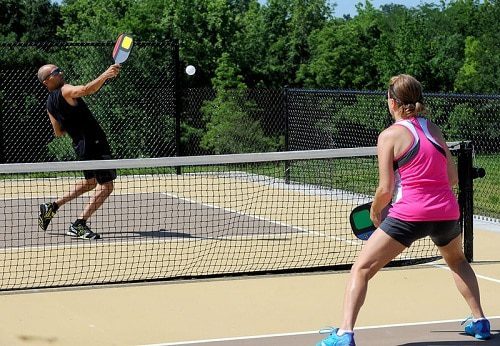 Pickleball Stacking - Why Teams Do It

If you spent a long time learning basic pickleball strategy, it might seem outrageous to learn a strategy with non-traditional positions.

Until you realize that stacking in pickleball allows you to make the most of your team's assets.

Let's say you have a mismatched team--a left-handed player and a right-handed player, each with a strong forehand. Logically, you would want to maximize the number of forehands that both players can make.

Stacking in a left-right combination allows both players to keep their forehands in the middle, rather than leaving a gaping hole down the center.

Of course, left-left and right-right combinations will sometimes use stacking as well. Typically, this is done if one player has an especially strong or weak forehand or backhand, as stacking helps minimize the need for the weaker swing.

Stacking in Pickleball can also help if one player is more athletic than the other.  In that scenario, you'll stack so that the more athletic player can reach balls hit deeper on eitherside of the court.

For the most part though, the most common pickleball stacking strategy is one that allows a lefty to play on the right side and their partner who's a righty, to play on the left side.  Creating an unstoppable vortex of forehand possibilities.

Pickleball Stacking Quick Tip:  If your stacking to give each player proper forehand opportunities like I just described, make sure you've decided upon clear guidelines as to who hits the ball when it's returned right down the middle.    When the ball is hit straight between two players poised and ready to hit a forehand shot, one must stand down while the other takes the shot.

Make sure you decide who does what in that scenario before starting a match.

I've seen too many scenarios where the stacking team was ready for a kill shot but both players thought the other was going to hit it - so no one did.  Point lost.

With all of that in mind, let's talk about how stacking actually works.

In order to understand stacking, you should have a firm grasp of traditional pickleball positioning and serving rules. In traditional positioning, each team starts with one player on the ad side and one on the deuce side.

The serving team rotates after scoring, while the returning team stays on their respective ad or deuce sides.

Pickleball Stacking During The Serve

When stacking on a serve, both players usually start on the same side of the court, with one player sliding to the open side for the return.

So, if Player A (right-handed) starts on the even/right side, the team would stack so that Player A is positioned to the left of Player B, thus allowing them to use their strong forehand.

Stacking wouldn't be necessary if Player A served from the odd/left side since they're already to the left of Player B.

Alternately, Player B (left-handed) should stack in order to play to the right of Player A. If they serve from the even/right side, there's no need to stack.

The same holds true if you have a right-right or left-left team. Players stack so that they play from their strong side.

If you haven't mastered your serve yet, this guide can help. 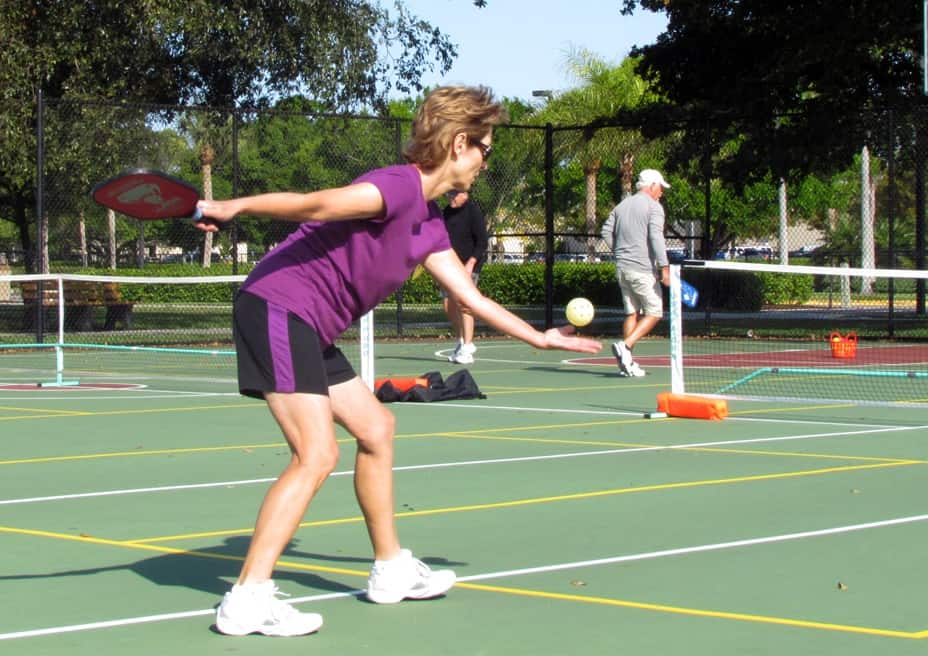 Pickleball Stacking During The Return of Serve

Got that straight? Great. Now let's talk about your receiving strategy.

Think of our right-left team, Player A (right-handed) and Player B (left-handed), both with strong forehands.

With a team like this, stacking is only necessary under two circumstances:

As soon as the return of the serve is hit, the player at the net shifts to the left or right onto the court. The player who hit the return shifts diagonally toward the front of the court.

In our example, we said that the players should only stack under specific circumstances. However, there are some teams that stack for every point.

When a team stacks for every point, regardless of whether they're serving or returning, this is called full stacking. Theoretically, this will put you in the most advantageous position for every point, but it's extremely complicated to keep track of who is supposed to move where.

If you're beginner to even a 3.5 level player, I don't recommend this.

Partial stacking, by contrast, is when teams stack on serves and use traditional positions when returning.

This is much easier for beginning players, as you'll have a far easier time keeping track of who is serving and where they're serving from. The downside is that you'll be in a suboptimal position when your opponents serve.

Pickleball stacking is just one strategy you can deploy for a stronger game. It might take some practice, especially for new players, but once you get the hang of it, you'll wonder how you ever went without!

Looking for more tips to strengthen your game? Check out our pickleball strategy section for more handy posts, like this one on the mental side of the game.

For online training around serving and winning at the net, check out QuickPickle.com...the only online course I recommend made by pros and designed for beginners!

Leave your pickleball stacking examples or stories below in the comments section!  We'd love to hear from you guys!