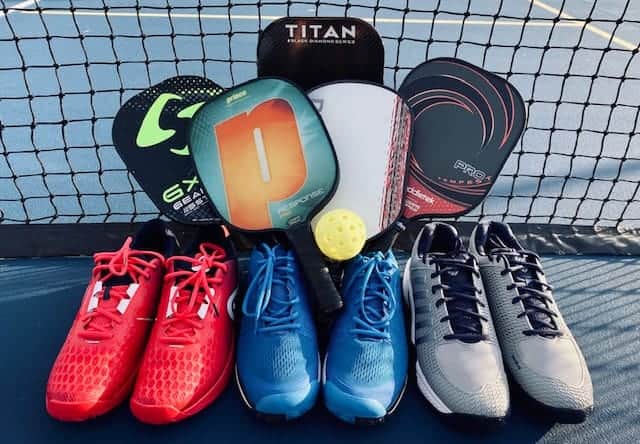 Which pickleball paddle has the largest sweet spot?

After researching, reviewing and playing with two dozen paddles in the past year, I found that the paddle with the biggest sweet spot right now is the Prince Response Pro.

But defining how big a pickleball paddle’s sweet spot was a muddy task; up until about 3 years ago.

Paddle technology has changed drastically in the past three years and with that, the ability to better gauge a paddle’s dead spots and sweet spots has drastically improved.

In addition, I’ve learned a ton by talking to Pro 5.0 Players and I even interviewed the president of large paddle company.

So I’ve learned from the best and as it turns out, a pickleball paddle’s core matters.  A lot.

Keep reading to learn more.  But first, let’s talk about why the Prince Response Pro has the largest sweet spot.

The Prince Response Pro has the biggest sweet spot of any paddle I've played with over the past three years and I've used almost two dozen paddles.  In addition, the Response Pro was the one paddle used by Simone Jardim to win the US Open triple crown - the gold medal in women's singles, women's doubles and mixed doubles! 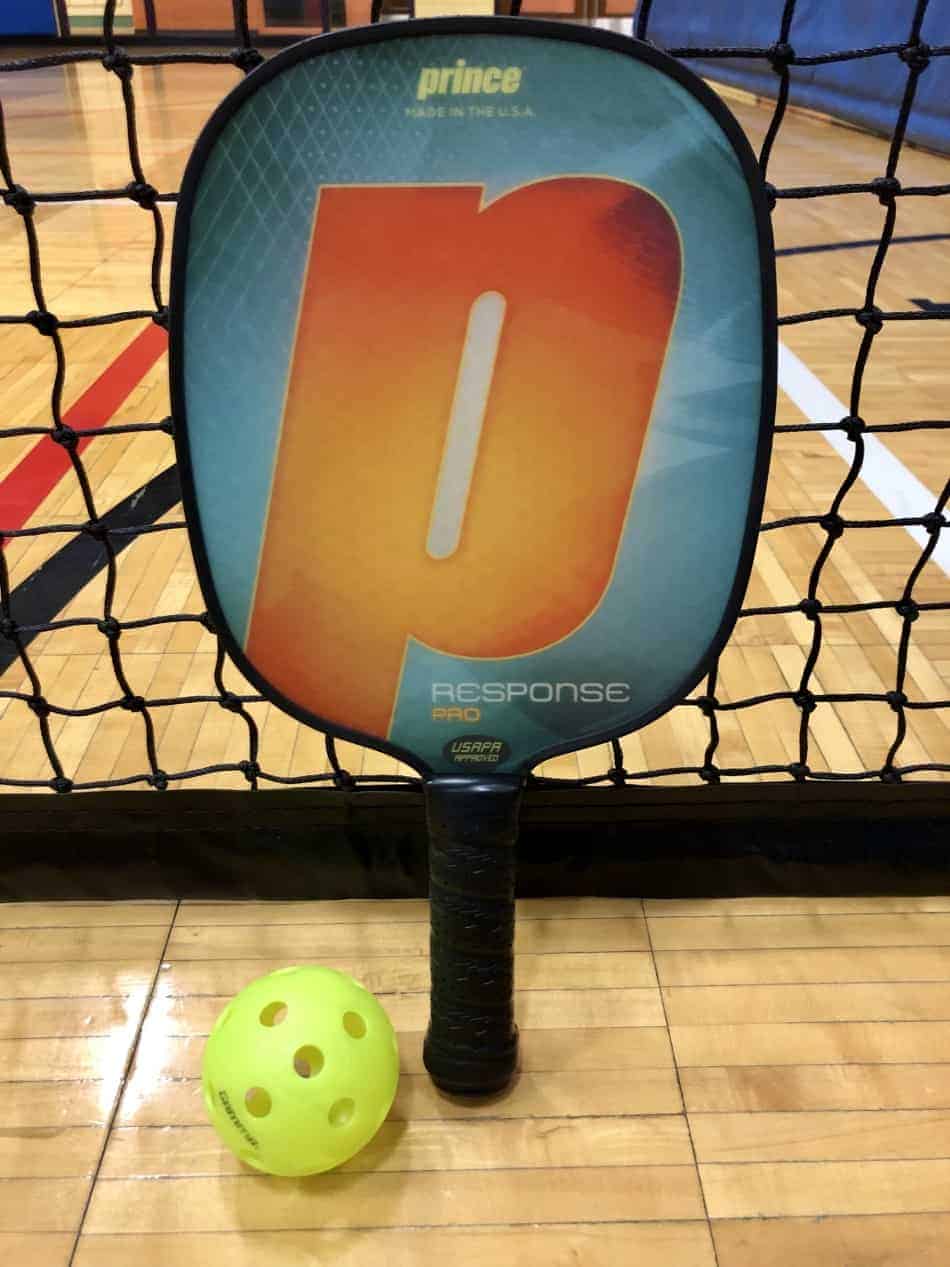 The secret to the ​Prince Response Pro’s super large sweet spot is due to two main attributes:

Prince has been a prominent name in the game of tennis for a very long time but it’s most impactful contribution to tennis, and what put Prince on the map, is how they redefined the shape of a tennis racquet.

Prince is solely responsible for the rounded oval shape that tennis racquets have nowadays and they’ve taken over a decades worth of lessons learned from that shape and applied it to the game of pickleball.

You don’t have to be an engineer to know that the larger the paddle face, the more hitting space you'll have.

The thinner the paddle, the less hitting space you'll have.

So it would make sense that you would maximize the size of the hitting surface by making the largest, wide-body paddle face the USAPA allows.

But Prince took that one step further and applied their patented oval tennis racquet shape to their pickleball paddles -  to create a large, extremely forgiving paddle face.

Prince took this simple yet fundamental aspect of shape, and applied it to the game of pickleball like no other company has done before.

Before Prince came along and entered pickleball, most paddles had a square shape.  Sure, they all have rounded edges but the basic shape has always been square...until now.

So, shape matters and the oval shape works perfect for pickleball.

But the Prince Response Pro has the largest sweet because of another key ingredient.  And this is possibly the most important aspect.

It’s the core.  The paddle core to be exact. 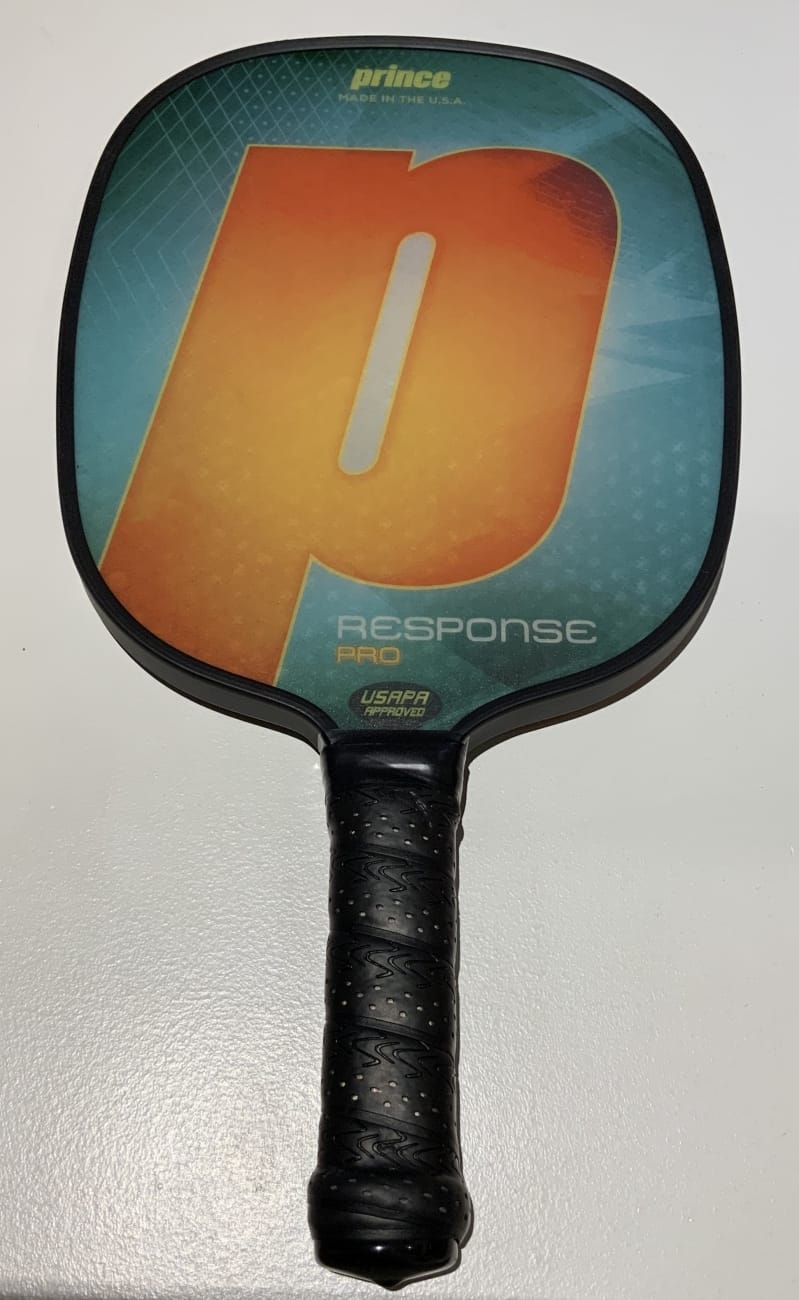 It is made from such high-tech polymer fibers, that it would make a NASA engineer jealous.

Prince chose premium grade polymer and weaved in a hexagon or honeycomb like shape across the entire paddle face.

These tiny little beehive-like honeycomb shapes woven into the polymer are so small and run across every inch of the paddle making the entire paddle face - a sweet spot.

You don’t have to hit the ball in the center of the Response Pro to feel it do its job.  You’ll get a solid, perfect feeling hit, whether you connect properly in the middle or reach and connect near the edge of the paddle.

The response is virtually the same.  Hence the name The Response Pro.

Trust me, I play with the Response Pro a ton.  It’s my favorite paddle.  And I’ve written about how desperation-like backhands turn into game winners with the paddle.

It’s because you can get a good shot from the paddle no matter where you hit the ball from on the face.  I’ve never felt anything like it.

There is a noticeable difference compared to other paddles.

All paddles have sweet spots but the sweet spot tends to fade when the ball is hit off center. 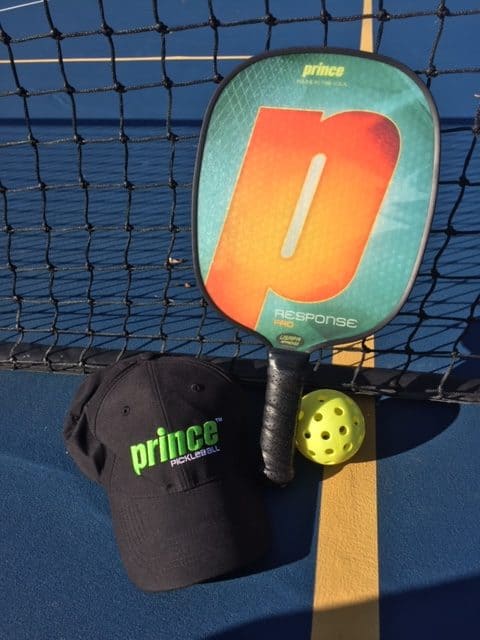 The more off-center from the bullseye you are, the more you’ll have miss hits or even dead spots.

There are no dead spots with the Response Pro.

The whole thing is a bullseye.

"There no dead spots on the Prince Response Pro.  The whole paddle face is like one giant sweet spot!"

What Is The Sweet Spot On A Pickleball Paddle?

The sweet spot on a pickleball paddle is the spot on the paddle where the player gets the best, most accurate response from the paddle and it’s usually in the center of the paddle.  Think of it like the bullseye of a target.

Most paddles have a sweet spot, it just depends on how big it is.  So the questions becomes, how big is the bullseye?

You’ll usually hit the shot you intended if you hit the ball in the dead center of the paddle where the bullseye or sweet spot is.

That’s where the honeycomb core is the tightest and most compact on standard paddles.

But as you go out from the sweet spot (or center), the honeycomb core begins to expand like an accordion...and dead spots begin.

Which is a perfect segue...

What Makes The Sweet Spot On A Pickleball Paddle Big Or Small?

Of all the paddles show here that I own, the Response Pro tops them all!

Like I said, all paddles have a sweet spot.  Some are bigger than others.

But why?  Why is the sweet spot on the Prince Response Pro so big?

Well, it has to do with the volume or amount of polymer honeycomb they’ve used.

Basically, it comes down to how much material the manufacturer is willing to commit to.

Lots of paddles have honeycomb polymer cores.  That’s nothing new.

But if the manufacturer has skimped on the quality of polymer AND the amount they use to run those honeycomb shapes across the paddle face; you’re in trouble.

Less is less.  It's that simple.

Put your paddle company hat on for a minute.  Remember the accordion analogy?

Well, think of these honeycomb shapes of polymer as the guts of the accordion.

If you don’t use much honeycombed polymer, then you’ve got to stretch that polymer across the face of the paddle...creating bigger honeycomb holes as you go out to the edge guard of the paddle.

This creates miss-hit areas or even dead spots.

So on cheaper paddles, the ball may feel good and sound good when you hit it in the center.  But the bullseye is small and only in the center of the paddle because the honeycomb core has been stretched out from there.

The center or sweet spot of the paddle has the most tightly woven honeycomb. So that’s why hitting in the center of any paddle is a good thing.

But hit outside of the center sweet spot and most paddles begin to be less forgiving.  Less expensive paddles have this issue.

Many paddles have polymer honeycomb cores.  In fact, polymer cores are the industry standard right now when it comes to pickleball paddles.

But don’t be impressed by every “honeycomb polymer core” you see online.

Prince did it right.  They used premium grade polymer.  Not the cheap stuff.

And on top of that, they kept the honeycombs tight and small and didn’t stretch it out like an accordion to fit their paddle pace.

In fact, it doesn’t feel stretched at all.

They used a lot more honeycomb polymer across the paddle face so there are no real dead spots and the whole thing feels like a sweet spot.

So how do you know if a paddle is made the proper way when they ALL say the words “polymer” and “honeycomb”?

Look at the price.

I guarantee your $90 paddle has more dead spots than the Response Pro.

Premium polymer and tons of it to keep the honeycomb shapes tiny across the whole paddle but, it comes at a price.  It ain’t cheap.

And neither is the Prince Response Pro.

But I’m here to tell you, it’s worth it.

Which Pickleball Paddle Has The Largest Sweet Spot - Closing Thoughts

I've played with a lot of paddles over the past four years and the more expensive paddles have generally performed a lot better when it comes to the accuracy of their sweet spot compared to paddles in the $60-$80 range.

A lot of paddles have big sweet spots but none as big as the Prince Response Pro.  I've never played with a paddle that has felt this forgiving; no matter where I hit the ball on the face of the paddle.

If you're looking for the pickleball paddle with the largest sweet spot - I recommend the Prince Response Pro hands down.

Got a paddle you think has a massive sweet spot?  Share it with our pickleball community in the comments section!

Graphite vs Composite Pickleball Paddles – A Helpful Guide For Beginners

The Best Pickleball Paddles Under $50 & How To Avoid Junk Paddles