Ping Pong Rules For Dummies – 5 Basic Rules
Does The Ball Have To Bounce In Tennis? A Rule To Remember
What Are The 7 Rules Of Pickleball?
Can You Hit The Ball Before It Bounces In Tennis?
Can The Ball Hit The Net In Tennis? A Simple Answer For Beginners 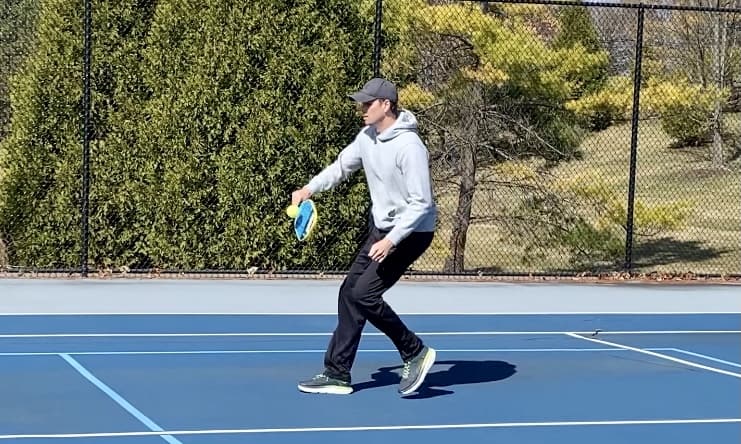 Pickleball has quickly become the fastest-growing sport in the U.S. for ten straight years, but learning the common 5 faults in pickleball and the rules behind them can take some time for beginners to learn. Because pickleball is still relatively young (born in 1965) compared to other racket sports, its rules are still unknown to many new players. This article is designed to help beginners get up to speed quickly on common faults and errors so you can enjoy the game right away.

One of the most crucial aspects of learning the game of pickleball is familiarizing yourself with the major faults that either result in a lost point or a loss of serve. Today, I’ll be covering the 5 most common faults in pickleball so every beginner can get up to speed quickly.

The 5 faults in pickleball that always result in a point won or lost are:

Along with these 5 commonly seen faults, other violations or errors can cause a fault to be called and play to stop. This article will explain the variety of faults that you can commit when playing pickleball. I will also discuss who can call a fault during a game of pickleball and what happens when you do.

Picleball Fault #1 – Hitting The Ball Out of Bounds

Similar to the rules in tennis, if a ball is “out” or lands outside the boundary lines of the court, it is a fault and the rally is over. The point where the center of the pickleball makes contact with the court is considered the point of contact. This point determines if the ball is in or out.

When it comes to the boundary lines on the outside of the court, specifically the baselines and sidelines, the ball is considered “in” if it hits the line. Again, much like in other racket sports, “on the line” is “in” for pickleball as well.

But there is one little exception to that rule when serving…

During a serve in pickleball, the ball must land beyond the no-volley zone line or kitchen line. If the serve hits that line, even just a little, the serve is lost. It must land clearly beyond that horizontal line. The centerline, running from the kitchen line up towards the baseline is ok to hit with the ball during a serve.

That’s still a legal serve. It’s just the no-volley zone line that you need to worry about. I cover all that and more here.

So, if you’re back at the baseline and need to hit a deep shot back, don’t hold back. Gather that power, swing through, and aim for that other baseline. For other simple strategies, check out my uniquely illustrated post here.

Picleball Fault #2 – Hitting The Ball Into The Net

When a player hits the ball towards the net and it does not reach the opponent’s side of the court, but instead falls directly into the net, it is a fault. The fault occurs the instant the ball hits the ground. The team who committed the fault loses the rally and may lose the point depending on who is serving. This type of fault may occur on any type of shot, the serve, the return of serve or any shot afterward.

Since the net is positioned over the court, if a ball touches or clips the top of the net and bounces in the opponent’s court, it remains in play and is not a fault. This also is also the case during a serve since there are no lets in pickleball.

A pickleball net measures 30 inches in height and is shorter than both a tennis net and a badminton net, making it easier to clear the net in pickleball.

Picleball Fault #3 – Not Adhering To The Two Bounce Rule

So, if you’re the return team, you must let the serve bounce no matter how deep or close to the baseline the serve lands. This is why good serving teams serve deep.

On the other side, the serving team then must let the return of serve bounce. Which also why return of serve shots should be deep. But for beginners, this is a tough one. After you serve, it’s easy to let your instincts take over and go running up to the kitchen line and make a play on the ball.

If the return of serve is hit deep (which is often the case because of this rule) and the server goes charging up and doesn’t give themselves enough room to let it bounce before hitting it, the point is lost.

So, if you’re serving, remember to give yourself room on the return so it can bounce. Don’t go charging to the net to hit a volley shot. That’s a fault.

I’ve seen experienced tennis players struggle with the type of fault. So gives yourself time to adjust. Everyone struggles with this fault at some point.

For more on why the two-bounce rule was created, check this out.

A player may not step into the designated non-volley zone, also known as the kitchen, to volley the ball or hit it in the air before it bounces. The kitchen is the 14-foot area near the pickleball net, extending 7 feet on either side of the net.

If the ball is volleyed while standing in this area, it is a fault. In addition, it is a fault if a player touches the kitchen line or steps over it either during or right after volleying a shot.

So if you’re going to hit the ball while standing in this 7-foot zone on the court, the ball must bounce first.

The kitchen rules are unique to pickleball and are some of the easiest to break when learning to play the sport. The kitchen is the physical part of the court near the net, but not the space in the air above it.  Meaning it is perfectly legal to stand at the kitchen line and lean over it to volley a shot as long as you make no physical contact to the kitchen area beyond the line.

You can reach over and flick a volley back over the net but, if any part of you makes contact with the no-volley zone area, for instance, your hat falls off and lands in the kitchen – that is a fault.

For more on faults only pertaining to the kitchen area, check out my Helpful Beginners Guide to Kitchen Rules.

Picleball Fault #5 – A Ball In Play Strikes A Permanent Object

According to Rule 7J in the International Federation of Pickleball 2021 Rulebook, when the pickleball touches or strikes a permanent object, for example a fence, post, or bench, before bouncing, then the team that hit the ball commits a fault and loses the rally.

The official IFP rule book describes this fault as:

“A ball in play contacting any permanent object before bouncing on the court.”

However, if the ball bounces inbounds in their opponent’s court first, and then hits a fence or post, it is not a fault and the player that hit the ball wins the point. The IFP rule book puts it this way:

“A ball in play that contacts a permanent object after it has bounced on the opponent’s court will result in a dead ball. The player who hit the ball shall win the rally.”

Basically what these two rules are saying is that if the ball hits a permanent object like the net post or even a person, before it bounces on the other side of the net it is a fault and the rally is awarded to the non-hitting team.

However, if the ball makes it over the net and lands properly, then hits the permanent object, namely an opponent’s leg or shoe, it’s a fault and the point is awarded to the hitting team.

These may seem like whacky, uncommon faults but in reality, getting struck by the ball happens all the time in competitive play. Mostly unintentionally but I’ve seen it. Hell, I’ve even been a part of it.

When the shots at the net get fast and furious, sometimes the point is won because someone couldn’t get out of the way of the ball quick enough. If the ball is hit hard and chest high, it may sail out of bounds but if it hits you, you’ve lost the point.

This is why some people aim for their opponent’s knees or shins or ankles. Not to be malicious but by using their opponent as target practice. Sometimes your only shot is one where you hit it right at your opponent but hope they aren’t quick enough to hit it back or the do hit it back but it goes ricocheting out of bounds.

Other Faults in Pickleball

Here’s a closer look at these two faults in more detail:

What Happens When A Fault Is Committed In Pickleball?

When one of these offenses, or faults, is committed, the ball is immediately dead, and play ceases. According to Section 8B in the USA & IFP Official Rulebook, a fault called by a player or referee results in a dead ball.  It can result in a point lost by the serving team or a side out.

Besides kitchen faults, you can only call a fault when the ball is live and in play. A penalty is enforced once play has stopped and the ball is dead. The penalty ruling can result in one of three consequences:

Who Can Call A Fault In Pickleball?

Any player or referee can call a fault in pickleball. Any player may call no-volley zone foot faults on either team. Players must give the benefit of the doubt to the player who calls the foot fault no matter where it happened.

Courtesy is an essential element of pickleball to avoid disputes in faults and line calls. If you know that you have committed a fault during play, good sportsmanship dictates that you should immediately call the fault on yourself. Faults should be called quickly and decisively to avoid conflict or questions about the call.

In tournament play, the line judge or referee has priority over making the call and, any player called faults or disputes will end with the referee’s original call getting preferential treatment.

In the end, in sanctioned league play or tournaments, the referee’s call is the final deciding word and the referee has the final say.

Even when playing casually, whoever makes the call when a fault is committed is given the benefit of the doubt. Good sportsmanship is essential for the game to stay fun and move at an acceptable pace.

Overall, the 5 most common faults in pickleball that result in a point won or lost are hitting the ball out of bounds, hitting the ball into the net, not adhering to the two-bounce rule, stepping into the non-volley zone, and the ball hitting a permanent object like a player.

There are more faults than that in pickleball but those are the most common five any new player will need to learn to pick up the game quicker.

The quicker you get a handle on these 5 faults in pickleball, the quicker you’ll learn the game and the more you’ll enjoy it.