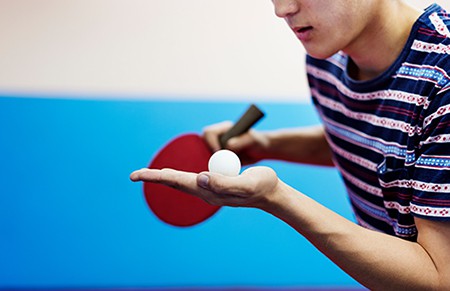 What Are Illegal Ping Pong Serves? 5 Serves That Are Actually Illegal

In a game of ping pong, the serve represents the start of the game and the start of each point. But it’s much more important than that. A lethal serve can put your opponent on their heels. But not every serve is a legal one. So, what are illegal serves in ping pong?

An illegal serve in ping pong is one where the server doesn’t show the ball on the open palm before the toss, doesn’t toss the ball 6 inches or higher in the air, and adds spin to the ball during the toss.

Some examples of illegal serves in ping pong are:

In this article, I’ll go into detail about each of these illegal serves, explain why they’re illegal, and give you tips on how to avoid these types of mistakes if you’re a beginner.

Before we get into each type of illegal serve, it’s helpful to review the rules of a serve in ping pong so we know what a legal serve should look like.

A legal serve in table tennis is one where the ball starts on the open palm of the server’s hand and is tossed up at least 6 inches without any spin on the toss. Then the ball is struck and must bounce on the server’s side, clear the net, and then bounce on the opponent’s side before being returned.

A serve must incorporate all six of these components to be considered a legal serve in ping pong. If your serve doesn’t adhere to even one of these qualifications, it is deemed an illegal serve.

The rules of ping pong state that it’s illegal to hide the ball in your off-hand at any point during the start of a serve. So, a hidden serve is one where the ball is concealed or hidden in the off-hand of the server before they toss it up into the air.

Fun Fact: Hidden serves used to be allowed but were eventually outlawed by the International Table Tennis Federation.

During this type of serve, the player would typically hide the ball behind their body or free arm. This would confuse the opponent, as they could not see where the ball was coming from, giving the server an unfair advantage.

Additionally and even more importantly, the opponent cannot tell if the ball is coming at them with spin or at an odd angle and cannot prepare for a proper return shot.

Despite being illegal, hidden serves are still the most common because new players don’t even realize they’re doing them. Most beginners don’t realize that the server must show the ball on their open palm before tossing it and serving.

2. The No Toss Serve

Before making contact with the ball and paddle, the server must toss the ball first. A serve without a toss (of 6 inches or higher) is considered an illegal serve. This is why you see pros or Olympic players toss the ball up high before hitting it.

But, the reasoning behind this illegal serve and rule might surprise you.

While tossing the ball first does allow for the returner to track the ball and know where the serve is coming from (versus being hidden like above) the toss actually benefits the server more than the returner.

Any coach will tell you, the goal of a good ping pong serve is to make contact with the ball at about the same height as the net. A high toss allows you to track the ball and hit it at just the right height as the ball is coming down.

Net height is the ideal height.

Nonetheless, a ball that is not tossed, is technically an illegal serve.

Here’s the thing though. Most beginners or even casual players don’t do this. If you’re playing a casual game amongst friends, you’ll probably see a no toss serve where the server simply hits the ball from and out of their other hand.

This is sometimes referred to as a “drop and hit” serve.

While this is technically illegal, depending on the setting and the circumstances it might be allowed. I know I’ve played with family when a no toss serve is allowed and the game is more casually played.

So, it’s up to you as to how hard you want to enforce or eliminate this illegal ping pong serve.

Any serve where the server imparts spin on the ball during the toss is considered an illegal serve. No server is allowed to spin the ball while tossing it before making contact with their paddle.

Because in the game of ping pong, paddle technology has grown leaps and bounds in the last 15 years and the paddles themselves are capable of extreme spin.

Especially the specifically designed rubber that more expensive paddle come with. This rubber has the ability to grab the ball and manipulate it for massive amounts of spin. Whether it’s topspin or backspin, newer paddles can impart a ton of it.

So, if the server is adding their own spin during the toss, then makes contact with a spin-centric paddle, this could lead to a competitive advantage. This is why spin serves are illegal in ping pong.

In a low toss serve, the ball is tossed too low or not at all. This allows the server to play a faster ball or a ball with more intense spin. This is the main reason why the “low toss serve” is illegal.

This serve is sometimes done on accident by inexperienced players. However, even unintentionally, it can have a negative impact on the opponent’s game and will still earn you a penalty in regulated play (like a tournament).

Not tossing the ball up high enough gives the server an unfair advantage because their opponent isn’t allowed to track the ball as easily and it takes less skill and focus to hit a low-to-the-table serve when the ball is already tossed low.

Low toss servers make it easier for the server to hit a low arching serve over the net.

It evens the playing field between the server and the returner by forcing the server to toss it higher. It is more difficult to hit a low and accurate serve when the ball is tossed up 6 inches or higher. This balances out the advantage given to the server.

Fun Fact: Did you know there is a paddle sport that actually takes away the advantage from the server?

5. The Too Quick Serve

The last illegal serve I’m going to examine in this article is the quick serve. This serve is when the server plays the ball very quickly, especially when they notice their opponent is not ready. They will typically serve it straight and fast, almost guaranteeing them a point.

This serve is illegal and unfair to the opponent because they are not ready to return it. Both players must be ready before the next point begins.

While your eyes should always be on the ball and you should be ready to play, it’s important to show good sportsmanship if your opponent needs a break or is taking a breather.

This means being gracious and considerate of your opponent especially if they’re not ready for you to serve. In short, you should always be a good sport no matter what type of competition level you’re playing in.

Outside of the basic rules around serving that I’ve already outlined (so that you don’t commit an illegal serve), there are a few basic ping pong rules every beginner will want to know.

Additionally, each player is allowed to serve twice. Then the serve goes to the other player and they get to serve twice. It’s a two serve, then switch serving system in ping pong

Another basic rule is that the ball can never bounce twice, no matter what is happening during the point.

Points are commonly awarded in ping pong when:
1. The ball bounces twice
2. The ball doesn’t land on the other side of the table
3. The serve never makes it over the net
4. The ball lands into the net

In singles play, you are allowed to serve to either side of your opponent. Essentially anywhere on the other side of the net. In doubles play however, you must serve to the person diagonally opposite of you.

Games are played to 11 and you must win by two points.

For my complete guide for ping pong rules for beginners, click here.

What Makes A Shot Illegal In Ping Pong?

The most important rule of legality in ping pong is to make sure the ball is visible at all times to your opponent. If the ball is hidden during the serve or during the time of play, the play or shot will be deemed illegal.

You cannot hide the ball at any time with your body, paddle, arm, or hands because the opponent cannot see the ball. Its common sense when you think about it.

Your free arm must also be kept out of the way during play. If the ball hits your free armm(your hand not holding a paddle) then it is illegal.

Having your free arm in the way is a commonly violated rule, but it’s usually unintentional.

In summary, an illegal serve is one where the ball is hidden to the returner, not tossed up high enough or not tossed at all or is tossed with spin. An illegal serve can consist of one or all of these elements.

Depending on the style of play – whether it’s casual and recreational or more formal, you may choose to adhere to these serving rules strictly or not at all.

But, if entering competitive play like at a tournament all of these factors and serving rules will undoubtedly be in play and enforced.

My hope is that after reading this article you have a clear idea as to what makes an illegal serve in ping pong and how to avoid these common mistakes.

Can You Hit The Net In Ping Pong? A Simple Answer For Beginners