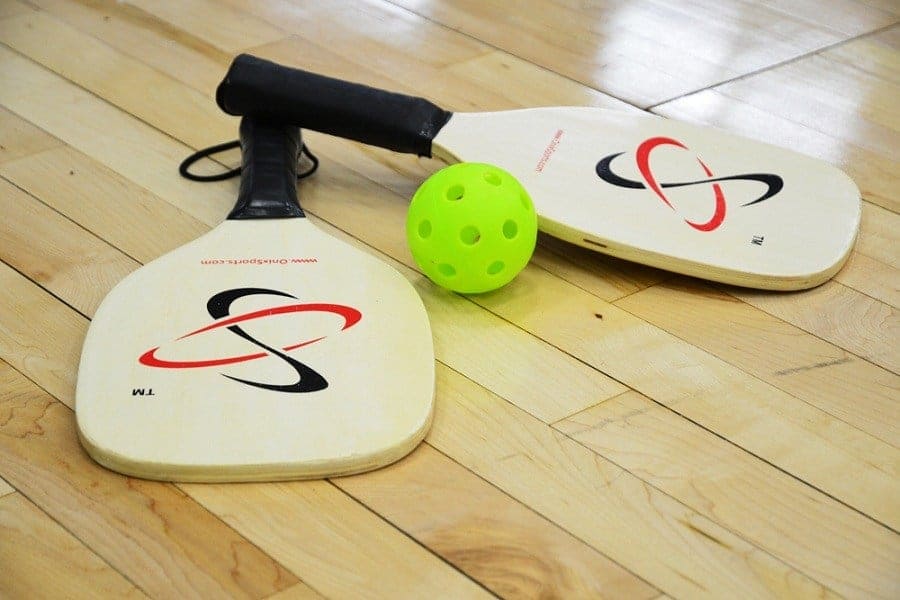 Welcome to our weekly series entitled The Pickleball Blog - New Player Diary. We've recruited a brand new player to the game of pickleball and he's agreed to allow us to chronicle his development from newbie to 4.0 player!  Join us as we document all the lessons he learns (both good and bad) and track his development as he improves week over week and month by month.

We'll keep this beginner players name ​anonymous so, let's just call him "B".

The focus of this Pickleball Blog update from B centers around two on-court mind sets that have helped him win more points.  They are simple concepts but require discipline to implement and remember to do.

The first on-court technique B learned and applied this week is to always keep moving.  Even when you've run and jump-stopped at the net, B told us that when he kept moving, even a little, it helped him react to the ball quicker.  He began by bouncing slightly on the balls of his feet to keep him from settling into "cement legs".  Cement legs is when you get to your spot on the court and don't move your feet.  They're like cement bricks stuck to the court.  When B didn't keep moving, his cement legs forced him to reach for dinks and volleys versus staying ready and shuffling towards the ball.  B explained that when he reached, his shots or returns were far less accurate.  It makes sense, because you're out of position.  When you're out of position, you're form and technique suffer. Resulting in poor shots. B told us that he saw beginners, like himself, having trouble anticipating and moving towards the ball.  They tend to wait for the ball to come to them.  They stand around and wait.  And consequently, they don't win a lot of points.  So, when B recognized this, he made a change and saw improvement in his shots, and points began to get extended...and won!

Finally, B let us know that he finally realized how pickleball is a game of patience.  Being aggressive and going for the kill shot has it's place but it doesn't always yield the best results.  B saw that the class of players above him, played it safe.  They kept the ball in play, set themselves up for easier shots, and forced more difficult shots onto their opponent.  Essentially, B learned that a safe offense is the best offense a lot of times.  When you stay patient and let your opponent make the error, you win a lot of points.  Picking and choosing when to be aggressive and when to stay safe and keep it in play is the challenge.

Lesson #5 - Be ready and keep moving.  Stay patient and let your opponent make the first mistake.  That's a recipe for success as a beginner.

In today's Pickleball Blog update, B talks about his inconsistency early on and his frustration with inconsistency.  B learned that as he progresses in his development, sometimes bad shots, particularly when at the net, can be debilitating.  B told us that as the game began to slow down for him and he saw things on the court a little better, the erratic play that reared it's ugly head starting having a negative effect on him.  He basically said, he'd have "ups" and "downs" but his "downs" starting outweighing his "ups" and his frustration level began to rise.  This made the game less fun.  So, what did he do?  It's simple, he starting practicing "the 3 second rule." The 3 Second Rule is a rule where you give yourself three seconds to recognize the negative feelings inside of yourself, then move on.  It's a simple mental technique used by many athletes.  Most athletes use a version of this approach in one way or another; particularly when their individual effort is what separates winning from losing.  For example, tennis players use it, golfers use it after a bad shot, pitchers use it after a bad pitch or after giving up a home run. Quarterbacks use it all the time and basketball players use it at the free throw line.  Regardless of the sport, the important part here is to give your ego the chance to react, briefly, then move on.  For good.  That's the trick, moving on for good.  It's easier said then done.  Don't let the last point ruin your next three or four shots.  That's what B learned.  He recognized it, confronted it, and made a behavioral change that was healthy for his pickleball game.

For more on how to move on from a bad shot, check out this article from Training for Optimal Performance.  It's a golf example but the idea applies to pickleball as well.

In this week's installment of our Pickleball Blog Diary, B gets a new paddle.  B's progress during his first three weeks of play has been steady.  B is weight lifter so he instinctively used muscle to over power his competition at first.  But he soon realized that with power, especially with an older wooden paddle, you loose accuracy.  He was still using the free wooden paddles his YMCA offers to pickleball players so he wasn't using the most accurate paddle to begin with. Add in the fact that he was "hulking" his way through shots at the net and you've got a better idea as to some of the challenges he faced as he got better.

With a wooden paddle, you get decent pop off of the face of the paddle, but accuracy and consistency begin to wane...and B could feel it.  That's when one of his new pickleball buddies offered him a solution.  He offered to let B borrow his old graphite paddle. His friend had just purchased a new Paddletek paddle and was no longer using the Champion Graphite he'd used for years.  He saw B struggling (like we all have) with the wooden paddle and said to B "borrow it for as long as you'd like.  I think you'll see better results."

B did.  Immediately.  The reaction time was quicker and his shots went to where he was aiming more often.  Not to mention, the graphite paddle was as light as a feather!  Even the grip, which was longer, fit in his hands more naturally compared to the wooden paddle!  He'd been given a better paddle, and the upgrade in newer equipment was felt day one!  Having a lighter, more accurate paddle that seemed to make better and more contact with the ball, was making the game easier and more fun for B!

​This week "B" finally got on the court.  Using the lesson he learned last week, he made sure he was joining the proper walk-in group.  After two hours of playing B was hooked!  Pickleball has sucked him in and he was immediately a fan.  He hit some good shots, some bad realized pretty quickly that he couldn't step on the court and dominate.  In fact, he realized he was stepping, running, shuffling, back pedaling and cutting in the wrong pair of shoes.  Before leaving the house that morning, B had thrown on his running shoes.  The same ones he works out in and thought they'd work just fine.  He was wrong.  An hour in to his first session and his calf and heel began to ache.

One of the fastest ways to ruin your day and leave the court, for good, is to wear the wrong pair of shoes.  Proper court shoes are a must.  Some of the most common injuries that occur most frequently can be prevented by wearing good indoor/outdoor court shoes.  B learned this quickly.

Before his next day of playing pickleball, B read about The Best Pickleball Shoes for 2017​.  He selected the Men's Gel Rocket 7.  He got a great pair of court shoes that he can use for indoor or outdoor play for under $50!  That's a great deal and more importantly, he kept himself out of harms way.

B immediately noticed an improvement from his new court shoes when it came to his lateral movement.  He was able to cut left and right a lot better than in his running shoes.  His lateral shuffling improved and he felt more secure.  No more tender calf and achilles pain!  Aside from a good paddle, wearing proper court shoes are a must.  If you're looking to avoid common pickleball injuries, buying court shoes should be the first thing you do.

B began playing this month, March 2017, so he literally is brand new to the sport of pickleball.  He would see people playing at his local YMCA and always wondered if he'd enjoy it.  His local YMCA has two categories of play - a walk-in group and a more advanced group.​  This brings us to first lesson "B" learned as he began his pickleball journey.

"B" decided on a whim that he'd skip his daily workout and finally take a stab at pickleball.  He'd seen many groups playing on the courts below the jogging track and spontaneously, "B" decided today was the day.  Without a pickleball paddle, without proper shoes and without a care in the world​, he walked in, sat down and waited his turn.  A few minutes passed by and he realized he should grab a paddle.  Without knowing how to choose a paddle, he selected a vintage wooden paddle from the "free to use anytime because they're wooden and we don't care if you break them" rack the YMCA provides as a courtesy to it's members.

He had his paddle and he had his game face on, all he needed now was to wait his turn.  Well, 10 minutes turned into 30 min and he was still sitting on the bench feeling like an outcast.  That's when he learned his first pickleball lesson.  One of the younger players kindly walked over and inquired who "B" was and how he could help him.  B introduced himself and told his new pickleball buddy he was here to play.  Well, dominate actually.  To B's surprise, the group he'd been watching was not the normal walk-in crowd he'd seen the day before.  This was an invite only group of 4.0 and 5.0 players.  Oooops!

Lesson #1 - Always inquire about the group you're about to join.  There are walk-in groups for all skill levels, and then there are more advanced groups that tend to be invite only and rent the gym space for a period of time.  Know which is which before you sit down.  :-)​

How To Lower A Tennis Net For Pickleball – The Easy Way