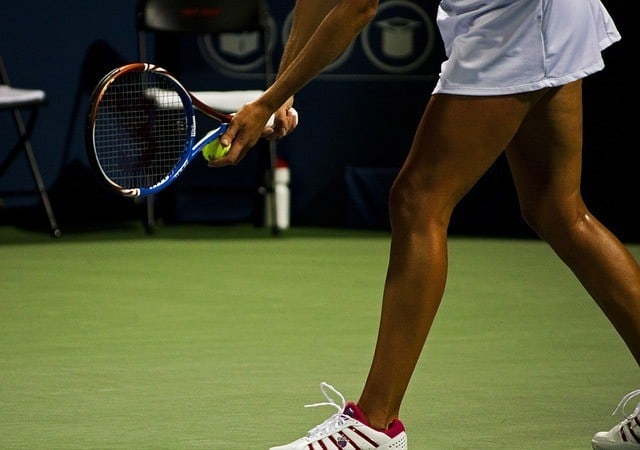 There are many subtle intricacies of tennis and its rules, and one of the stranger ones revolves around serves and let serves.  Knowing how many let serves you get in tennis can be a strange rule to get accustomed to, especially coming from other racquet sports.  So, just how many let serves are allowed in tennis?

But, there are a number of reasons why a let in tennis could be called. In addition, knowing when to call a let and how many let serves a player may take is something every new player should know.  So, that’s what this article is all about. Stick around and “let” me help you.

First, let’s answer the most basic questions around a let serve.

What Is A Let Serve In Tennis?

Fun Fact: Let serves are known as “service lets” and are the most common form of “let” in tennis.

The let can be anything from an unexpected stroke of luck to a minor annoyance, depending upon different factors. When the server hits a let rather than a fault on the second serve, it gives them another chance to serve the ball and prevents them from losing the point. In this case, the server would be relieved to have hit a let since it gives them another chance to win the point. 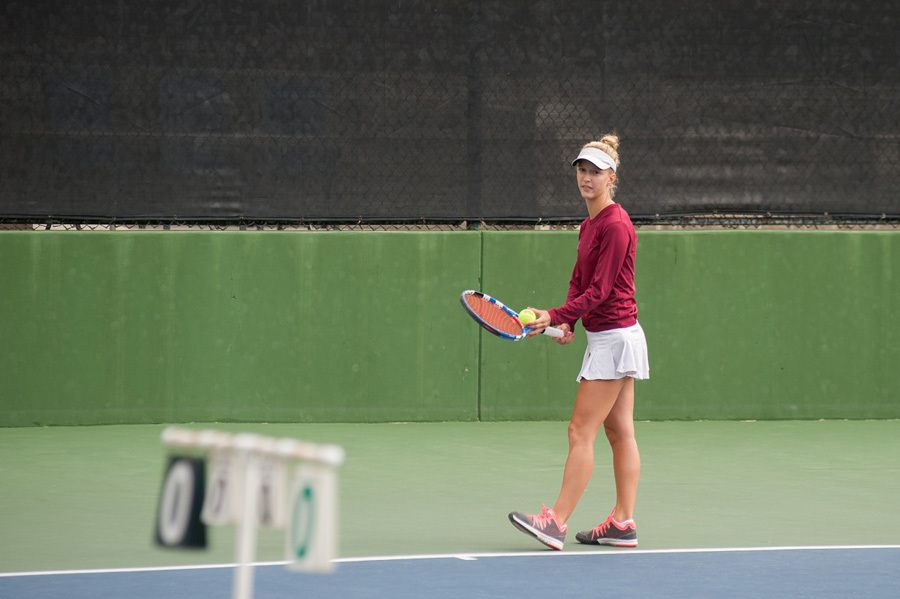 Why Is It Called A “Let” In Tennis?

It’s called a “let” in tennis because the phrase was adopted from a German word “lettian” which means ”to hinder” and a second French word “filet” which was shortened to “let.”  Together it is implied that when something has “hindered” your serve, your opponent will “let” you serve again.

This is the abbreviated history from two foreign words mean separate things but when combined make up the spirit of the rule.

Nowadays, a much simpler explanation has been adopted.  The “let” in tennis means, “I’ll let you serve again” when you’ve hit the net or something has interfered with play.

Not every racquet sport has this “let serve” rule though.  Pickleball for instance has no let rule.

So, it's important to know that this is NOT a universal service rule across other similar sports that involve a racquet or a paddle.

What Is The Difference Between A Let And A Fault In Tennis?

Here’s an example of how each would work.  Let’s start with a “let.”

The server receives two serves at the beginning of each point. Hitting a service let allows the server to replay the point, taking two additional serves; or, on a second serve, to receive one other serve.

Now let’s talk about a fault, or service fault to be more exact.

With a service fault, however, on the first serve, the server receives one additional serve. If the server hits another fault on the second serve, the server loses the point. This occurrence is known in tennis as a double fault and is an easy way for a receiving player to win the point.

But that’s just a service fault.  There are other types of faults in tennis to be aware of.

Fun Fact: When a server tosses the ball and doesn’t hit it but allows it to bounce, this isn’t a let or a fault. The server may then try the serve again without penalty. 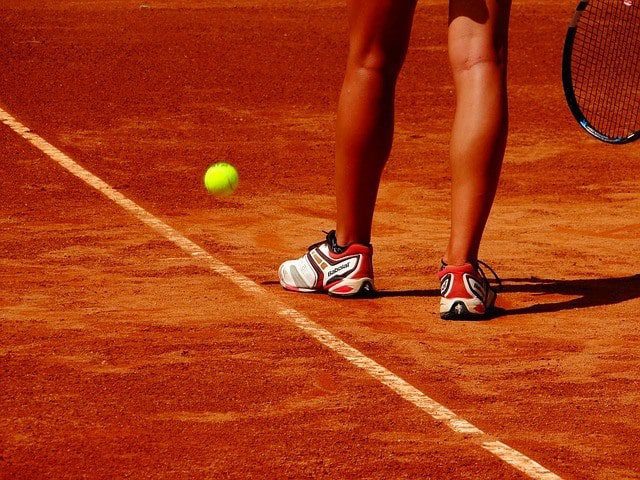 Are There Different Types Of Lets In Tennis?

Yes, there are many instances in tennis where a fault outside of a service fault can be called.  I’ll outline them all below but just know that by far, the most common type of “let” in tennis is a service let where the ball has struck the top of the net and still landed in.

Let’s examine other “lets” in tennis and when they might occur.

Another common let seen in tennis is when an unforeseen and distracting event occurs during a tennis match, a let should be called as soon as possible.

A let can also be called when the receiving player wasn’t ready to receive the serve. In addition, an on-court distraction such as a stray ball or an object blowing onto the court is grounds for a player to call a let.

A distraction that affects play and breaks the concentration of a player can be called a let. When other matches are in play nearby, and a ball inadvertently rolls onto your court during play, you may call a let and replay the point.

Another situation is when an object makes its way onto the court during a point, for example, when the weather conditions are windy. Again, in these situations, you should make the let call in a very timely manner to avoid confusion about it.

Tennis Tip: If you’re attending a professional tennis match, keep in mind to remain seated while the ball is in play to avoid distracting the players. An umpire may call a let if a spectator is moving around the stadium during a point.

In General - How Many Let Serves Are Allowed To Be Called In Tennis?

There’s no limit to the number of lets that may be called.  If a player serves a let on the first serve and in the process of replaying the point, immediately serves another let, they’re awarded another let and may replay the point.  This process can continue until the player either serves the ball in or commits a fault.

So, can you actually have a let on a second serve?  The answer is yes, however when the let occurs on the server’s second serve, they only get one let serve to try again.

Fun Fact:  The record number of lets served in professional tennis is four for both Serena Williams in 2013 and Di Wu in 2017.

So, how many times can the server serve in tennis?  Technically, it’s unlimited. As long as the let serves are indeed lets, the server would have an infinite number of serves.

Keep in mind, when it comes to how many let serves are allowed in tennis or how many other lets calls are allowed - there is no limit.

What Are The Let Rules In Tennis?

Many people new to tennis think there are a whole host of rules that revolve around let serves when in reality, this just simply isn’t true.  This is a common misnomer to beginners learning tennis for the first time. The truth is there are just two rules around lets.

What Is The No Let Rule In Tennis?

The “no let” rule is exclusive to college tennis and states that if the serce hits the next but still lands in, it is a playable serve.  Professional tennis has yet to adopt this rule but governing tennis bodies have considered it.

The topic of enforcing the no-let rule in professional tennis is a hot button topic.  Many firmly believe that it should be changed much like sports like pickleball has done.

Others preach about holding true to the purity of the game and not giving into pressures driven from other racquet sports and keeping tennis, the granddaddy of them all, the same as its always been.

In my opinion, the fact that collegiate tennis no longer enforecs let serves is a sign that times are changing and I wouldn’t be surprised if pro tennis follows suite in the near future.

But how big of a change does this really have on the game of tennis?  Not very big if you ask me. The fundamentals of the game still ring true and become no less important. 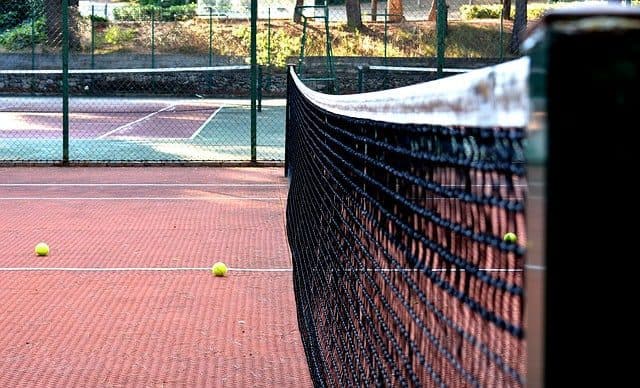 When Should a Let Be Called?

You should make all let calls as promptly and quickly as possible to avoid confusion and dispute over the call.  According to the US Tennis Association, the let should be called before the return of serve is off the court or is hit by one of the players on the service court.

Tennis is a courteous sport, and in keeping with that polite spirit and avoiding any confusion about the call, you should call a let immediately. The player calling the let should announce it by calling out the word “let” loudly so that all players on the court can clearly hear it.

Who Can Call a Let?

Tennis rules allow an umpire or any player on the court to call a let in both doubles and singles. In professional tennis, there are electronic sensors that can detect a let. This electronic apparatus can detect even slight vibration caused by the ball touching the net.

The name of the system is Trinity, and German engineer Dietmar Brauer developed it. Professional tennis players may not challenge a let call.

When Is a Let Not Allowed In Tennis?

A let isn’t allowed with the No-Let Rule, a provision in college tennis wherein a serve that touches the net, strap, or band of the net but lands in the service box and remains in play. In certain situations, this rule is implemented with the permission of the sanctioning body.

There’s a provision for playing tennis matches where no lets are allowed. Friend At Court: The Handbook of Tennis Rules and Regulations, 2021 Edition, states that play with the No-Let Rule may, at times, be allowed. This is more proof that the game is headed in that direction.

But again pro tennis hasn’t officially adopted this rule despite discussing it many times.

How Many Let Serves Are Allowed In Tennis - Conclusion

To sum up, a let is a rule of tennis that allows for the point to be replayed. You may call a let when a serve tips the net or when there’s some hindrance or distraction on the court.

Service lets are by far the most common form of let in tennis today.  It’s one of the many rules of tennis that has been debated for many years now.   Let serves are a tradition in tennis that is as old as the game itself.

It is a simple rule but many beginners don’t realize that with this rule, the number of lets serves you’re actually allowed is technically unlimited if the serve after hitting the net still lands “in”.  Hopefully after reading this article, you are more knowledgeable about the rule and are more comfortable calling a let during a match!

What Is A Drop Shot In Pickleball? A Helpful Beginner’s Guide